‘It’s about trying to own the narrative, which is usually out of our hands.’ 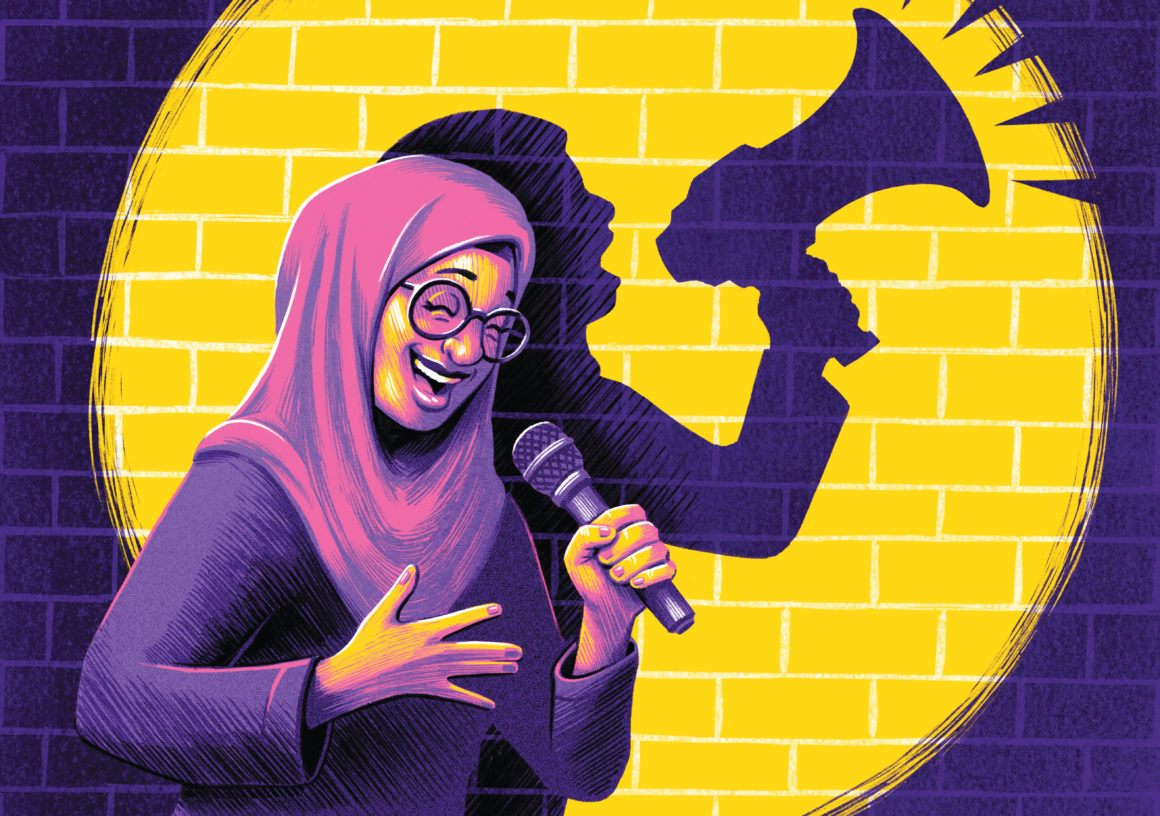 Headscarves, ISIS, Islam — for Sadia Azmat, the controversy around these words in Europe isn’t something to run from; it’s fodder for her best jokes.

“I do draw the line at covering my face, because I’m a standup comedian and, you know, where would the mic go?”

Her job, Azmat, 29, says in her thick East London accent, “is to entertain.” She’s wearing jeans, a light pink headscarf and subtle make-up. “But if what I say can open up people’s minds, that’s brilliant.”

A growing number of women like Azmat — who performs most nights and hosts a podcast called “No Country for Young Women” — are using humor to confront prejudice and shine a light on what it means to be female and Muslim in Europe.

“I like to do comedy to shake things up" — Ellie Jokar, Iranian-born Danish comedian

And at a time when populist parties and governments are trumpeting Islamophobic or anti-immigrant messages on the Continent, many feel it’s become even more urgent for them to find their voice and tell their own stories.

“Some people think my parents make me wear the scarf, and that’s not true,” Azmat tells the audience. “No one in my family wears a headscarf, and they don’t even like me wearing it. Like, sometimes when I leave the house they say, ‘Why are you wearing that, people will think you’re going to blow up the bus.’”

When she takes the stage “it’s about trying to own the narrative, which is usually out of our hands,” says Azmat.

Muslim women living in Europe face a triple threat of discrimination: bias against their ethnicity, religion and gender. In an already hostile environment that targets Muslims for “not belonging, not sharing European values,” women are particularly vulnerable, says Georgina Siklossy, a spokesperson for the European Network Against Racism.

“I draw the line at covering my face,” says Sadia Azmat. “Because I’m a standup comedian and, you know, where would the mic go?” | Photo by Idil Sukan

It’s against this backdrop, odds stacked heavily against them, that female Muslim artists, comedians and activists are speaking up about the complexity of their identities and experiences as women, immigrants, Muslims. And they’re using humor as a way to speak directly to those in power and shed light on the inconsistencies and ironies of their anti-immigrant rhetoric.

“I like to do comedy to shake things up,” says Iranian-born Danish comedian Ellie Jokar, 38, who has thick curly black hair, deep-set green eyes and tattoos on both her wrists.

Her comedy show is the first in the country to be hosted by a Muslim woman, and the most common target of her jokes are extremist, anti-Muslim politicians.

In one of her bits, Jokar impersonates her mother — a deeply religious woman — to speculate that the far-right politician Inger Støjberg backs anti-immigrant policies because she hasn’t found the right man. “Poor Inger, she never got married,” the bit goes. “If she got laid more, she wouldn’t be so mad at the rest of the world.”

“When I moved [to Denmark] in the ’80s, they were taking in refugees with open arms,” says Jokar. That all changed in 2015, when the government entered into coalition with the Danish People’s Party and started to push immigration reforms that painted Muslims as a threat to European values.

Since then, the country has banned the burqa, poured money into heavy campaigns to urge Muslim women to “join Danish society” and “take off [their] veils.” The government has also introduced controversial policies — such as language lessons and tougher sentences for crimes committed in so-called ghetto neighborhoods — to force immigrants to integrate into Danish society.

With her comedy show, Jokar says she wants to steer people away from easy generalizations of immigrants born out of fear, and redefine what it means to be Muslim in Denmark.

“But what really affects people and can make a change is art in general, from music, literature, cinema and — why not — comics too" — Takoua Ben Mohamed, cartoonist

“A lot of people think Muslim girls are not allowed to speak up,” says Jokar. She wants to lead by example as a “strong brown woman,” she adds.

Jokar has been publicly attacked by Italian politicians and was forced to hire a bodyguard when she received death threats from within the Muslim community, who took issue with her depiction of Islam.

But humor, she insists, can break down barriers, and things have already started to shift. “I believe it opened a debate.”