By Inka Piegsa-Quischotte for BBC

Despite Spain being home to many North African immigrants, Spaniards who convert to Islam – particularly the order of Sufism – are a rarity.

“My name,” said the lady, clad from headscarf to sandals in shades of pink and purple, “is Bahia, which means ‘ocean of beauty and compassion’ in Arabic. Welcome to my school.”

Tea was poured, sweets were proffered and we sat down in the shade of more than 100-year-old olive trees in the backyard of her tiny Montessori school to talk about Sufism, the mystical branch of Islam.

But we weren’t in a Muslim country – we were in the south of Catholic Spain.

Órgiva, located approximately 60km southeast of Granada and tucked away in the Alpujarra mountain region, is an extraordinary place. The small town’s population is just under 6,000 – but amazingly, this comprises 68 nationalities, as well as the Buddhist community O.Sel.Ling and a sprawling tent camp of Rainbow people (a group committed to principles of non-violence and egalitarianism) called Beneficio. 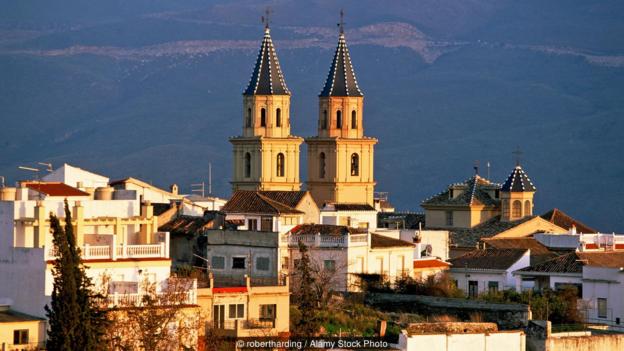 But I’d come to this mountain wilderness to meet the largest of the cultural communities: 35 Sufi families who have converted from Catholicism and settled here.

Despite Spain being home to many North African immigrants, Spaniards who convert to Islam – particularly the order of Sufism – are a rarity. I wanted to know what motivated them to convert, and why they’d chosen this remote part of Andalucía to live.

Bahia, originally named Maria Jose Villa Cascos, explained that she was born in Seville, about 320km west of Órgiva, later studying law and working in Madrid as a lawyer.

“My search for the right way of life actually started in the Catholic college I attended in Seville,” she said. “It took me years of studying, probing, doubting and experimenting until I finally came upon the philosophy and teachings of Sufism. Sufism’s way of life, teachings of tolerance, wide understanding, unconditional love of mankind and total rejection of violence made me convert. We concentrate on the simplicity of life, valuing the spiritual over the material. That’s also one of the reasons why I turned from being an attorney to teaching kids.” 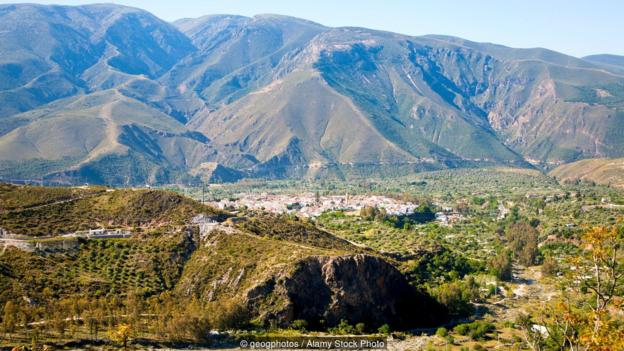 She explained that Umar, who was appointed emir of the order in the 1970s, happened to live in Órgiva before he converted. Over the years, other converts flocked here, like Bahia who jumped at the chance to run the school when the opportunity arose.

But the Sufis of Órgiva aren’t dreaming navel-gazers. They use mobile phones, internet and Instagram. They run businesses, like Bahia with her Montessori school and her husband who has an electrical appliances shop. Others farm and sell produce. But all their lives are dominated by their faith.

The only thing that marks them as different is their distinctive dress: the men wear baggy trousers and loose shirts, and the women don headscarves, long sleeves and ankle-length skirts.

I wondered, with an underlying fear of terror attacks in Spain and some people starting to associate Islam with jihadists and radicalisation, how people reacted to them.

“Here in Órgiva, nobody looks twice because we are a rather big community. In other places, people might stare at the way I’m dressed and maybe think me alien, but… ” she shrugged. 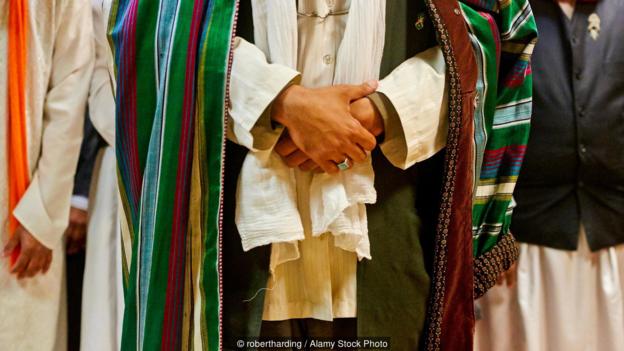 Rather than being concerned by stares and whispered comments, Bahia focuses on preaching tolerance, love and understanding.

“In view of the troubled times we live in, people have a very one-sided view of Islam. Bombs and terror attacks make headlines; good deeds don’t. This imbalance needs to be addressed and people have to understand that Islam and Sufism in particular mean peace and total devotion to Allah, who is the boat which helps us cross the ocean of life,” she said.

To find out more, I headed to Tearoom and Restaurant Baraka, owned by another Sufi, Pedro Barrio, now called Qasim. Originally from a Catholic family in Bilbao where he ran the family restaurant, he was also searching  for spiritual direction from a young age. 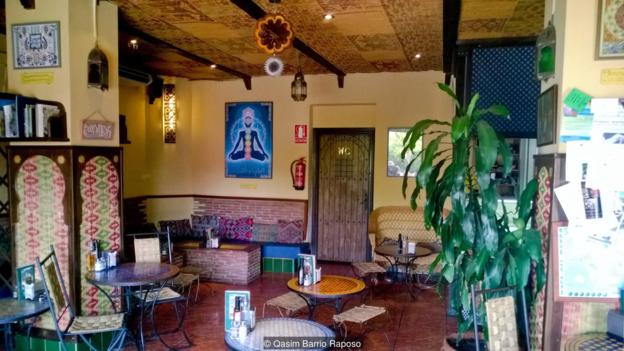 Baraka serves as a gathering place for both tourists and locals of various ideologies and religions (Credit: Qasim Barrio Raposo)

“I experimented with many things,” he said. “For a time, I even practiced Buddhism, then got interested in Shamanism, psychotherapy and vivation, which is a respiration technique.

Through a friend, I became familiar with Sufism. When I discovered the teachings and found that Jesus is a prophet in Islam, I felt like I had come home. Everything was familiar to me and I knew that this is the faith I wanted to follow, so I decided to convert. It gives me peace and purpose in life.”

“How did your family react to that?” I asked.

“Not so good. My mother was more understanding, but my father was angry. There was also the problem with our restaurant. I prayed at the mosque, then I had to go to the restaurant, serve customers alcohol and cut ham. I couldn’t go on like that,” he said. “Fate came to the rescue. A fellow Sufi in Órgiva wanted to set up a small Islamic restaurant but didn’t have the money. He contacted me, and as I had the funds, I became first a silent partner and now the sole owner.”

Baraka, frequented by his fellow Sufis, New Age folk, tourists and locals alike, doesn’t serve alcohol or pork, but isn’t entirely vegetarian either. Everything is home cooked and organic. I ordered a delicious Moroccan-style chicken tagine followed by a rich date-and-cinnamon cake with whipped cream. 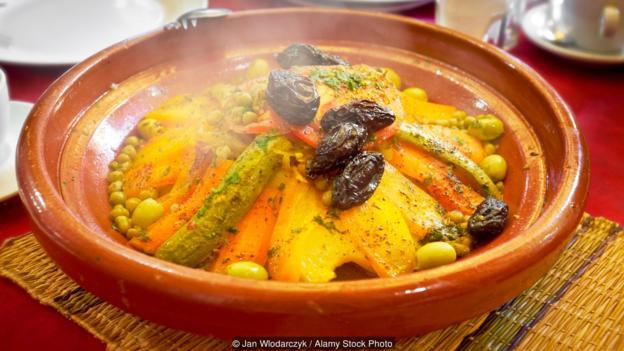 Sitting on the terrace at Baraka was a lesson in how different nationalities, ideologies and religions can interact peacefully. Dreadlocks and headscarves – even the occasional orange robe of a Buddhist monk – were evident. I heard English, French, German, Arabic and the occasional Spanish too.

“Do you speak Arabic?” I asked. “No,” Qasim smiled. “We say our prayers in Arabic but that’s the extent of my knowledge of the language.”

Despite being extremely busy, Qasim took me to their dargah (temple), where on Thursday nights the community celebrates dhikr, the praise of Allah, and hadra, a meditation. On the holy day of Friday there are more prayers and a communal meal.

The dargah was a simple affair, hidden away among olive and orange groves some 2km outside of town. There was a small prayer room, a kitchen, and three spartan guest rooms reserved for visiting fellow Sufis. Kids ran around while women prepared a meal and tended to a group of visitors. 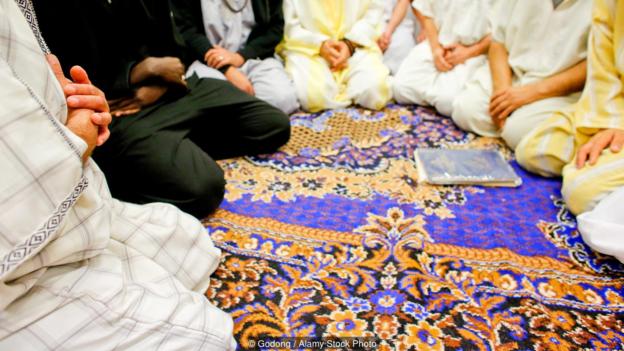 “These are people from Morocco and other Muslim countries who embark on what’s called Halal Tourism, visiting Muslim communities in other countries. It’s becoming quite popular,” Qasim explained.

He agreed with Bahia about the need to spread the message of peace, love and understanding to the non-Muslim world.

“Apart from living what we believe in, we welcome visitors like yourself who can tell the world about us,” he said. Before wishing me a safe journey home, he added, “Maybe one day we can all live in peace, inshallah.