“The construction site is a special place, both visually and with its atmosphere. It’s the very first form of the home we all live in. And when that home is under construction, it’s the habitat of the construction workers... Once these luxurious housings are finished, the site that the workers have worked for months becomes a place they can no longer set foot in.” 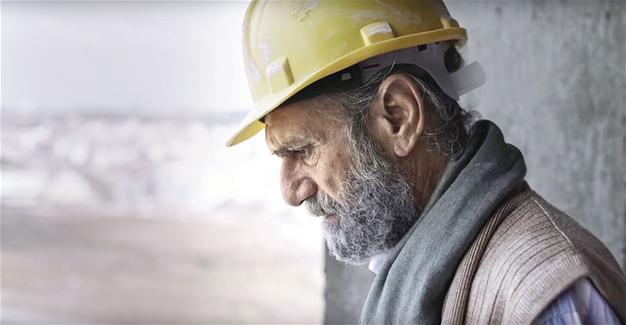 Through its heart-breaking story and beautiful cinematography, the multiple-award winner and debut feature of Kıvanç Sezer, “Babamın Kanatları” (My Father’s Wings), lays bare the conditions of the so-called “new Turkey,” as the leading Justice and Development Party (AKP) has dubbed its achievements over the past decade.

The luxurious high rises sprawling across big cities around Turkey are juxtaposed against the poor conditions of the construction workers who build them in Sezer’s film. At the center of the story is İbrahim, played by veteran actor Menderes Samancılar, who won two awards at the Antalya and Adana film festivals for his role in the film.

İbrahim is a seasoned construction worker who has left his family in the eastern city of Van to work in Istanbul in the hopes of buying a house to secure the future of his family. We soon learn that İbrahim and his family lost their house in the 2011 Van earthquake that claimed the lives of more than 600 people and rendered thousands more homeless.

İbrahim’s might be a sad story, but he is dealt even worse blows when he cannot get his well-deserved income on time and when he learns that he has to pay money he doesn’t have to become eligible to receive his retirement pension. He has more to come when he is diagnosed with an aggressive and untreatable form of lung cancer.

An everyday reality in Turkey are the work accidents that are mostly due to negligence and a lack of precautions. In “Babamın Kanatları,” such an accident leads to the death of a university student. İbrahim and the fellow construction workers witness the exchange of “blood money,” an illegal compensation from the construction owners to the family of the deceased in an exchange for their refusal to pursue legal action.

İbrahim begins toying with idea of suicide, seeing that the subsequent blood money will be the only solution to bring some prosper to his family. Jörg Gruber and Sezer’s cinematography and Rabia Kip’s art direction augment İbrahim’s desperation to haunting effect. The attention to details transform the construction site into an even much darker place.

From construction site to home

Sezer was in Ankara recently as a guest of the Festival on Wheels, joining the audience following the screening of “Babamın Kanatları.” He said the inspiration for his film came after a third-page news story about the death of a university student, working in a construction to pay for his tuition, in an accident.

Three people die every day in work accidents in Turkey, the highest figure in Europe and the third highest in the world, he said.

Sezer said the original title of the film was “Blood Money,” a reference to the money given to the family of the young man who died in the construction site. Later, he imagined the daughter of a worker drawing a picture of her father, and adding wings to the figure, hence “My Father’s Wings.”

Sezer noted that once these luxurious housings are finished, the site that the workers have worked for months becomes a place they can no longer set foot in. He believes that making such a film brings with it responsibilities and that he had to be sensitive in depicting the working class.

Many will compare Sezer’s cinema to that of Yılmaz Güney, the acclaimed late filmmaker who won the Palme d’Or in 1982 Cannes Film Festival with his “Yol” (The Road), as well as English director Ken Loach. Both filmmakers take on the problems of the working class, both display socialist ideals and both depict stories of the underdog. Sezer might very well be third on this list.