PANJWAI, Afghanistan — At first glance, it is not much of a library: two shelves of about 1,600 books and magazines in a basement room deep into a dusty alley of adobe homes in rural Panjwai District, in southern Afghanistan. The mattresses and blankets stacked in the corner still give the vibe of the guest quarters the room once was.

But the register shows how parts of the community here, particularly younger residents, have come to value any chance to indulge their curiosity, in a place that was at the heart of the original Taliban uprising in the 1990s and became a watchword for the tragedy and deprivation brought by war.

Hassanullah, 18, checked out “General History.” Muhammad Rahim, 27, came for “The Fires of Hell,” which he returned the next day; it was soon borrowed by a 12-year-old named Nabi. Taher Agha, 15, preferred “Of Love and the Beloved,” keeping it for 10 days. Another young man, about to marry, called ahead to make sure there was a copy of “Homemaking.” He rode his bicycle six miles to pick it up.

The library here in Panjwai is largely the work of Matiullah Wesa, a 22-year-old student from Kandahar who is in India finishing a degree in political science. For about eight years, the Pen Path, the volunteer organization that Mr. Wesa started as a teenager, has been working to reopen schools closed because of violence and to bring books to some of the worst-affected conflict areas.

After opening in January, the Panjwai library had about 24 visitors in its first month, said Muhammad Nasim Haidary, who looks after the library and whose family houses it.

But the interest of a couple of female readers, who approached women in the Haidary family about their interest in the books, has caused a small dilemma in a society that frowns upon even sharing the names of women in public: How can the library keep track of who took the books out if it cannot write the women’s names?

One proposal was to use pseudonyms for the women instead of writing their real names in the register, but that would create another problem: How would poor Mr. Haidary remember which pseudonym belongs to whom

The fighting over the past 14 years has disproportionately affected the southern and eastern parts of Afghanistan, and Kandahar Province, which includes Panjwai, has been among the hardest hit. As district after district changed hands back and forth between the Taliban and the Afghan government and its American allies, survival became the priority. Education, which had always been scarce here, fell to the bottom of the list, and in many places schools have remained closed even after the insurgents were pushed out. 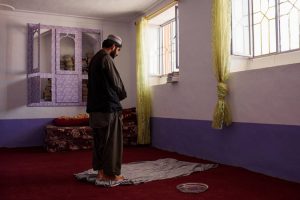 Mr. Wesa prayed in the community library he founded in Panjwai District, in Kandahar Province, until recently among the most dangerous parts of southern Afghanistan.

Pervasive corruption has also had an effect, with many of the schools that are listed on government budgets not actually functioning at all — “ghost schools” set up to allow officials to gobble up development aid without delivering any services.

“The problem is that so much of the effort has focused on the cities,” Mr. Wesa said during a visit to Panjwai last month. “We have to start from the village. If this library was in the city, we would have 100 visitors a day. But to me, the five visitors in the village are more important than the 100 in the city.”

Mr. Wesa’s organization began a national book drive last year, collecting about 20,000 books in a campaign that focused on social media. The competition for social status runs deep in this country, and Mr. Wesa banked on that to encourage contributions. Even the smallest donation of just a couple of books was celebrated online, with a picture of the donor and a word of gratitude.

The books have helped establish seven modest libraries in provinces with a reputation for some of the worst violence of the war: Helmand, Kandahar, Khost, Kunar and Wardak.

To Westerners, Panjwai, about an hour’s drive from the city of Kandahar, is most closely associated with a gruesome atrocity: the massacre of 16 civilians by an American Army sergeant who walked off his base before dawn one morning in March 2012. But for the residents, the place turned to hell years before that.

“Panjwai was like a bakery oven: You burned if you entered,” Mr. Haidary said. “If you said you were from Panjwai, people would get scared of you.”

Recently, though, the district has been relatively quiet. Even as the Taliban exert pressure in neighboring provinces, gobbling territory, the reach of government has been maintained in Kandahar, though it has often beendisappointing or abusive.

“A few years ago, I don’t think I would have agreed to house a library here,” said Hazrat-Wali Haidary, the eldest son of the family hosting the library, who is training to be a doctor. “Everyone was suspicious of everything, and I wouldn’t have wanted to welcome trouble. But now, relative to other places, it is peaceful here over the past three years, and there is an atmosphere for the people to turn to education and books.”

Mr. Wesa’s journey into education activism began in his home district, Maruf, which is now contested by the Taliban. His father opened one of the first schools there, before violence forced their family to relocate to Spinbaldak, a border commercial hub.

But the seed had already been planted. Mr. Wesa, one of 11 children, continued accumulating books for a family library they brought with them when they moved.

“Every time he got his hands on money, we would see him returning with more books,” said his older brother, Wali Muhammad, an army officer.

The family library in Spinbaldak, which is now open to the public as part of Mr. Wesa’s volunteer organization, has nearly 4,000 books organized on neat metal shelves. In the middle of the carpeted room is a gas heater for winter reading and an ashtray and a spittoon for those who may need a smoke or a pinch of smokeless tobacco.

The circulation at the Spinbaldak library runs largely on an honor system. Bookkeeping is minimal, partly because another brother of Mr. Wesa’s, who is the library’s caretaker, Atta Muhammad, has only very basic literacy.

“If it is a person I know well, I just write down the number of books he took, not the details of all the books,” Atta Muhammad said.

When the books are not returned on time, Mr. Muhammad finds himself making phone calls or visiting the borrowers’ homes. Despite his efforts, several dozen books have been lost, most of them never returned after being checked out.

Mr. Wesa plans to open several other small libraries in the coming year and to expand the book drive to a more organized network of volunteers across the country. How far he is willing to go to promote reading was best displayed in a recent conversation he had with a wealthy businessman in eastern Afghanistan. The man made an offer: He would donate 20,000 books to a library in his part of the country, on the condition that it be named for his father.

In his excitement, Mr. Wesa cared little about cultural taboos and what is socially acceptable in giving his answer: “I told him I would even name it after his mother — whatever it takes to get the books.”

This article was originally published on NY Times Website
http://www.nytimes.com/2016/03/31/world/asia/afghanistan-panjwai-library.html?_r=0