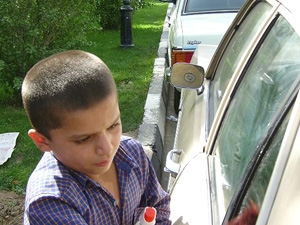 Every day, seven days a week, Hamid stands in the middle of four lanes of unrelenting, heaving Tehran traffic, waiting for the lights to go red. He then weaves his way through the fumes and noise, tapping on the sides of cars. If he is lucky, a driver will lean out of his window and pluck from his hand a small sheet of paper - a poem written by the great Persian poet Hafez - in return for the equivalent of 15 US cents.

The lights will go green and Hamid will then have to carefully negotiate his way back to his spot, dodging the roar and rush of cars around him. If he is lucky, he won't get hit. Dwarfed by the cars, a thick smog of fumes fills his tiny lungs as he waits for the next red light. Hamid is five years old.

Official government figures estimate that there are about 20,000 street children in the country, but NGOs say there are at least 35,000 in the capital Tehran alone. According to an article published in an Iranian daily four years ago, 100 to 150 street kids die each month from malnutrition and dangerous working conditions.

Iran has not ratified international conventions defining a minimum age for work, but it has set its own rules to prevent child labour. A child in Iran cannot legally work under the age of 15. However, there is a loophole that is open to exploitation.

"There is one major problem to this law: domestic work is excluded, which means many children are employed at home or in domestic workshops without any legal prosecutions," Mahsa Kayyal, head of the child rights committee of the human rights group ODVV, told IRIN.

A number of NGOs are working on a draft law to lobby government. Among their proposals is the introduction of a law to prevent human trafficking and a law stipulating heavy penalties for those forcing children to beg and deal in drugs, as they have discovered that some street children are victims of organised criminal networks. "There also needs to be a clear definition of sexual abuse which at present mainly covers intercourse and doesn't cover other sexual abuses," Kayyam said.

In 2002, the United Nations Children's Fund (UNICEF), with the Interior Ministry's Bureau of Social Affairs, helped to set up a committee to address the problem of street children with the aim of expanding the number of NGOs working with them. But UNICEF was not happy with the results, saying that few NGOs had the capacity or the experience to work in the field.

UNICEF conducted an evaluation of services for street children three years ago. The research was carried out in eight provinces with government bodies, local councils and NGOs participating. The findings showed that sufficient attention was not paid to the dangers children face when they return home, that contact between families and assistance agencies is weak and that little is done to help families cope with their problems.

Most of the street children live in the slums of south Tehran and are sent out to work every morning by their parents. They travel to the affluent suburbs of north Tehran where they shine shoes, clean car windscreens (if they can reach) and sell an assortment of junk and oddities: chewing gum, flowers, fortune poems, nylon socks and cheap shoes.

South Tehran is where most Iranians in the city live, squeezed into decaying houses in narrow, twisting alleys. The hub of the 1979 Islamic Revolution, south Tehran is a densely populated urban sprawl, spilling further and further south in a sea of bazaars and black chadors. This is the district of the poor, working class and religious, where people still flock to Friday prayers. By the time it reaches the south of the city, the sparkling spring water that gushes from the mountains in north Tehran has become murky and viscous, clotted with rubbish.

On a road where turquoise domed mosques are squeezed between half-crumbling buildings and derelict houses, a small shabby building hides behind a high brick wall. From behind big iron gates come the delighted shrieks of children playing. This is one of the only places in Tehran dedicated to looking after street children and giving them an education. Darvazeh-Ghar is
a school set up by the Society for Protecting the Rights of the Child, a non-governmental organisation set up by the Iranian Nobel laureate and human rights lawyer, Shireen Ebadi.

The school has about 200 children, aged from about five to 17, most of whom are not permanent attendees. Five days a week they are free to come here and feel what it is really like to be a child, although most children only have one day off a week. There are three main groups of street children here - Iranians, Afghans and gypsies, an ethnic minority who have migrated from India, Pakistan and Bangladesh.

"For most of the children here, attendance is seasonal," Ali Akbar Esmaielpoor, a volunteer teacher at the school, told IRIN. "For instance, our gypsy children rarely attend in the summer as they go back north and help their families on farms, doing things like working in the rice fields." There are about 80 volunteers at the school, doing everything from teaching to cooking - there are even professional counsellors on site to work with the children.

"Many of their parents are drugs addicts and need their children to earn money to pay for their habits. They can often get violent. There is also a lot of abuse," Esmaielpoor said.

Hamid's parents allow him to spend a day at the school every month - going to school is his day off. "I like it here, it's better than being on the road all day," he says, smiling as his friends tug at his ragged t-shirt. "I don't really like standing on the street. It's really boring and in the sun it gets so hot," he scratches his little pot-belly, distended by malnutrition. Hamid is originally from Afghanistan but was born in Iran. About 70 per cent of the children here are Afghans.

The office of the United Nations High Commissioner for Refugees (UNHCR) estimates that there are about a million Afghan refugees in Iran. Most of their children do not go to school but work instead. "In theory, Afghans are not allowed to work in Iran - at whatever age. Of course, it is happening, but it really leaves us with very little room for manoeuvre as far as negotiating with government is concerned," Marie-Helene Verney, UNHCR public information officer, told IRIN.

Many of the children at Darvazeh-Ghar are not refugees, but, like Hamid, are illegal immigrants, whose parents were economic migrants and work here illegally, mostly as badly paid construction workers. Their children, as illegal citizens, do not have the right to an education and many are sent out to work at an early age to help supplement the family's paltry income.

For these children - refugees and illegal immigrants alike - there is little that international organisations like the United Nations can do. "As far as refugee children are concerned, it is the responsibility of the host country to ensure that refugee children have access to education in the same way as all children in the country," Verney told IRIN.

"Iran's record over the past 20 years has been very good, but it is more and more the case that parents are asked to pay for their children's education. UNHCR has met some of these costs, but this will stop as of June 2004. UNHCR's budget in Iran is being cut, and the focus of the programme is on voluntary repatriation, which explains the cuts. Some Afghan refugees also prefer to send their children to Afghan schools, although these are tolerated rather than legal in Iran," she added.