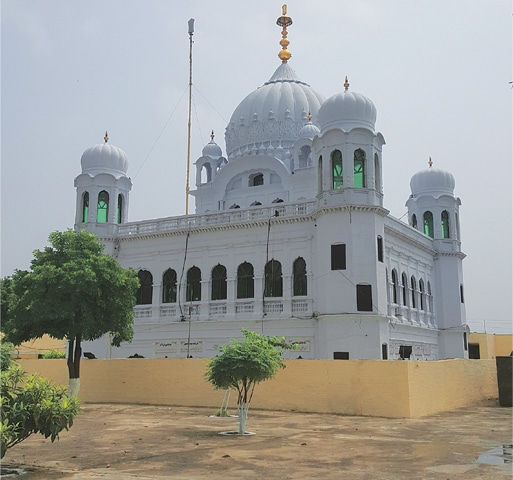 A glorious white structure stands tall in the middle of lush green rice fields 2.5 kilometres off Shakargarh Road in Kartarpur. The uneven path leading to it passes through fields on both sides, schoolchildren hopping back home, farmers herding cattle. There are no signs of settlements except those of a few gypsy families.

That magnificent structure is Gurdwara Darbar Sahib in Sha­kargarh tehsil of Naro­wal district, around 120km from Lahore. It is just 4km from the Indian border with Dera Baba Nanak on the other side.

But this isn’t the first time opening the corridor for Sikh pilgrims has been in the news. On the Pakistani side, various proposals have been discussed and announcements made since the Musharraf era, but lack of interest by the Indian side has kept the proposals confined to cold storage.

Several Indian lawmakers have taken up the issue with their governments since the late 1990s. Last year, an Indian parliamentary standing committee, headed by Shashi Tharoor, ruled out the construction of a corridor citing security concerns. Last month, India’s Punjab Assembly adopted a resolution asking the central government to take up with Pakistan the opening of the corridor.

As one enters the gurdwara, on the right side is a small courtyard where lies Guru Nanak’s shrine. On the left side is a courtyard for distributing langar and living quarters. Inside the carpeted hallway is a small samadhi. Upstairs is the main prayer hall where the Guru Granth Sahib is placed, but I was told the hall was ‘closed’ at that time. I was offered the langar that consisted of rice with a channe ki daal.

“Hindus, Sikhs, Muslims, everyone considered Guru Nanak their saint, so when he died on Sept 22, 1539 here, Muslims and Guru Nanak Naam Lewa Sangat got into a feud over who would get his remains. When the sheet covering Guru Nanak’s body was lifted, his body wasn’t there, but only fresh flowers. Both sides divided the sheet and flowers between themselves and Muslims made a shrine for him and Sikhs made a samadhi,” explained Gobind Singh, caretaker of the gurdwara. Gobind has been appointed here by the Evacuee Trust Property Board (ETPB) and belongs to Nankana Sahib.