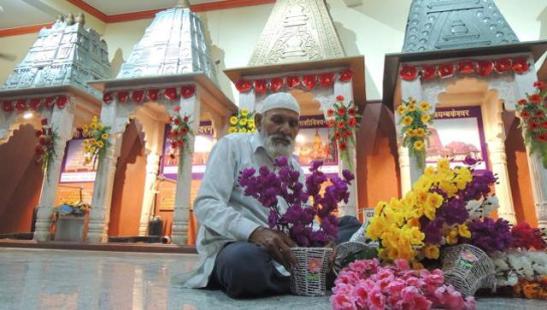 A temple dedicated to Lord Shiva in Mirzapur village of Uttar Pradesh’s Aligarh district is not an impressive one and does not follow any unique style of architecture.

What sets it apart is the fact that it was constructed by a Muslim — standing as an epitome of communal harmony in the state where the clamour for the construction of the Ram Mandir in Ayodhya at the disputed site where the Babri Masjid once stood is growing.

A Hindu mob demolished the 16th century Babri Masjid on December 2, 1992, demanding the construction of a temple for Lord Ram, who Hindus believe was born at the site in Ayodhya. The demolition of the mosque sparked some of the deadliest riots in India in which thousands were killed.

The temple in Muslim-dominated Mirzapur, around 12 kilometres from the district headquarters, also stands out because its main priest is also a Muslim.

Constructed in July 2013, it is perhaps the only temple in the state where right from its construction to its upkeep is entirely managed by Muslims.

Babu Khan, the husband of village pradhan Shama Parvin, constructed the temple near the CDF police post with the help of other community members. OP Rana, the then in charge of the police post, also played a vital role in building the temple.

Babu Khan’s role is not limited to its construction as he looks after the cleaning and upkeep of the temple and also spends almost 10 hours on the premises every day.

“The temple was constructed to keep alive the Hindu-Muslim unity and communal harmony,” Babu Khan insists.

“In our village, both Hindus and Muslims live like brothers. Since we keep helping each other, we thought that constructing a temple for our Hindu brothers would bind us further. Villagers like Aas Mohammad, Abdul Salam and Sher Mohammad have contributed much in its construction,” Babu, who despite being a devout Muslim offers water to the Shivling, adds.

“My family, including my wife Shama Parvin, five sons and three daughters, daily help in cleaning the temple and maintaining it,” he says.

Abrar Khan, the main priest of the temple, besides performing his duties at the temple also offers his namaaz daily.

“Like the famous Hindi poet Raskhan had faith and belief in Lord Krishna, I have faith in Lord Shiva,” Abrar says.