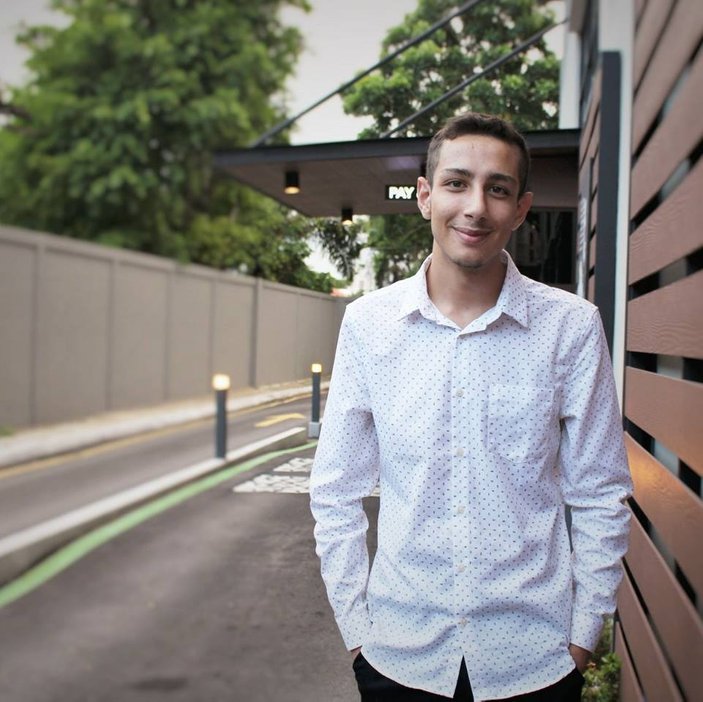 Muhammad Hasan (Hasan Al Akraa as he goes by) was 12 years old, when he and his family fled from their war-ravaged hometown of Aleppo in Syria, to seek safety in Malaysia.

It was 2012 and the war, which would escalate into one of the world’s bloodiest, was in its second year.

They knew they had to act fast.

But first, they had to go to Damascus.

“It was a dangerous journey from Aleppo to Damascus,” Hasan recalled.

During the bus journey, they saw the wreckage in the streets.

In Damascus, they saw more carnage. The imam of the mosque yelled through a loudspeaker: “Go hide! Go hide! The rebels are coming!”

They hid inside the kitchen of their rented house, switched off the lights and stayed silent.

“They were knocking very hard, and came with big knives, calling out jihad! Jihad!” Hassan said.

Thankfully, the rebels went away. Soon after, with the help of a family friend, they made their way to the airport. They went through many check points.

Thousands of people were running. Fire was burning at the roadside.

In Kuala Lumpur, they stayed with a Malaysian couple.

Previously, back in Syria, Hasan’s family had offered this couple- whose wife was studying there - to stay at their house when they fell on hard times.  The couple returned the gesture, and Hasan’s family stayed with for two weeks before they found their own place at the outskirts of Kuala Lumpur.

At first, Hasan and his siblings were denied to attend a government school because Malaysia does not recognize refugees and deem them as “illegals”. However, after much persuasion, they were admitted under the condition that they could only attend classes but not take exams.

But Hasan and his siblings were bullied by their classmates.

“The Malay kids would make fun of us because we didn’t know the Malay language and the culture,” he explained.

They studied only for two weeks at the school.

Meanwhile, his dad began working at the International Islamic University of Malaysia (IIUM), but when he fell sick, Hasan and his older brother stepped in to become the family’s breadwinners.

“We children never worked before in our lives,” Hasan said, adding that his family used to have a comfortable middle-class existence. In Syria, they had a house with 5 bedrooms.

“Back in Syria, we had everything – home, friends and family. We had animals, too. And there were seasons such as winter and spring. We had a happy life.”

Hasan would work from 10 am to 10 pm washing dishes, wiping tables and cleaning the toilets.

He took the challenges in stride.

“I told myself I was learning, so it was okay”.  I saw mistakes as lessons. For example, I didn’t know you weren’t supposed to wash dishes with Clorox bleach!” Hasan recounted with a laugh.

“Everything was part of a learning process,” he said.

Hasan ultimately figured out how to wash thousands of dishes a day by watching YouTube videos.

His boss promoted him to chef assistant, and Hasan faced another challenge: How to cut vegetables. Again, he took it in stride and helped to prepare Malay, Syrian and Albanian food.

His boss was further impressed and suggested Hasan to cook. Later, in 2014, Hasan became the restaurant’s cashier and assistant manager.

And then, one day, the Malaysian immigration department swooped down at the restaurants and cafes at the university.

“They demanded for my passport, but it was at home and I only had my UNHCR refugee card with me.”

The immigration hauled him and other illegal workers into a truck.

Hasan was locked up at the Bukit Jalil prison with 20 other people.

“We slept on the ground served bad food - food that couldn’t even be fed to animals.”

“I couldn’t eat and sleep for the first few days.”

After 9 days, Hasan was released.

The experience traumatized him so much that he vowed to not work again.

Through his three years in Malaysia, he had learnt and impressively mastered the Malay language as well as English (prior to coming to Malaysia, he only knew Arabic).

At 15, he started volunteering at refugee schools, teaching English, Malay and arts and craft.

Hasan is a firm believer of the importance of education. He recently graduated from a private high school where he studied for his O Level (in Malaysia, refugees are allowed to attend private schools).

He also started to learn about voluntarism, and in 2016, volunteered at various parts of the city.

In 2017, he launched the Al-Hasan Volunteer Network, a platform which provides volunteering opportunities through social and charity projects, and which helps to better serve refugees and underprivileged communities.

He has been invited to speak at various events.

Hasan has just started foundation studies in the field of education at Nottingham University Malaysia where he received a full scholarship (he is one among four other refugees picked among hundreds).

His ambition is to become an educator and journalist, and he wants to continue volunteering.

Asked about his hopes for Syria, he said: “I don’t know if there is a future for my country,” he said, sadly.

He hopes Syrians driven out of the country will come back one day when the war is over and foster peace and facilitate rebuilding efforts.

“We do what we can do. We can’t save the world. Our first step should be spread kindness, love and truth”.

Find out about Al-Hasan Volunteer Network and how you can help here.