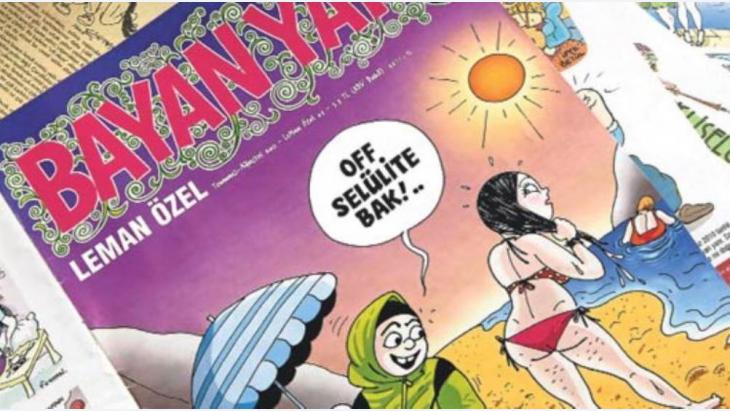 Bayan Yani is a satirical magazine led by women in a country which is becoming increasingly hostile to them. For more than six years, cartoonists and writers in Turkey have combined their talents to make readers not only think, but also laugh in a feminist way. By Clement Girardot

Unlike other sleepy suburbs of Istanbul, Avcilar is a dynamic place thanks to one of the Istanbul University campuses being located there, not to mention its long pedestrianised boulevard lined with plenty of cafes, shops and restaurants.

Avcilar is also home to Ezgi Aksoy and Feyhan Guver, both taking part in and spearheading a unique media endeavour: Bayan Yani, a satirical magazine that only publishes women cartoonists.

″It all began in March 2011 as a one-off issue,″ recalls Aksoy. ″We gathered writers and cartoonists already working for the more general satirical magazine Le Man (then one of Turkey′s three top satirical magazines, along with Penguen and Uykusuz). We wanted to print a special magazine for International Women′s Day, because at the time women′s rights were starting to come under fire in Turkey. We made the first issue and decided to continue after receiving feedback encouraging us to do so.″

Women – side by side

It has now been six years since the launch and Bayan Yani has been publishing a new issue each month. Every one deals not only with the country′s endless political turmoil, but also with problems of daily life, including the increase of things like hate speech against women, domestic violence and the murder of women. For the magazine′s contributors, it is hard to disconnect the two. 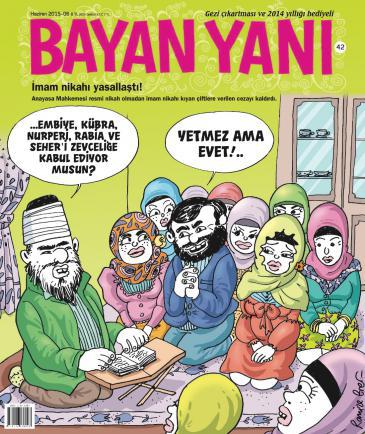 Bayan Yani is mainly run by women. Core contributors to the publication are a group of six or seven female cartoonists who come from all over Turkey and abroad. Their work not only addresses the country′s endless political turmoil, but also with problems of daily life, including the increase of things like hate speech against women, domestic violence and the murder of women

Aksoy is a freelance writer, specialising in cinema and Latin America. In the March issue, she wrote a portrait of Berta Caceres, an environment activist from Honduras who was killed last year. Guver is a cartoonist and a long-time contributor to Le Man. She likes to draw stories about relationships and friendship, typically set in the small village in the region of Thrace, where she is from.

The magazine is called Bayan Yani, which could translate as ″Women side by side″, poking fun at a form of sexual segregation peculiar to Turkey, says Aksoy. ″If you are not relatives or friends, inter-city bus companies forbid women and men from sitting next to each other.″

She explains that when the team started their project, there was a news article about a woman who wanted to buy the last remaining seat which would have seated her next to a man. ″The company did not sell her the ticket. This rule is quite funny because it does not apply to other forms of transport such as planes or local buses.″

While Bayan Yani is primarily a women′s stronghold, its editorial board also has one man publishing regularly on its pages: satirical writer Attila Atalay. ″He writes about a female character, but he writes so well that no one would think it is the work of a man,″ says Aksoy. The magazine is the work of a fluctuating collective of contributors. ″We are free to publish what we want, there is no boss. We just exchange emails with our ideas,″ says Feyhan.

Bayan Yani has a core group of six or seven regular contributors, all located in different parts of Turkey and even abroad, such as cartoonist Ramize Erer who lives In Paris. 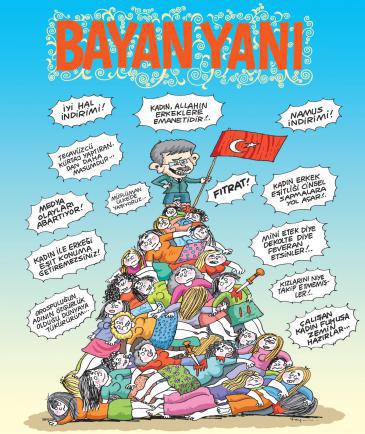 Confronting patriachalism and heteronomy with provocation: Bayan Yani is merciless in its satire of politicians, whether Turkish or foreign. Many cartoons for instance focus on the misogyny of the ruling AKP and President Erdogan. Although Bayan Yani contributors subscribe to widely differing world views: some are more liberal, others are Kemalist or supportive of the Kurdish movement – all are fighting the current authoritarian regime

One of the most recent issues featured a four-page long comics story where Erer describes how her most iconic characters came to life. There is Nadide, a seemingly happy wife who represents what Erer calls the ″modern″ or ″enlightened″ face of Turkey.

There is also Ezik, her more traditional counterpart, who is ill-treated by her husband; and Berna, an assertive and independent character, always breaking social taboos and conventions, who in the comics go by her Turkish nickname kotu kiz, which means ″bad girl″.

Berna is blond and curvaceous; other characters in the magazine are tall, thin, young or old, coming from both urban and rural backgrounds; they are veiled or unveiled, fashionable or hopelessly untrendy. Unlike in other women′s magazines, those in Bayan Yani have very diverse bodies and personalities. ″Women tell us they feel more comfortable with our magazine because of this reason,″ says Guver. ″For example, our cartoonist Ipek is very tall and she addresses the difficulties of being tall in her work.″

Each story and character may deal with both lighter or heavier topics, explicitly covering more or less all issues affecting women: discrimination, machismo, social pressure, rights and struggles.

The first few pages of every issue feature cartoons that address the latest news and scandals related to gender. The violence perpetrated on women, which is otherwise normalised, becomes absurd and unacceptable under the pen of Bayan Yani caricaturists. Both world leaders or national politicians are usually not depicted in a positive light; countless illustrations, for example, highlight and address Erdogan′s misogyny.

Aksoy is at pains to point out that Bayan Yani writers have different world views: some are more liberal, others are Kemalist or supportive of the Kurdish movement – yet all are fighting the current Erdogan regime.

Whether they are hard or soft, most opposition voices are having a hard time under Erdogan′s iron rule. In recent months and especially following the failed coup attempt of 15 July last year, repression has increased.

Dozens of media houses have since been closed. Turkey currently holds the world record of being the country with the most journalists in jail, having around 150 media workers behind bars. Musa Kart, a caricaturist from the newspaper Cumhuriyet, one of Erdogan′s most disliked publications, is incarcerated under harsh conditions in Silivri, a huge prison built on the western edges of Istanbul; in fact, it is not far from Avcilar, where Aksoy lives.

″Going to jail is quite a realistic prospect for all of us,″ she admits. While the Bayan Yani team has not yet faced any lawsuit or pressure from the state, the case was different for Le Man. ″After 15 July, a group of people came to the publisher′s office at night and brought a jerry can of oil, threatening to set fire to the building.