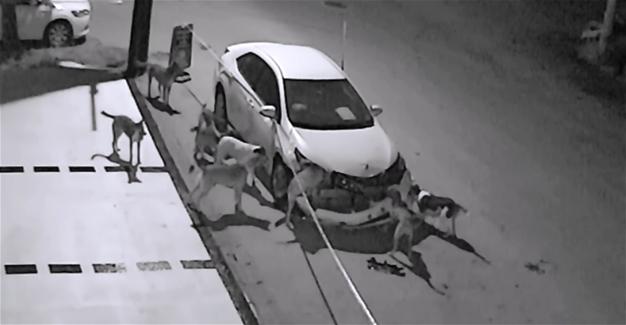 Cem Acar, who works as a mechanic in Sakarya, was shocked to find by the damage to the bumper of his car, calling the police after initially thinking the incident was an attempted theft.

However, surveillance camera footage later revealed that the damage was a result of attack by stray dogs in the industrial estate where the car was parked.Acar said the total cost of repairs was almost 5,000 Turkish Liras.

“I went home with another car after parking my car in front of my shop. I was shocked to see the damage when I returned in the morning. We thought the incident was a theft attempt and called the police. Later we watched the surveillance camera footage with the police and we saw eight stray dogs tearing the car’s bumper into pieces,” he added.

Acar suggested that the attack could have been prompted by the dogs pursuing a cat hiding under the car.

“But we cannot see any cat in the footage” he said, while adding that he would not be lodging any official complaint about the dogs.