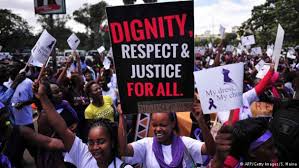 According to Star News, Gender-Based Violence (GBV) in Kenya is reported to be at least 357 as of January 5th 2018. However, for the past three months (September to November), one case particular case of violence has hit all media houses. A string of dramatic narration of events come with it: One victim is Rongo University student Sharon Otieno who found herself in a complex situation as she was dating the County Governor of Migori County in south nyanza Kenya. She was also pregnant by him.

This is a very common example of Gender-Based Violence (GBV) in Kenya, but this particular one caught the public eye due to the rank of the perpetrator in the country: the Governor Okoth Obado who committed a murder most foul. The accused is out on bond of five million Kenya shillings and he is back into politics - this shows that he is confident of the judiciary which has a habit of protecting the high and the mighty in the government. Justice for the family members of the late Sharon Otieno remains elusive.

The Suspects to the murder are still in court but the woman and her fetus are no more - hence they are charged with two murder cases. The family of the deceased is seeking justice from the Judiciary in Kenya but what I fail to analyze is why do women fail to get signal of an abusive partner and stay away? Is it too late to walk out or why do we take very big risks for our spouses?

A woman always knows and notices when a man is harsh or violent. What I mean is that when a man shouts at her and keeps numb this will cause future danger to her or family and the man’s aggressive activities will gradually accelerate to higher danger of Gender-Based Violence (GBV) if not acted upon early warning. Usually women like to talk to friends here and there with the hope the man will change but danger lurks ahead.

In Sharon’s case, there must have been days when she and the governor argued as couples do but she didn’t anticipate her murder. Sharon must have noticed the man’s behavior of shouting one time but as usual they kept on giving herself hope that all is well.

The trust and love and comfort she had for the governor made her enter into the vehicle that easily took her to her scene of crime. The Journalist Barack Oduor narrowly escaped death by a whisker as he jumped off the moving vehicle. Little did Sharon know she was the next on the chopping board: she was mercilessly murdered and before that she was repeatedly raped with protection as their intention was to make the sperm/semen unavailable for criminal investigations. This shows their intent to kill.

Love and crime of passion

Women get blindfolded and wallow in fear and fear even telling a neighbor when she finds out her spouse is into illegal or suspicious activities. What makes them to be so naive to understand that the spouse they are living with are up to something mischievous? Do they get any financial aid from the proceeds? Do they fear letting the police know for fear of being caught or fear of getting rejected by her spouse. What more evidence do they need to see from the malicious spouse? Do they do it under coercion or under duress or do they do it voluntary?

This under the penal code chapter IV sec 7 that states as follows: ‘Ignorance of the Law does not afford any excuse for any act or omission which would otherwise constitute an offence unless knowledge of the law by the offender is expressly declared to be an element of the offence.’

Her Spouse was charged with murder contrary to section 203 Penal code CAP 24 Laws of Kenya to another woman Monica Wambui Karanja a third party who was found dead in her residential home with her throat slit. This silence and fear and blinded love might cause her to be an accomplice of an offence whereby being termed as joint offenders in prosecution of common purpose if the court finds her guilty that is contrary to section 21 of the penal code as she is also charged alongside her partner Jowie. Women are empowered economically and professionally but most of us are weak and vulnerable.

Her spouse Jowie, if found guilty of murder, will be charged under the offence punishable by death: penal code per section 204. Besides Section 203, the penal code of Kenya section that defines murder are as follows:

‘Any person who of malice aforethought causes death of another person by unlawful act or omission is guilty of crime of murder’.

How big is fear in love as it costs women a lot of misery ahead?  Are we in such desperation of being single till we sacrifice our image for being engaged with being involved with a criminal? Do we lack awareness that men can be toxic and dangerous or are just vulnerable and weak women simply victims of circumstantial evidence in the name of seeking to fit amongst their mates who are happily married?