Astana is not known internationally for its theatre life, but that reputation could change. One of the capital’s theatres is celebratinga three-digit anniversary, which shows its theatre life is not young and has every right to be amongitssignificant features.

Gorky State Academic Russian Drama Theatre, in the heart of the old part of the city on the right bank, is attracting viewers for the 115th season. One of the oldest theatres in Kazakhstan, it was established in the end of the 19th century.

“Over the past 115 years, the theatre has gone through a lot. Recent decades have seen the ups and wins of the creative troupe. Today, Gorky Theatre is one of the pillars of the cultural world in Kazakhstan. There are more than 20 current productions in the repertoire of the theatre. Famous directors with the creative team are doing a more attractive and competitive repertoire. This is proven by festivals and competitions, tours and most discussed performances. In the new theatre season, we offered you more new premieres and many viewers’ favourite plays of past seasons,” notes the theatre’s website.

The foundation of the theatre was laid in 1899 at the request of dramatic art lovers after the local government and merchant-philanthropist Kubrin allocated 100 roubles each for its construction.

Beginning as a small theatre, it quickly started to gain popularity and soon was known for its creative team, becoming one of the leaders throughout Kazakhstan. In 1957, “Puchina,” (Deeps) based on Alexander Ostrovsky’s play, was awarded the All-Union Teatralnaya Vesna (Theatre Spring) review. Two years later, the theatre was named for Russian writer and activist Maxim Gorky.

Performing at various times, the Soviet Union’s prominent actors and directors have shown their talent on the theatre’s stage. 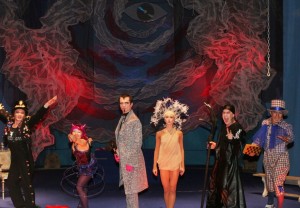 Performance of Master and Margarita

Today’s repertoire includes plays that are part of the treasury of world and national dramaturgy, such as “Zdes Vse Svoi” based on Nikolai Gogol’s “Revizor” (“The Government Inspector”), “Master and Margarita” by Mikhail Bulgakov, “A Streetcar Named Desire” by Tennessee Williams and “Hamlet” and “Romeo and Juliet” by William Shakespeare. Modern presentations have included works by Alimbek Orazbekov, Nadezhda Ptushkina, Nina Sadur, Ivan Viripayev and Anna Yablonskaya.

A tour of the website indicates the theatre offers the audience a variety of productions. Tickets are inexpensive; the highest price of 1,500 tenge (US$4.55) is only for premieres. Prices are often even lower and those who have an opportunity to visit and know even a smattering of Russian are encouraged not to miss the chance. 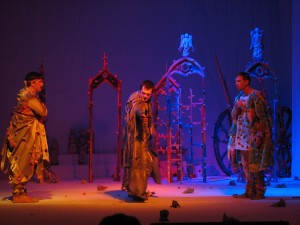 “Today, we are drawing and discovering new names, theatre forms repertoire and is trying to keep up with the times. But by not depending on the historical epoch, every play is about thinking about the present day, which makes our lives cleaner and brighter,” according to the crew.

Last year was very intense for the theatre, as the 115th anniversary season launched Sept. 25. One of the brightest premieres, “Tomiris – Saka Queen,” was dedicated to the 550th anniversary of the Kazakh Khanate.

Based on “Saki,” the famous novel by Bulat Dzhandarbekov, the play tells the story of the struggle between the Persians and the people of the Saka tribe under the leadership of Queen Tomiris. Her idea of unity and independence through many centuries was implemented by Kerei and Zhanibek, founders of the Kazakh Khanate, in 1465. 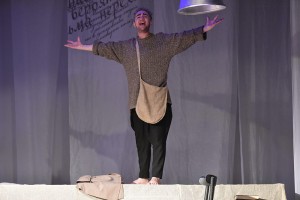 Performance of The Black Monk

“Audiences and critics praised the new production. The importance and relevance of the theme of patriotic education of young people was noted by Secretary of State of Kazakhstan Gulshara Abdykalikova, who also visited the premiere of the performance show,” said director and Honoured Worker of Kazakhstan Yerkin Kassenov.

He added another 2015 premiere was “The Black Monk,” based on the short story by Russian author Anton Chekhov. The play was written and directed by theatre’s leading actor Igor Sedin.

“We have not forgotten about our very young viewers. On New Year’s Eve the theatre premiered ‘Snow Queen,’ directed by our actress Lyudmila Kryuchkova,” added Kassenov.

March started with the debut of the famous Ken Ludwig play “Leading Ladies,” directed by Bekpulat Parmanov. The same month also saw the premiere of “Chaos” directed by Kenzhebai Dyussembayev.

The experimental play “Awakening” was presented May 15. “The trash-drama tells the story of three parallel destinies. Each character is unwittingly reliving his life and intertwines with the lives of the other characters of the play. Strange, cruel and an equally-ridiculous statement is a cocktail of different elements and directorial decisions,” according to the press release. 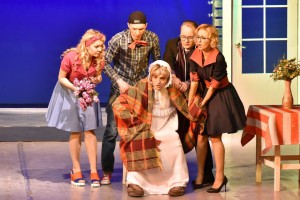 Performance of The Leading Ladies 2

Frequent visitor Gulzhan Kenesbai noted she cannot imagine her life without the theatre.

“I really like our theatre. We used to go to the theatre with my family when I was a little girl and it became part of me. Now sometimes I do not have time, because most of the plays start at 6 or 7 pm right after work and I cannot come on time, but on the weekends I try to go there. This year I really liked ‘Tomiris;’ it is amazing and patriotic. I am also a fan of ‘Master and Margarita.’ Well, I like Russian classics,” she said, adding it is worth seeing.

Like many other devotees, Kenesbai wishes the Gorky State Academic Russian Drama Theatre good luck and hopes it will have bright future.

“I’d rather go to the theatre than to the cinema. Here everything is real, the actors’ feelings and impressions, and for me it is a real talent,” said Kenesbai.