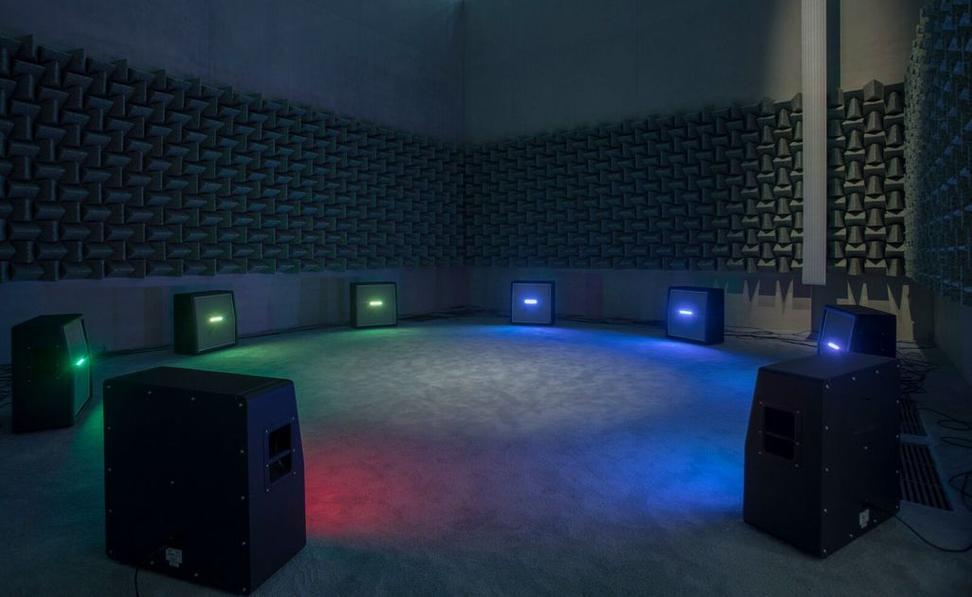 This fall at San Francisco's Asian Art Museum, British-Pakistani multimedia artist Haroon Mirza (b. 1977, London) brings electricity to life in his new project The Night Journey. Mirza’s site-specific multimedia installation — constructed from vintage audio-visual materials — invites us to explore the relationships between optics and acoustics, seeing, listening and feeling. By translating an early 19th-century painting of the Prophet Muhammad from the museum’s collection into light and sound, Mirza alters our experience of a conventional art gallery space, raising larger questions about our perception of the world around us and the network of cultural associations pulsing just below the surface.

From Sept. 7- Dec. 9, 2018, visitors can enter a darkened room at the museum where they will be surrounded by speakers emitting the sounds of electricity — buzzing, humming, droning, hissing — keyed to a source code derived from a pixelated image of the original painting. This code also activates colored LED lights, unspooling and looping Mirza’s kinetic score. Mirza, who grew up in the UK immersed both in the Sufi music of his parents and the electronica of his peers, is interested in the shifting boundary between noise and music: “All music is organized sound,” he says. “It’s just the perception and the context that defines it as music or noise or sound or just a nuisance.”

For this project, Mirza pixelates images of artworks in order to translate them into his source code. This code, in turn, powers the electrical impulses in the form of sound, light and color to allow us to hear, see and even feel artworks in new ways.  Mirza’s custom build media system, which he calls A C I D G E S T, was originally a commission for the Pérez Art Museum Miami (on view July 21, 2017 – July 29, 2018). Like the DNA transcription suggested by the system’s name that draws on the same letters used to represent DNA nucleotides, this method of artistic translation helps reveal the invisible patterns that structure our lives.

In Mirza’s Miami installation, the system’s score was created in response to PAMM’s collection of 20th-century concrete poetry (images devised from type-written letters and words). To adapt the work to its setting at the Asian Art Museum, The Night Journey will be an evolution of the earlier work in Miami, but based instead on a richly painted Indian watercolor from the museum’s collection, The night journey of the prophet Muhammad on the heavenly creature Buraq, that dates to approximately 1800.

“It’s an image depicting the Prophet Muhammad being carried from Mecca to Jerusalem, where he ascended into heaven for an encounter with God, so it’s both a physical journey and a spiritual one,” explains exhibition organizer Karin Oen, assistant curator of contemporary art. “Haroon Mirza is very interested in the translations of ideas, stories, and experiences from one medium to another, and the limitations of expression in various media including prose, poetry, song, and imagery. Whether you spend one minute, one hour or one whole day immersed in The Night Journey, Mirza demonstrates that our perceptions of the world around us are biased, and our minds and bodies are constantly translating information from one form to another.”

By experiencing an installation composed of geometrically arranged AV components producing dynamic sound and light, visitors undergo a major cognitive shift from looking at a miniature painting. “We see this type of translation across the arts: it’s also a significant shift to tell a story with dance and music instead of prose, or to translate poetry from one language and culture to another,” continues Oen. “These are all variations of symbolic systems that give shape to what’s hard to define or describe.”

The Asian Art Museum’s historic painting depicts the face of the Prophet Muhammad, a convention that has at times been seen as a natural part of Islamic art and at times has been regulated or forbidden. Mirza’s elaborate coding process means this particular representation will not be publicly shared as an image in the conventional sense. Instead, the interaction of the primary colors of the LEDs, the sonic pulses emitted by the speakers arranged in a circle, and the time spent by the visitor in the comfortably padded gallery space itself will interact to offer an unorthodox, though fully realized, experience of the original artwork.

“The night journey of the prophet Muhammad was selected in part for its theme of a voyage of transformation,” says Oen, who completed her doctorate in art history at MIT and was drawn to Mirza’s deployment of scientific concepts to artistic ends. “The painting connects to his interests in Sufi mysticism, meditation and mind-body practices.”