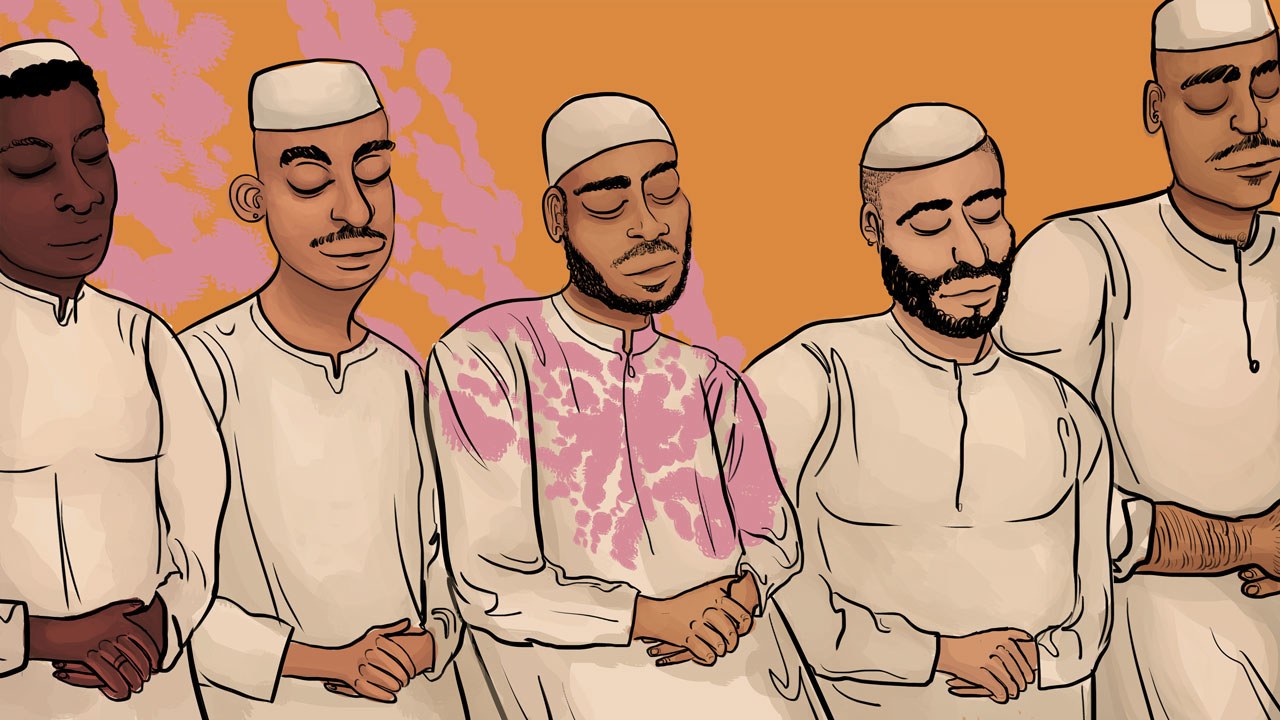 In December of 2016, my parents surprised me with a rare opportunity: our family would be making a trip to Mecca to perform Umrah, a deeply spiritual pilgrimage. Umrah consists of visiting Islam’s most sacred mosque and several other religiously significant sites to perform prayers.

The chance to go on a trip like this is incredibly important, as it is spiritually demanding and not to be taken lightly. One has to be in a clear state of mind and have a dedicated intention to visit for the purest of purposes before going on this journey. For this reason, I had to really pause and reflect on my current spiritual state before embarking on the trip.

Growing up, I had no one I could talk to about sexuality without judgment or fear of repercussions. I had to come to terms with my sexuality piece by piece, in secret and on my own. Never being able to approach an adult or spiritual leader regarding this issue amplified my feelings of loneliness and left me at a loss for what I was going through. It reinforced my fears that I was suffering through this alone.

As with any secret, the longer one carries it around, the heavier it becomes. The shame surrounding queerness only added to the stress of carving an identity in adolescence. Because I had no healthy outlet, I found that the only way I could cope with balancing school and family while struggling to understand myself was through numbing. I would constantly shut down my emotions and lie, not only to others but to myself. Have you ever fallen asleep on your arm, only to wake up and find that it has gone completely limp? It’s attached to you and yet so foreign — you can’t move it or feel with it. This is what had happened to my heart after years of numbing. Constantly burying the truth from others and myself had left me empty on the inside. It had robbed my character from understanding or valuing authenticity.

Struggling to fit in

I didn’t think there was anything inherently wrong with me being queer or Muslim — they had simply always been inherent parts of me for as long as I could remember. But the queer and Muslim communities had consistently reminded me of all the ways I couldn’t belong. I often met gay men who would ask me why I bothered being Muslim, as they assumed that it was an oppressive religion that couldn’t possibly serve me in any way. When I explained that it was a personal choice that worked for me, they would assure me that only self-hating queer people could be part of any organized religion. Others were more explicit in their prejudice, refusing to befriend me solely on the basis of my ethnicity or religion. I quickly learned that even in spaces where I was surrounded by people who were like me, acceptance was still conditional.

Being accepted in the Muslim community was just as much of a challenge. A few years ago at an event for Muslim students, I attended a Q&A session where young adults could ask imams questions about issues that they face as Muslim young adults. One person asked, “How do I deal with a friend of mine who is Muslim yet openly gay?”

The room quickly fell silent. Homosexuality was rarely discussed in such settings, so I was eager to hear the imam’s answer. He looked down at his hands for a moment, and then finally spoke.

“Homosexuality, like many struggles,” he began, “is an unnatural urge that one has to learn to control.” He looked about the room. “Much like with drinking and premarital sex, one has to rein in their desires.”

“Everyone gets strange urges from time to time,” he went on. “You know, sometimes I walk by an open second story window and I’ll get the craziest idea to just jump out of it! Doesn’t make any sense, it isn’t rational, but we all get crazy thoughts sometimes. You just have to learn to control them. As for your friend, I would avoid praying behind him — you don’t want to be praying with someone that’s in such a state.”

I sat there, suddenly very self-conscious and humiliated. I knew he was attempting to relate to queerness on a personal level for his audience to answer the question, but he ended up equating it to something as terrible as committing suicide. The sad irony that suicide attempts are four times higher for LGB youth and even higher for trans youth seemed lost on him. I left the session feeling deeply ostracized. It was unnerving being surrounded by people all being taught that my faith was less valid.

Over time I grew tired of people assuming that I was any less of a Muslim, deciding for me that one part of my identity should automatically negate the other. I found myself stuck at a crossroads. I could suppress my sexuality to feel accepted among Muslims or I could suppress my faith to feel welcome in the queer community. Both options required denying an intrinsic part of me, and neither option was authentic to who I was.

For any Muslim, the chance to go on Umrah would have been the opportunity of a lifetime. However, I found myself worried about going on this trip. What if I didn’t feel anything when I got there? What if I traveled all the way to the other side of the world, only for me to feel empty and have no connection at such a holy place? What if all the doubts people had instilled in me were true, that one really could not be both Muslim and gay? These thoughts absolutely terrified me. With only two days left before departure, my anxiety was at an all-time high. I settled on giving myself up to wherever God wanted to take me and see how I felt when I got there — no pressure or expectations.

I flew into Mecca a few days later, my heart somehow full of dread yet eager at the same time, ready to experience whatever journey awaited me. I had grown up hearing countless stories from friends and family who had gone on this exact trip, how spiritually rewarding it was for them, and I was curious to see how it would turn out for me. I remember being told how crisp the holy Zamzam water tasted when you drank it from the fountain, and how cool the white marble tiles felt against your bare feet when you walked around the grand mosque courtyard, joined by thousands of worshippers.

The first time I saw the Ka’aba was surreal. The building was so simple in its composition, yet it held an incredibly commanding presence. It was tall and cubed, draped in a rich black cloth with Quranic verses stitched along the top. It stood, bathed in white light, in the center of a massive multi-level courtyard, full of thousand of people in various stages of prayer. Closest to the building was a ring of several hundred people, circling the building counterclockwise in a form of worship called tawaaf. They walked in groups, families holding hands, while saying prayers. Those on the inner part of the circle were eager to get as close as they could to the Ka’aba, tears flowing from their eyes, reaching out with their hands to touch the sacred mosque, the place they had faced to pray their entire lives. I watched them with interest, wondering if I would feel any such strong emotions while here.

The first few days flew by in a blur, busy performing the different rituals with my family. We went from one historical site to another, learning of where various religious figures had prayed or performed significant acts. One thing that stood out to me as I walked around was that everyone performing Umrah had to wear the same outfit: two unstitched plain white pieces of cloth for men, and a single robe and headscarf for women. There was something so beautiful about seeing people come from all around the world and different walks of life, all reduced to the same plain garment. It reminded me of what I had been taught growing up: in the eyes of God, we were all the same.

This beautiful moment of intimacy I was experiencing with God, this deep connection with my faith, was not hindered by my sexuality but rather intensified by it. Being queer had made me a stronger Muslim.

On our last night there, I found myself alone and decided to go for a walk, as I needed some time to finally reflect. I snuck down from our hotel room and into the courtyard of the grand mosque. It was a little while before sunrise, the crowd relatively sparse compared to the throngs of worshippers usually circling the mosque during the day. I found myself for the first time on that trip being able to walk right up to the Ka’aba itself, the house of God that I had turned to face for daily prayers ever since I was a kid. I placed my hands on the exposed cool black brick and put my forehead against the wall, closing my eyes and taking in its sweet smell. Suddenly, despite having already been there for several days, the entire gravity of the situation finally caught up to me. I squeezed my eyes shut even tighter and tuned the world out. This was my most intimate moment with God.

I began to reflect. I knew I had been hesitant to come here. The last few months had been a complete roller coaster that had tested my faith, so I consciously put aside all my baggage and simply talked to God in the way I knew best — through gratitude. I stood there for what seemed an eternity, thanking God for everything under the sun. Despite my struggles with faith, I could still find so much to be grateful for. With the gratitude pouring out of me, I found myself overcome with emotion. But there was one topic I found myself avoiding. While I could thank God for every other hardship I had ever endured for making me the person I was today, I was scared to thank God for my sexuality. Years of hiding and being shamed wouldn’t allow me to do it.

I stood there, angry and confused with myself. How dare I come this far to be this close to God, only to feel like I had to hide from him? To feel shame in front of the deity who knew me, even before I knew myself? If being queer was something I had been born with, something he had given me with just as much purpose as everything else I had just thanked him for, what was there left to hide?