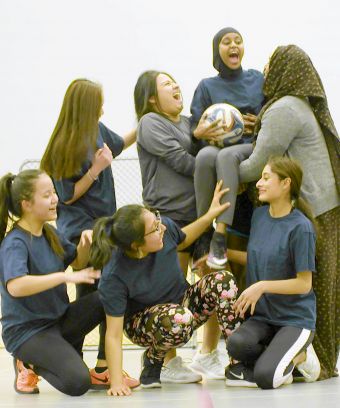 Growing up in Yemen, Zaynab Abdi loved watching boys in her community play soccer, but was never allowed to join in on their games because she was told, "it's not a sport for women." Sometimes, Zaynab would cover her hair or pretend to be a boy just so she could get away with playing with them. But, eventually the boys would catch on, tease her, or say that they were "ashamed to be playing with a girl." Years later, Zaynab's life was turned upside down when she was forced to move to Egypt,and then the United States as a refugee. Throughout this tumultuous time, soccer remained a constant in her life.

When Zaynab was 17, she was placed in an international high school in St. Paul, Minnesota that offered specialized ESL classes, but there was no soccer team or gym. As an active student council member, Zaynab went to the head of the school district to explain that she and her classmates needed a gym and space to play and exercise. But, her main concern was that there was no soccer team. "I was like, Wow, I didn't have soccer in my hometown and to come to the United States and not have soccer — that's crazy," she says.

IF THEY DON’T SCORE A GOAL FOR US, WE JUST LAUGH, AND THAT HAPPINESS IS JUST AMAZING. THAT TEAM MADE ME LOVE SOCCER MORE AND MORE. IT’S NOT ABOUT WINNING AS MUCH AS HAVING FUN WITH MY TEAM.

ZAYNAB ABDI
”
The school district worked hard to get the students a gym and a soccer team, but the principal told Zaynab she needed to convince her friends to join the team. "Mostly every single one of us is an immigrant or refugee and have been going through a lot of things," she says. "They're struggling everyday, and share a trauma of war or conflict in their home. So, most people were like, No, I don't want to." With Zaynab's persuasive prodding, she was able to create a team of 15 players from every country, religion, and race — many of whom had never touched a soccer ball before.
Now in college, Zaynab was featured in a 60-Second Doc as part of a Red Bull series that highlights women breaking barriers in soccer (which you can watch below). She spoke to Refinery29 about how her team helped her find a "sisterhood" in the United States, and what it means to be a refugee.
When did you get into soccer?
"I love soccer. Back home, I loved watching the sport soccer, watching the players going in the World Cup, I was so excited. I feel like I didn’t see a lot of women in sports, because on TV, they show you the men's [team]. When I came to the United States, I watched the 2016 U.S. World Cup, and that was the first time watching women and that was amazing. I loved how they played.
"In the United States, they show the soccer team of the women on TV, but outside [of the U.S.] you would never see a lot of that. Just like, men playing soccer, and games, and the World Cup were male — that's it. That's why I had never known there were women soccer players. For me, I feel like growing up, I was like, Can I really be that professional to go to that level? I definitely had that passion even in my high school.