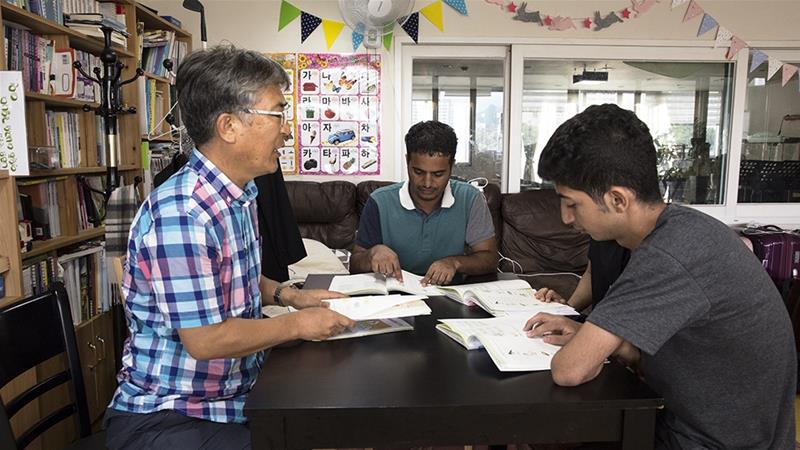 When Cristina arrived on South Korea's Jeju island last December, she thought the move from Anyang, just outside capital Seoul, would help her catch up on life after a busy decade.

Working with the migrant community in Seoul, Cristina's organisation wanted to expand into other parts of the country. Jeju, a tourist destination with a visa-free policy in order to boost tourism, had migrants who might have needed help, Cristina thought before relocating.

"When I first came to Jeju, I thought there wasn't much work to do here. It's a small island, not too many people and I will be able to get some rest too," Cristina, who is from Romania, told Al Jazeera in her refugee shelter at the Naomi Centre.

"But then God sent me so many people. I don't get any rest now and there are no off days. God sent me here to help these Yemeni refugees."

More than 550 Yemeni nationals have arrived on the island since April, seeking asylum and refugee status. The government has barred them from leaving the island and entering mainland Korea.

Although they are allowed to work, the opportunities are limited to washing dishes at restaurants, fish farming or fishing at sea. They are often subject to long hours of manual labour, resulting in injuries and health issues. There have also been reported cases of assault at work and non-payment of wages.

South Korea's refugee acceptance rate stands at around four percent. The Yemenis' arrival, mostly from Malaysia - to which they fled war-torn Yemen - sparked an online outcry and protests on the island, as well as Seoul.

The island has a population of around 600,000 and a recent survey of 500 islanders revealed 90 percent felt insecure about going outside since the Yemenis' arrival.

Most of the Koreans protesting and calling on the government to deport the asylum seekers have never met a Yemeni. But an increase in fake news has inflamed an anti-Islam sentiment among the Koreans, driving protests and forcing the government to take Yemen off the visa-free list and also tweak its refugee policy.

The Yemenis arrived on the island with limited cash, unsure of how they would survive and what their future would look like. Without jobs, and with their movements restricted, almost all of them were staring into the unknown, fearing the worst - being homeless - when the cash runs out.

Lee Jung-hoon is a 65-year-old Jeju resident who has given shelter to five Yemenis, providing them food and teaching them the Korean language on a daily basis.