On the roof of the Met, her cinematic bronze sculptures inject figurative traditions with a dose of pulp science fiction. 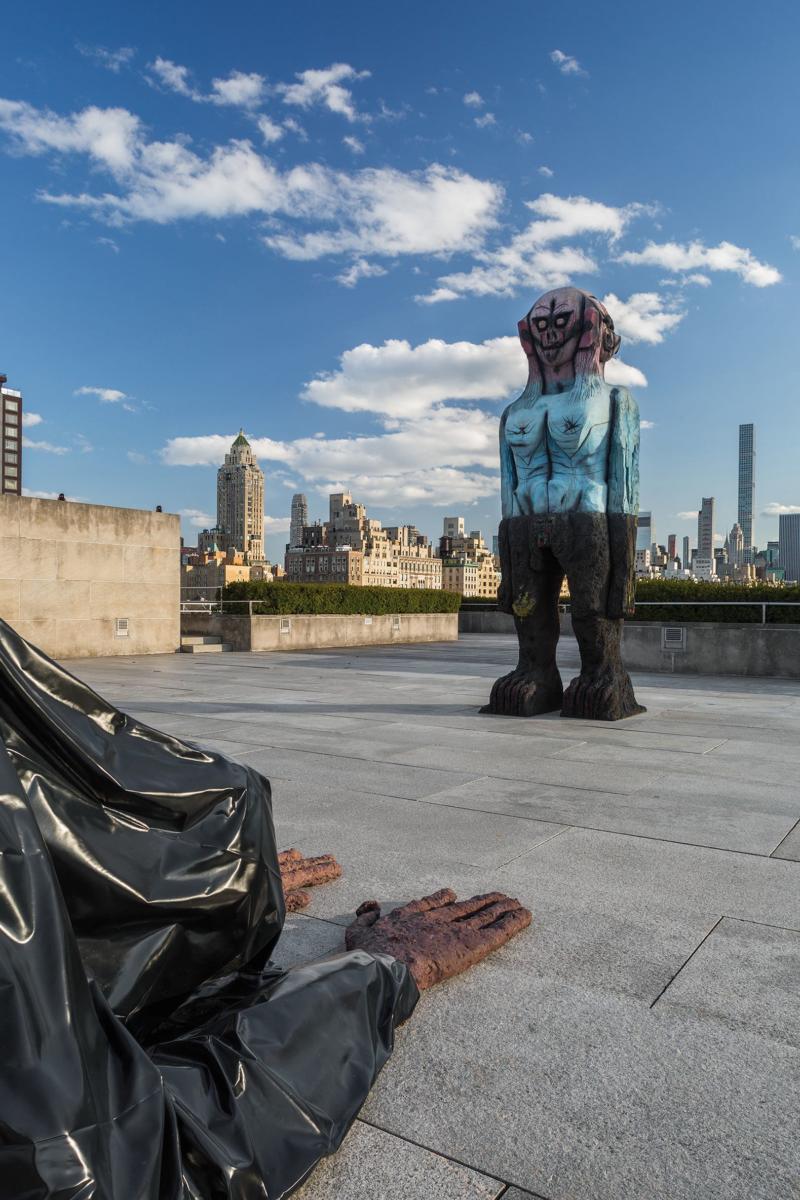 n a classic episode of “The Twilight Zone,” a woman has surgery to correct her appearance. The twist is that she’s a Hitchcock blonde in a world where the norm is a face so contorted that it looks Cubist. In Huma Bhabha’s spare, striking installation on the roof of the Met—a pair of monumental figures, one prostrate, either in prayer or in fear, and the other a battle-scarred, five-faced warrior-golem—she similarly flips the script on conventions of beauty, while injecting figurative traditions (Eastern and Western, ancient and modern) with a dose of pulp science fiction.

The title of Bhabha’s exhibition is “We Come in Peace,” a line adapted from the cult-classic movie “The Day the Earth Stood Still,” which concerns an extraterrestrial landing in Washington, D.C. Bhabha also arrived in the United States as an alien, an art student from Karachi who earned an M.F.A. at Columbia, in 1989. “I’m from a broken place, living in a breaking world,” she once told an interviewer, commenting on her childhood in post-colonial Pakistan and the war-torn world post-9/11. (The artist relocated from Manhattan to Poughkeepsie in 2002.) Her aesthetic reflects this sense of fragmentation, valuing the cobbled-together over the monolithic.

The characters on the rooftop are bronze, cast from molds of sculptures the artist made in her studio using low-grade materials. Bhabha carved the twelve-foot-tall alien-monster-god from Styrofoam and cork; the cast is finished with a pan-gender patina of pink, blue, and scorched earth, and a demonic face where it ought to have genitals. Graffiti-like marks of red, green, and yellow flicker at its heels, the colors of a Rastafarian flag: one love; maybe they do come in peace after all. The eighteen-foot-long supplicant was fashioned from unfired clay, with two outstretched hands extending from a shroud of black plastic, at once a burqa, a body bag, and a collected bundle of trash. In lieu of feet, the piece has a tail, an assemblage of lumpen clay, perhaps an allusion to the demonization of the destitute and the displaced.