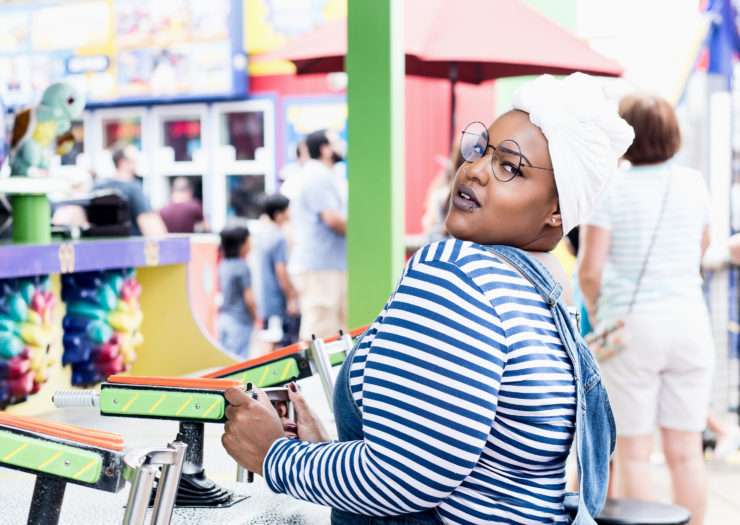 No one has the right to judge me and my spirituality based on the decisions I make for my body.

I used to be a card-carrying member of the “haram police,” that self-selected group of Muslims who take pleasure in judging other Muslims and what is “not allowed” or “haram.”

I was the girl who was a virgin until 19, never dated, didn’t smoke weed. My mother only fed us halal meats and read the Quran to us before we went to bed and when we woke. We weren’t allowed to watch movies over a PG-13 rating, and that was pushing it; we had to close our eyes if there was a kissing scene.

My mother wasn’t so much against birth control as she was for abstinence until marriage. We were homeschooled, and she and other Muslims made abstaining sound so easy: Young girls and boys who had sex before marriage were weak and destined to go down the wrong path. I was stronger than them. I was different. I was holy! I really believed that I could be that “good” Muslim girl and wait until my future husband and I had united under God.

That was until I turned 19 and moved out. My mother’s world had become controlling and overbearing, and I figured out quickly that the world was not as it was back at home.

Shortly after living on my own, I figured out that my bodily urges were much stronger than my religious upbringing. I became sexually active, and a year later, I got married.

I went to the doctor and requested birth control pills. I knew for a fact that I didn’t want to have a trillion kids like a lot of the Muslim women I knew had. Most of those women hadn’t held a job, were overly dependent on their husbands to pay the bills, and hadn’t had anything past a high-school diploma (if that). They weren’t traveling to faraway lands or experiencing the wonders of life. A lot of them became career mothers, usually pregnant every other year. Cheers to people who loooooooove having buckets of kids. But that just wasn’t me.

One day, a few of my girlfriends and I were chatting on the couch. Someone in our circle had gotten pregnant. Again.

“What do you mean?” someone asked.

By the facial expressions, you’d think I just tossed a cat out the window. I was reminded of the Muslim parents I knew who were hypercritical of other people’s children and their own daughters. Their sons could make it rain in the strip club, and it would be given 99 excuses plus one. But daughters get damned to hell forever for the simplest things. Of course, this trickled down from Muslim parents to Muslim children, and my girlfriends ranged from middle-school judgy to Muslim-parent judgy.

Many Muslims have told me that birth control is against God and stops his creations from being born—ideas that help keep Muslim women’s use of contraception low around the world. Others argue that it has permanent effects on your reproductive system and causes a woman to become barren—despite the fact that millions of U.S. women, including Muslims, use contraceptives with no catastrophic side effects.

I’ve been verbally abused by Muslims and non-Muslims for my decision to utilize birth control. I’ve been told that I’m denying my husband the right to have children, that it’s unnatural, that I’ll never be able to have children, and my favorite, that’s it is what I was created for: to birth lots and lots of kids.

Why am I considered selfish because I want to take control of my body? I mean, God gave me MY body. Not my husband at the time. Not some acquaintance. Why were other people so adamant on policing my reproductive system in the name of Islam?

Years passed, and I was still unwaveringly on birth control. I’d get asked, “Why don’t you have any kids yet?” My usual responses: because I don’t want to be a mom or I have no money or I’m pursing an education.

None of which were the correct answers for men and women alike. Every time the topic came up, I’d get shunned, told that it wasn’t Islamic, that I was poisoning my body. I’d go to my gynecologist in fear of infertility. And every time, she’d assure me that I’d be fine.

One time, an older Muslim lady asked my then-husband why we hadn’t had kids. He said something clever as to not expose me.

“Because I’m on birth control and when God wants us to have one, we’ll have one,” I said loudly.

She cut her eyes at me and pulled him away. I was shocked when I heard her telling him that she could help find him a wife that’d give him a child. He laughed it off as he usually did when he was confronted with uncomfortable situations. Although he’d always wanted a big family, he accepted my decision.

The last straw was when an old friend told me that I was selfish for being on birth control because lots of women are infertile.

“Those pills are poison,” she huffed.

At that point, I’d had it. “So, the prescribed painkillers that you asked me for yesterday aren’t poison?”

Vicodin is okay, but birth control is not. Things that make you go hmmm …

Over the years, I’ve gotten shit from Muslims and non-Muslims for my responsible decision to protect my body from multiple foreign invaders. Babies. I can barely afford rent or my car note. Ugh? How much does a kid cost again? *Counts loose change.* Everybody wants to be a Google Gynecologist instead of focusing on themselves.

You are not selfish for wanting to be on birth control. Or not to be on it. You are not less than another Muslim if you use it. It’s your body, your choice.