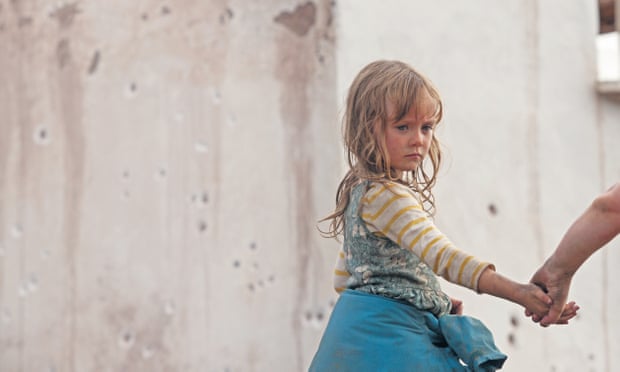 What’s the difference between a refugee family and your family? Luck – that’s all, says Arta Dobroshi, an actress and film-maker who lived in a camp after fleeing Kosovo as a teenager, an experience that inspired her new film.

Just have fun,” Arta Dobroshi’s parents would say to her and her brothers as they were growing up. “Every day they said it: don’t worry about things – just have fun.” What made their attitude extraordinary was that they were living in a war zone. But alongside dodging bullets, and being forced out of their home into refugee camps, her parents never stopped being happy, positive and full of hope for the future.

“Whatever we were faced with, my parents knew that the most important things you have to give children are hope, laughter and joy.”

But it wasn’t easy – and it isn’t easy now for the millions of refugees who, like Arta’s family in Kosovo in the 1980s and 1990s, were either living with constant danger or fleeing from it. “Life would be normal for a while and then, suddenly, we’d be running down the road, chased by the police. Or there would be teargas coming into the classroom. Several times we had to leave our home to live elsewhere because it was too dangerous to stay. When we were really up against it, I remember thinking: if only the people who live in freedom knew what we were going through, they would certainly help us.”

Today Arta is an acclaimed film actor but she has never forgotten how it felt to be caught up in a war, or how sure she was that if people only knew, they would act. Which is why she’s made Home, a short film that premieres in London this weekend and is designed to do the thing Arta always believed would make all the difference: to put the lucky people into the unlucky people’s shoes.

The film follows the fortunes of a family with two young children who are forced to leave their home. They have to pay people smugglers to take them in car boots – the kids in one, the parents in others. There’s fear and violence. The couple are forced at times to carry their traumatised children across fields and through battle-ruined buildings and at one point have to run for cover when they find themselves in the middle of fighting, before eventually winding up, dirty and frightened and hungry, sitting around a fire in a refugee camp.

It’s a familiar tale, but here’s the twist: the family isn’t Syrian or Afghan – it’s British. This is a family just like yours or mine, putting their kids into the boot of a car, carry them past soldiers firing guns, making them walk miles across the open countryside and scavenging for food and clothes to keep them warm. Like the Save the Children film that went viral a couple of years ago, which portrayed everything happening in Syria against the backdrop of London, it’s amazing how disturbing it is to see all this happening to people whose mother tongue is English.

It couldn’t happen to you? Oh yes it could, says Arta, who is the film’s executive producer: we would all do everything we could to keep our children safe. The difference between a refugee family and my family or yours can be summed up in one word: luck.

“No one wants to leave their home – we never wanted to leave our home,” Arta says. “We stayed in Pristina as long as we possibly could. We stayed through all the unrest and the fighting, but in 1997 things became really hard – people were being massacred and my parents thought it was really dangerous; more dangerous than ever before. We didn’t want to leave – it was so hard. In the end, I went with my two brothers and my mum, and my father stayed with my uncle and grandmother, who was 80. We went to Macedonia and lived in a camp for a while and couldn’t wait to get home.

“After a few months we got back and I remember it was still really dangerous. For a while we couldn’t move around and my father was in a different place. When we eventually got to meet up again, it was one of the most emotional experiences of my lifetime. We didn’t know what had become of him.

“This is the kind of thing that happens in war. It’s not something anyone would choose. It becomes normal for refugees, but not because they are somehow different as human beings – they are not! They’re just like you and me … in fact, that was me.”