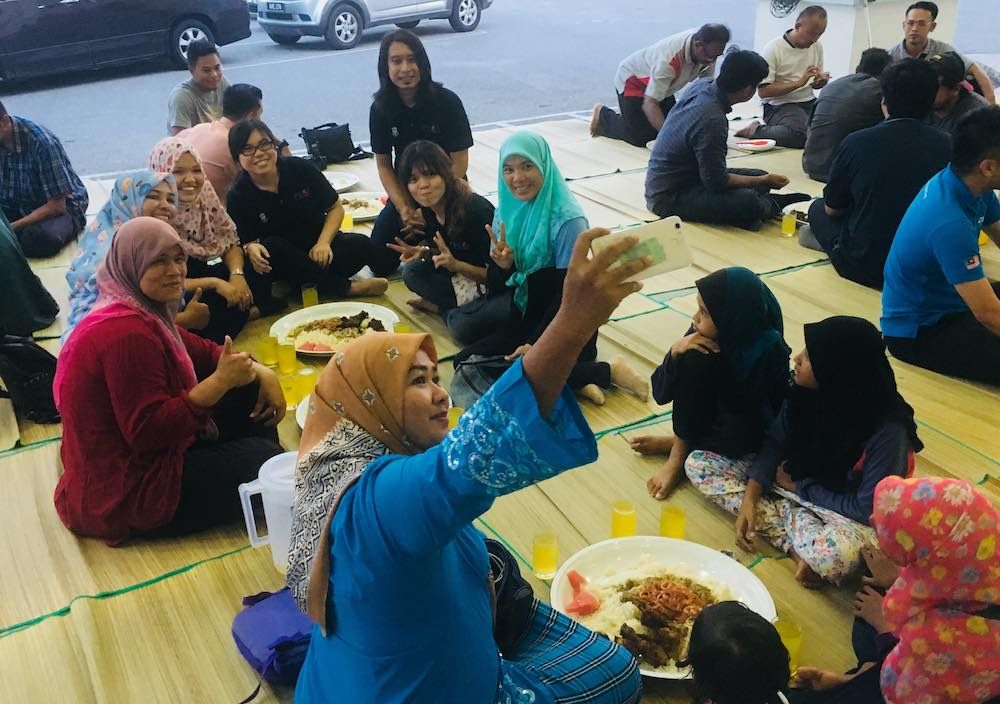 They had never been inside a mosque, let alone joined Muslims to break their fast in one. They did not know that they could, until yesterday evening.

Some of its Chinese members helped locals cook "bubur lambuk" at the mosque in the afternoon and went into Kg Sungai Chenaam with their Muslim friends to distribute the porridge door-to-door.

"I had never helped people cook in a mosque before. It was a special experience," Tunku Abdul Rahman College student Chuah Tiong Yee, 21, a Peka member said.

The quantity surveying student said his takeaway from the event was that he learnt why Muslims distributed bubur lambuk (rice porridge) during Ramadan.

"Giving the porridge means sharing good will, extending well wishes...it is like why we Chinese give mandarin oranges during Chinese New Year. I thought 'wow'," he said.

Another Peka member, engineer Ho Man Yee, 27, said she felt happy helping out at the mosque and learning about the traditions of Ramadan.

"It was my first time breaking fast with Muslims in a mosque. I used to think I couldn't do this in the mosque as a non-Muslim.

"The local community is also very friendly and welcoming. We all worked and helped each other prepare for buka puasa without caring whether we were Muslim or not," she said.

For buka puasa in the evening, the mosque prepared a "nasi talam" style meal, with rice, chicken, mutton and watermelon served in large trays that up to four people will share.

By then, 27 northern region Junior Chamber International (JCI) Malaysia chapter leaders invited by Peka had arrived to join the locals to break the fast. They helped carry the large trays of food to the dining area.

JCI Malaysia national executive vice-president Chew Hooi Mei said the chapter presidents and top office bearers had a lot of fun at the eye-opening event, as it was the first time for any of them to enter a mosque to break fast with Muslims.

"Such invitations are very rare. This is such a great opportunity to understand the Malay and Muslim culture during Ramadan," she told The Malaysian Insight.

Chew said she hoped this would open new opportunities for JCI, whose members are youths aged 18 to 40, and Peka to work together in multiracial community programmes.

Peka's Adam Adli Abdul Halim said this Ramadan in a new Malaysia was a good time for reconciliation, and for Malays to give their non-Malay and non-Muslim friends a chance to experience something different.

"Someone had said somewhere that the leaders are fine but the people are disunited. In the past, there was little chance to get the people to come together.

"Today (yesterday), we are starting from this small community in Sungai Acheh. We should encourage this culture. Even the Quran tells us to make friends and know each other," he said.