By Claire Messud for Harpers.org The world into which I was born no longer exists, of course. I’ve been around for almost half a century, so it was inevitable. My parents — one French, raised largely in Algeria; the other Canadian, from Toronto — were born in the Depression and grew up during the Second World War, a time of uncertainty and restraint that marked them all their lives.

Although our household lacked for nothing, my parents wasted nothing. My mum taught us to repair moth holes in sweaters and to hem skirts; she meticulously ironed all our clothes, and also pillowcases, nightgowns, and knickers, not to mention my father’s endless handkerchiefs. Our fridge was eternally a mess of tiny saucers of leftovers — half a lamb sausage, a tablespoon of gratin dauphinois, or some day-old marinated salad — carefully sealed with Saran Wrap. My mother washed out Ziploc bags for reuse, kept a jar of gnarled twist ties on the window ledge, and, under the sink, hoarded stacks of plastic supermarket tubs. You never knew when you might need them. 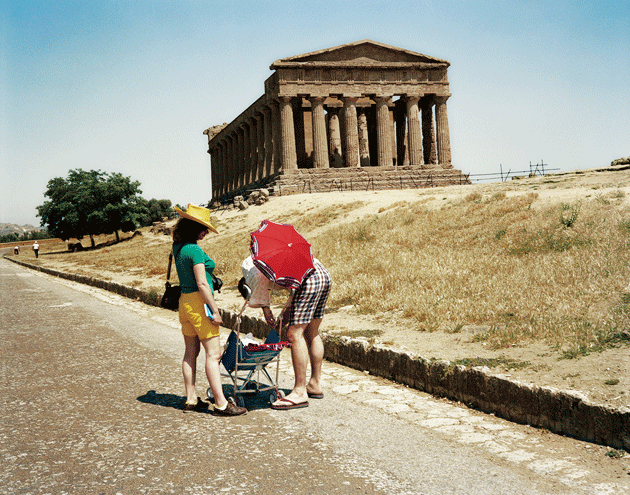 Ambitious and eager for the world, my parents pushed their children toward academic endeavor and, they hoped, to openness and curiosity, which, at least in my mother’s case, had differentiated her from her parents. When she announced to her petit bourgeois Torontonian mum and dad that she intended to marry my French father, whom she’d met while studying in England, my maternal grandparents wrote a letter to their French counterparts expressing skepticism about the union: they spoke of the need to keep my mother “in the style to which she is accustomed” and fretted over the well-known fact that the French were rampant adulterers.

My parents didn’t aspire to material wealth, and they didn’t have much interest in popular culture. They were, in this sense, un-American. They spent what they earned on their children’s education, on books, and on travel. They read voraciously and explored as much of the globe as they could — before we were teenagers, my sister and I had been whisked to Chichicastenango, Lalibela, Nadi, and beyond.

As a child, I didn’t always grasp the wisdom of my parents’ choices. Sure, I loved to travel, and I loved to read (my father would complain when I combined the two: “Look up from your books! You travel like suitcases!”), but mostly I longed to have jeans from the Gap, to own my own record player, to wear my hair feathered like the cool girls at school. I watched a lot of TV — from fifth grade on, I came home from school to an empty house (my mum was in law school then) and kept company with Get Smart, Gilligan’s Island, and what I considered a hipper set of shows, such as Diff’rent Strokesand Family Ties. By seventh grade, I took careful note of my friends’ grown-up acquisitions, all of which were beyond my hope: Heidi owned a water bed! Liz got a tweed skirt suit from Woolco! Beatrice wore blue eye shadow!

In retrospect, my sense of what and how I should be was wonderfully partial and fragmented — suggested, rather than insisted on, by rock music, benign sitcoms, and the kids around me. In middle school in Toronto, I was pretty autonomous: I had a bus pass, a bike, and a house key; much of the time, nobody worried about me or knew where I was. It was the late Seventies; we had bad haircuts and wore terrible clothes, a universal unloveliness of which there is mercifully little visual record. If we had acne, we had acne; if our noses shone, they shone.

Even then I had a sense of being less serious than my parents, less real somehow, more readily distracted by nonsense. Born with the twentieth century, their parents — three of my grandparents lived into their nineties — remembered the First World War. My parents themselves — my father in particular — had known privation, had endured the grimness of wartime, whereas my own life, they often reminded me, was safe, easy, and luxurious. My friends and I could only ever be armchair radicals.

Along with this hazy sense of inferiority came a sort of absolution — broadly shared, I think, in my generation. The comparative ease of our upbringing first inspired guilt, then defiance. If, as our parents said, we should be eternally grateful for our comfort, then couldn’t we be grateful without feeling bad about it? Why should we accept that the hard path was always superior? Why shouldn’t we enjoy life’s pleasures? Why believe that reading Beckett or, God forbid, Heidegger, was an innately more worthy activity than watching music videos? Says who? But the rebellion was half bluster; the wiser voices of our elders nagged at us.

For me, at least, this tension has never been wholly resolved. The lure of certain distractions is still considerable — give me a TV and I can watch almost anything with a dramatic narrative. And yet I know from personal experience that an hour spent reading Beckett is an hour that stimulates and abides in a way that an hour watchingScandal never can. From my parents’ example, I know that insofar as is possible, one must daily choose what matters, that this will be found within, not without. And that then, crucially, one shouldn’t waste a thing — not a leftover, not a Ziploc bag, not a single hour of our time on this earth.

But the message that our generation has disseminated into the broader culture isn’t this. It isn’t even conflicted. We’ve cast off the grousing of our elders and are teaching our children differently. We waste resources galore (in spite of our belated efforts to change), and, glued to our devices, playing video games, or checking the Daily Mail,we waste enormous amounts of time — even while pretending otherwise. I can’t tell you how many women I see buying bathing suits on their phones on the subway. But we persuade ourselves that this is a more substantive activity than having coffee with a friend: shopping while traveling, we’re multitasking! We worship purposefulness. To embark on an endeavor that has no clear aim — to amble through a city, or to spend an entire afternoon conversing in a restaurant, or to lie in bed and read a book chosen at random from the shelf, or to major in English literature, for that matter — has come to be seen as wasteful. 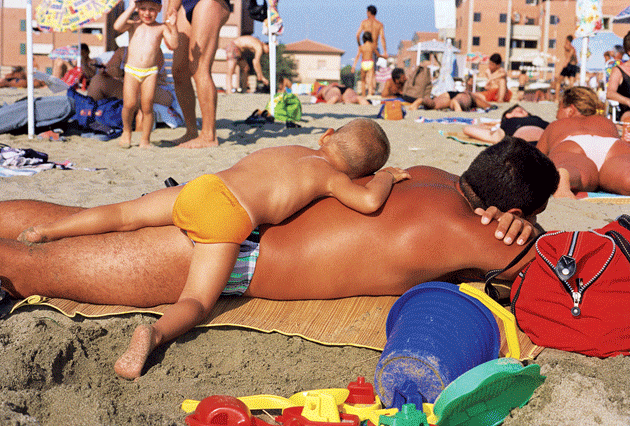 In such a context, the need for art, film, and literature to entertain becomes disturbingly pressing: that is its purpose. It’s the reason why we bother with it, and without a reason, who would bother? Art that entertains less readily, that might demand real effort and persistence and in so doing illuminate some aspect of how we live — such a prospect is too vague, the return on investment too unclear. I worry about the future of philosophy, art, literature, and strangeness.

What does this mean for our children? In my insistence that some experiences are richer than others — that reading Buddenbrooks will prove more nourishing than scrolling through Instagram stamping likes on photographs the way an immigration officer stamps passports — I seem to my thirteen-year-old daughter and eleven-year-old son as judgmental and austere, as antediluvian, as my own parents sometimes seemed to me. When they’re reading or watching, they want to relax. They do a great deal more homework than I ever did; they participate in an endless round of extracurricular activities. If they’re not on the run from soccer practice to piano lessons, they’re busy with text messages and Snapchat, with Tumblr and Vine. They revere YouTube as the repository of all knowledge — which in some ways, of course, it is.

It seems on one level pointless to pressure them to resist the pace of their lives and the constant distraction of their media: their world isn’t mine, any more than my world was my parents’. If my son spends his afternoons watching FIFA videos on YouTube, or my daughter studying nail-painting tutorials, these are no worse ways to spend time than watching Get Smart or Diff’rent Strokes — arguably, they are better. Their world, however, is more monolithic. Now that the very understanding of experience is communal, there’s less leeway for idiosyncrasy, less patience for indirection. These days, if you can’t share a thought — either because it’s hard to articulate or because it would take more words than a tweet or a text will allow — you might as well skip it.

When I recall my formative years, of course there was loads of reading, and travel, and biking, and TV. But there was also a whole lot of boredom. I guess that’s what concerns me, as a parent: that my kids, who lack for nothing even more than I did, are not only unversed in material deprivation and insufficiently familiar with self-restraint but, most terribly, they know nothing of nothingness. Having no truly empty time, they’re unfamiliar too with the unexpected and exhilarating flowers that can grow there. 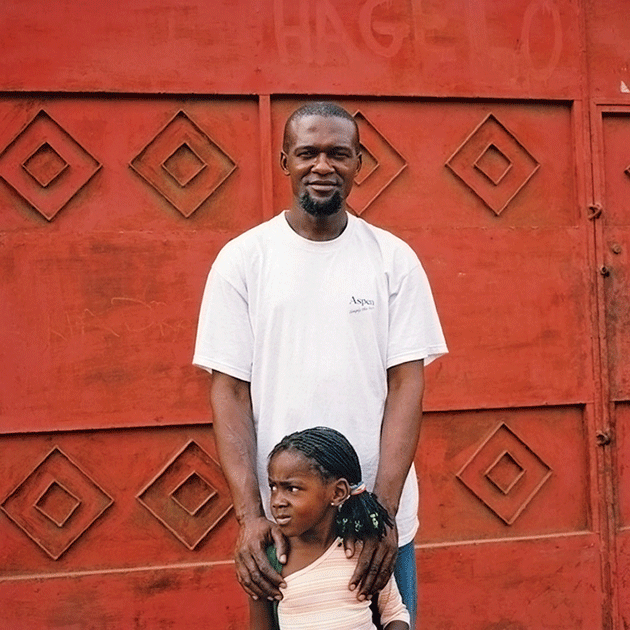 A father and daughter at a crèche, Luanda, Angola © Tim Hetherington/Magnum Photos

I want my children to embrace doing nothing, to embrace the slowing of an afternoon to a near standstill, when all you can hear is the laborious ticking of the clock and the dog snoring on the sofa, the rain’s patter at the window, the occasional swoosh of a slowly passing car. Remember those days? The exasperation, the excruciating itchiness of them? My kids would have to dive in, live through the agony, and come out the other side. They’d have to learn to lie on the lawn watching ants scale the grass blades; they’d have to linger, digits pruning, in the bathtub; they’d have to stop, to be still, and then to wait, and wait, and wait, allowing time to fatten around them, like a dewdrop on the tip of a leaf. And then, only then, who knows what they might imagine or invent?

How can I teach them, when they’re not of an age to listen, and when, more problematically, I too often live in the world just as they do? In practice, I set a poor example, never idling or ambling or reading in bed. I’d like to figure out how to be the kind of parent who holds at bay all demands and exhortations, all fripperies and nonsense. I’d like to show the wisdom of restraint. A different version of washing out Ziploc bags and mending moth holes, it arises from the same impulse: from the understanding that if you attend thoughtfully to what you already have, you need nothing more. It’s all here, inside and in the room — not on the screen — before us.