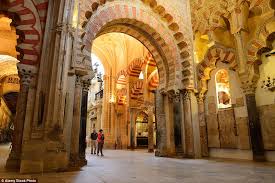 More than a millennium has passed since Spain's Andalusia region led the world in scholarship and art under the Moors, the North African and Arab Muslims who took control in 711. Their reign ended after Christian crusaders rolled down from the north, in the Reconquista, which began in the 8th centurybut took several hundred years. Surprisingly, the Moors' art was embraced by their conquerors, and an unusually large number of glorious fortified palaces and cathedrals that incorporated Moorish design survive.

Because the Christian conquerors added their own flourishes and structures to many of these grand buildings, Moorish horseshoe arches are often twinned with Gothic vaults and spires. Distinctive Moorish patterns on facades and ceilings are interwoven with the symbols of Christian monarchs. This style, unique to the Iberian Peninsula, is known as Mudejar.

Of course, in a visit to sensual southern Spain - home of flamenco and bullfighting - you'll have much more to experience than historic palaces and churches.

But here's a starting point for must-see history in the palaces and cathedrals of the three key cities of Andalusia.

Cordoba's great 8th-century mosque, the Mezquita, was the first magnificent creation of Moorish architects. At a time when little progress was occurring in Europe during the Middle Ages following the fall of the Roman Empire, Cordoba's Moors built a beautiful forest: It consists of more than 1,000 Roman and Visigoth columns supporting palm-like branches of double-decker arches in alternating red and white stripes, which seem to stretch into infinity. The ceiling is very low, and the space very dark; guides explain that this atmosphere was intended to bolster the worshipper's awareness of the caliph's authority.

The most stunning part of the Mezquita is the mihrab, a prayer niche in the wall, which you enter through a horseshoe arch. It is covered in gold and tens of thousands of tiny chips of colored glass, layered by Byzantine artisans, and topped by intertwined arches and a scalloped dome striped in enameled and gilded "tree of life" designs. (While mihrabs in most mosques face toward Mecca, this one does not; one theory holds that the position was dictated by the Roman structure under the Mezquita's foundation, while another posits that it was built to face Damascus, where the early Moors in Cordoba came from.)

Warring among Muslim factions led to a weakened Cordoba caliphate and a key victory in the Christian reconquest. Christian rulers built an unremarkable Renaissance cathedral smack in the middle of the Mezquita's infinite forest of columns. Guides will tell you that the bright side is that those Christians so respected the Moorish art that they didn't simply destroy the mosque.

The jewel of southern Spain is Seville, and in addition to its historic plaza de toros, or bullring, and nightly flamenco performances all around town, this city also has an important legacy in its royal palace and its cathedral. Seville became the capital of the fundamentalist Almohad Caliphate in 1147, but that didn't last long. The Christian Reconquista reached Seville in 1247.

Despite the Christian victory and firm-fisted rule, the art of the Moors was not only respected but embraced in the building of Seville's grand royal palace, the Alcazar. Artisans who had worked on Granada's Alhambra were imported by Christian King Pedro in 1364 to put their Moorish designs on the new palace he was building over an existing Muslim one. ("Pedro the Cruel" has gone down in history for fighting off challengers by any murderous means necessary.)

When you stand outside the entrance to the Alcazar, the longest-serving royal residence in the world and still occasionally used by Spain's monarchs when they visit Seville, you see on the facade the geometric designs of the Moors combined in intricate repetition with the power symbols of a Christian king - tiny images of castles and lions. This facade is considered the best example anywhere of Mudejar twinning of Christian and Moorish design.

The Patio de las Doncellas (Courtyard of the Maidens) is the center of the palace, with rooms opening on all sides around a long, narrow pool. It's been a location for such films as "Lawrence of Arabia" and Season 5 of the HBO series "Game of Thrones." It's a sparkling example of what you will see throughout this palace and in Granada's Alhambra: water, in pools and fountains of all shapes. The sound of fountains was valued for the peacefulness it lent to private areas of palaces that historians say were rife with turmoil and even murder, both here under King Pedro and in the Alhambra when family rivalries turned deadly during the 14th and 15th centuries.

The most important of many rooms is the Salon de Embajadores, the throne room. Christian King Pedro adopted the Islamic model: a carved and gilded wooden half-dome over a cube, considered to be the best in Spain. And the stucco in this glorious room is another reason this palace is Spain's best example of Mudejar architecture. There are images of birds among the calligraphic designs, flying in the face of Islam's prohibition of representing sentient beings.

If the Patio de las Doncellas is the center of the official part of the Alcazar, another stuccoed courtyard, the Patio de las Muñecas (Courtyard of the Dolls), was built for the royal family. It's believed that Queen Isabella I gave birth to her son, Prince Juan, in one of the alcoves that open off this courtyard. It's a challenge to find the two tiny carved doll faces that give the patio its popular name.

Across the street, the Christians put up what is still the largest Gothic church in the world over the great mosque. If you climb its bell tower for the view, you don't go up stairs, but up ramps that the muezzins' donkeys climbed several times a day. Inside, look for four enormous heralds representing the kingdoms of the Spanish crown, carrying the tomb of Christopher Columbus. It was built in 1898 when at least some of his remains (recently confirmed by DNA analysis) were returned from Cuba.

The Moors held out longest in Granada, long enough to build the Alhambra, what is considered by many to be the most important Moorish palace. Unlike Seville's Alcazar, which was intended from the start to merge Moorish and Christian styles, the Alhambra was built for Moors by Moors. Fortunately, when Granada did fall to the Christians in 1492, the conquerors valued it and even built around it.

There aren't many sights that deserve to be called breathtaking, but among them are the two 14th-century palaces within the Alhambra complex built under the emirs of the Nasrid dynasty, the last Moorish rulers, who defeated the Almohad Caliphate.

To reach the first of these palaces, you walk through the sultan's administrative area, and suddenly come upon the barrier between public and private areas, the facade of the Palacio de Comares. It's no wonder that the Alhambra's official guidebook calls this stunning facade "the peak of Nasrid art."

Inside are two standout spaces. First: the Patio de los Arrayanes (Courtyard of the Myrtles), a long narrow pool and, above, a wooden screen through which women could look down on this outdoor space. And second, most important in the Alhambra complex, the Salon de los Embajadores, or throne room. The room's synthesis of architectural and decorative Moorish concepts is considered textbook. Here, and throughout the palaces, the elaborately carved plaster once was multicolored, but now you can see original colors only in the complex geometric patterned tiles around the lower walls. Under a domed ceiling with 8,000 pieces of wood representing the heavens, two landmark events happened in 1492: the last Moorish king surrendered to King Ferdinand II and Queen Isabella I, and Columbus made a final pitch for their backing of his voyage.

Moving on to the Palacio de los Leones, you come to a large rectangular patio and, in its center, the famous Fountain of the Lions. The 12 standing marble lions, facing outward around the fountain, with spouts in their mouths, make this the top photo spot in a palace full of them.

Off the patio, positioned at 3 o'clock and 9 o'clock, are the two best-known rooms. In the Sala de los Abencerrajes, the ceiling is a stucco Muslim eight-pointed star with gorgeous honeycombed stalactite-like pendentives. Opposite it, across the patio, is the even more stupendous Sala de Dos Hermanas (Hall of the of Two Sisters). Its white stucco dome, rising over a lacy eight-pointed stucco star in an even more brilliant white, is considered the pinnacle of the Alhambra's decorative art. In both rooms, the play of shadow and sparkling light off the carved stucco is dramatic.