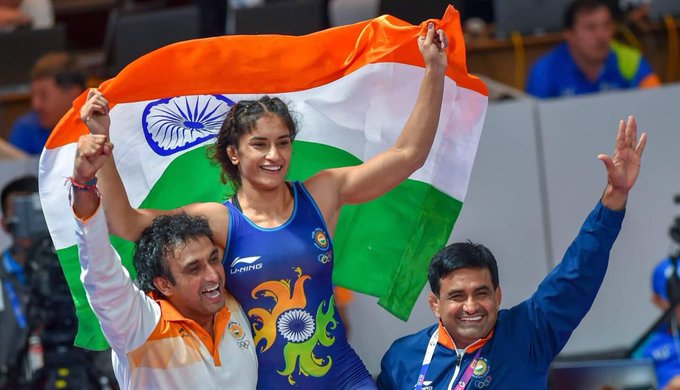 "Nothing can match the feeling of winning a Gold for #India and all the wonderful people of our country whose blessings and wishes give me strength," Vinesh posted on Twitter on Tuesday, with a photo of her and her coaches and waving the Indian flag.

The grappler won a bronze medal at the Asian Games four years ago.

Her cousins Geeta and Babita Kumari Phogat are former Commonwealth Games champions, and their extraordinary rise from one of India's most conservative states was captured in the Bollywood blockbuster film Dangal in 2016.

The northern state of Haryana, where the Phogats hail from and the film is set, has a reputation for being conservative and male dominated, with some of the highest rates in India of violence against women.

The film — Bollywood's highest grossing movie of all time — is based on Vinesh's real-life uncle, wrestler Mahavir Singh Phogat, played by actor Aamir Khan, and his struggle to turn his daughters Geeta and Babita into world-class wrestlers.

"Not only me, but all of India is proud of her. Look at what our girls can do — from wrestling in mud pits to Olympics, Commonwealth and now Asian Games," Mahavir told the Thomson Reuters Foundation by phone.

"These victories show that Indian girls, no matter where they are from, can be stars, can outshine boys. This will definitely encourage more girls to join sports."

Vinesh's on-screen uncle, Aamir Khan, congratulated her late Monday and tweeted a popular dialogue from the film: "Mhaari chhoriyan chhoron se kam hai ke!", which translates to: "My girls are no less than boys!"