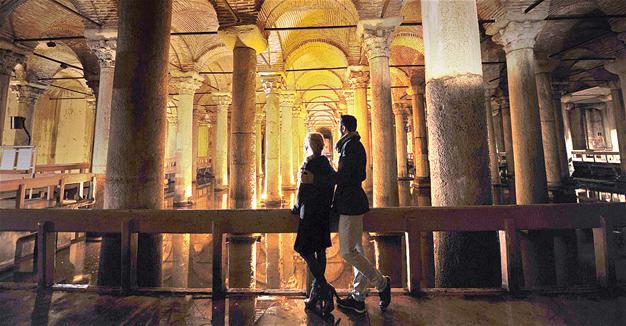 Istanbul’s Basilica (Yerebatan) Cistern, will be on the silver screen all around the world thanks to the film adaptation of Dan Brown’s thriller “Inferno.”

The film, which was directed by Ron Howard and premiered in Florence on Oct. 8, will be released in Turkey on Oct. 14.

The novel mysterious events begin in Florence before moving to Sienna and on to Istanbul, where the hero of the book, Robert Langdon, played by Tom Hanks in the film, makes an important discovery in the Hagia Sophia museum.

The Basilica Cistern, one of the magnificent historical sites in Istanbul, is located just southwest of the Hagia Sophia.

The huge underground cistern, which was built in 542 by Byzantine emperor Justinian I, provided water to the grand palace where the emperors lived during the Byzantine Empire. It was later used after the conquest of Istanbul by the Ottomans in 1453.

The gardens of Topkapı Palace were also irrigated with water from the cistern, which in the 20th century was opened to visitors as a museum by the Istanbul Municipality after restorations.

In order to prevent any damage to the historic structure, the scenes at the Basilica Cistern were shot in a film studio in Budapest. The Basilica Cistern, which has been included in a number of films over the years, also hosted some scenes of the latest James Bond series “Skyfall” as well as Australian actor Russell Crowe’s film “The Water Diviner.” Hanks, the smartest guy in the room

At a recent news conference in Florence’s Palazzo Vecchio, actor Hanks said the real draw for him to reprise his role as fictional symbologist Robert Langdon was the chance to be “the smartest guy in the room.”

“The gift that Dan Brown gave me as an actor is to play a guy who’s always curious, who’s always opinionated and who’s always searching for an answer,” he added.

“Inferno” follows Langdon as he wakes up in Florence with amnesia and has to decipher clues to stop a plague being released by an elusive billionaire who tries to tackle overpopulation.

Hanks said the film’s take on overpopulation suggests “we are creating our own version of Dante’s Inferno here in the real world.”

He added that there were places in the world where “the environment is hellacious and the people are held in slavery and there is any numbers of degrees of misery that are in fact created by ourselves one way or another.”

Much of the film showcases Florence’s historic buildings and piazzas, as Langdon speeds through the city’s rich history, solving riddles related to Florentine poet Dante Alighieri’s famed 14th century saga “Divine Comedy,” about a man’s journey through “Inferno,” or hell.

Director Howard said he was inspired by the powerful imagery of Dante’s “Inferno” and how it has resonated through centuries and generations.

“I felt that he was giving us the vocabulary of every horror movie we’ve ever seen and admired and you begin to look at it not only on a kind of philosophical level but also as a cultural, a huge cultural and political shift,” Howard said.