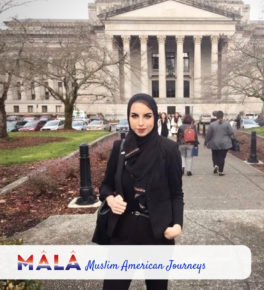 Izdihar Bailey doesn’t “look” Muslim to people, but as a convert, it’s one of the biggest parts of her identity. In her story she shares how she found Islam, how it has changed her life, and how she wants to change the narrative for those that join and are not born into Islam – an increasingly growing population.

I am a U.S. citizen, a registered voter, and an American Muslim. I’m a convert to Islam, from a military family, who now works in politics as a lobbyist – probably not what most people expect.

I come from a small, rural, low-income town in the middle of the woods, from a very “punk rock” family. I worked hard to be one of the few to leave the town, and along the way I explored many religions. You see, my family is agnostic, and when you come from a background with no religion, it’s hard to find the truth when every religion is saying they are correct.

I attended Mormon churches, Jewish synagogues, and Shinto temples. But I eventually landed on Islam as it resonated the most within me, gave me everything I was looking for, everything I wanted to feel, and more. I like to use a quote from Reza Aslan: “I think the Buddha said it right: If you want to draw water you do not dig six one-foot wells. You dig one six-foot well. Islam is my six foot well. I like the symbols and metaphors it uses to describe the relationship between God and humanity. But I recognize that the water I am drawing is the same water that every other well around me is drawing. And no matter the well, the water is just as sweet!”

I like to expand on that and say that I’ve sipped from the other wells, and this well is the most refreshing, the most thirst quenching for me.I’ve never been a stranger to being an outcast. Growing up, my views and interests where far from common where I grew up. I was always that kid with brightly colored hair, a leather jacket, calling other kids names for not knowing the capital of Estonia, and playing Dungeons & Dragons on the weekends.

Islam humbled me. Islam also saved me. I used to use escapism to solve all my problems, be it with video games or fantasy. And being a bit of an outcast — and from the financial and logistical place I was — I don’t think I’d be alive today if I had not found Islam. I truly think I would have killed myself by now.

I found it at a good place, when I was 19 and just moved to the city for school and work. It helped me stay away from many bad things. It lifted me up in the darkest and loneliest time, and now it has given me so many opportunities in my work. Converts are super common in Islam. It is the most converted religion and yet it’s a side of Islam rarely focused on. I have many strange moments due to this. People meet me and assume I’m Arab, then become very disappointed and confused to find out I’m white. I’ve even been accused of appropriating Arabic culture by a few white people, which is hilarious, since wearing hijab is not a cultural thing.