By Kareem Abdul-Jabbar for The New York Times 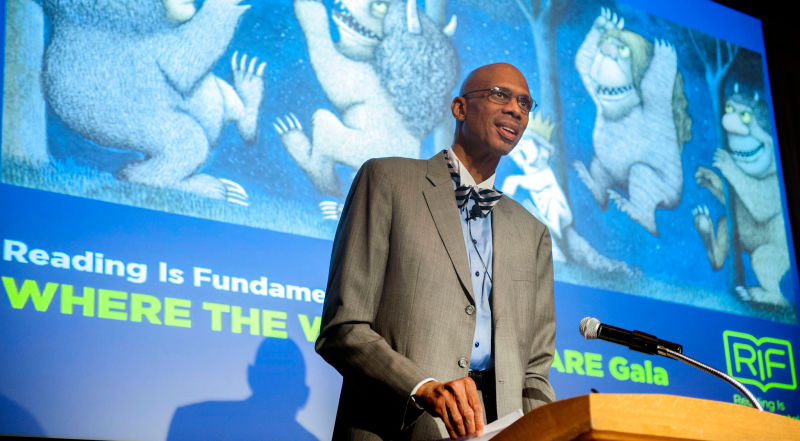 LETTERS TO A YOUNG MUSLIM By Omar Saif Ghobas

THE ATHEIST MUSLIM A Journey From Religion to Reason By Ali A. Rizv

In 1776, Thomas Jefferson’s friend Senator Richard Henry Lee expressed both of their opinions when he asserted in Congress, referring to Muslims and Hindus, that “true freedom embraces the Mahometan and the Gentoo as well as the Christian religion.” In 1777, the Muslim kingdom of Morocco became the first country in the world to formally accept the United States as a sovereign nation. In 1786, when the United States needed protection from North African pirates who were stealing ships and enslaving crews, it signed the Treaty of Tripoli, which stated that “the government of the United States of America is not, in any sense, founded on the Christian religion, as it has in itself no character of enmity against the laws, religion or tranquillity of Musselmen.” In 1785, George Washington declared that he would welcome Muslim workers at Mount Vernon. In 1786, Jefferson triumphed in his Bill for Establishing Religious Freedom in Virginia, by persuading the Legislature to overwhelmingly reject attempts to include Jesus Christ as the religious authority in the bill. Jefferson later declared that this was one of his three greatest accomplishments.

Clearly, some of our founding fathers were very comfortable extending religious freedom to include Islam. They should have been. Islam didn’t just show up in America one day like an excited tourist. America imported it when we brought slaves over from Africa, an estimated 20 percent of whom were Muslim. This is not to suggest our colonial founders urged Islam’s spread. No one who follows a particular religion wants the competition to flourish. Tolerance is not the same as encouragement. Still, there was an inclusive spirit afoot in this bold, young country that would, in principle, make a Muslim feel safe and welcomed.

It’s safe to say America’s relationship with Islam has been headed downhill ever since.

Two new books about being Muslim in today’s volatile world — Omar Saif Ghobash’s “Letters to a Young Muslim” and Ali A. Rizvi’s “The Atheist Muslim: A Journey From Religion to Reason” — may help us return to those glory days when Americans weren’t so frightened and could see the world as more than just Us Versus Them. It’s an especially important task since our recent presidential election has justifiably left Muslim Americans feeling nervous, not just for their religious freedom, but for their physical safety. Hate speech and hate crimes against Muslim Americans have increased sharply. In early December, over 300 prominent Muslim American leaders sent an open letter to President-elect Trump asking him to reject some of his picks to join his administration because they have “a well-documented history of outright bigotry directed at Muslims or advocating that Muslims should not have the same rights as their fellow Americans.”

Ghobash’s “Letters to a Young Muslim” follows the literary tradition of a family elder passing down insights to a younger generation, specifically in this case, his two teenage sons, as well as other young Muslim women and men. Ta-Nehisi Coates used the same approach in his magnificent 2015 book “Between the World and Me,” which explores the multifaceted experience of being black in America. Coates’s work in turn took inspiration from “My Dungeon Shook: Letter to My Nephew on the One Hundredth Anniversary of Emancipation,” an essay by James Baldwin in his “The Fire Next Time.” A child who grows up a member of a disparaged group, one despised with fierce intensity, will eventually ask, “Why do they hate us so?” The literary device of answering that question directly both adds a dimension of heartfelt sincerity to the writing and shames those who have caused the question to be asked in the first place.

Ghobash is especially qualified to take on this task. Educated at Oxford University and the University of London, he is the United Arab Emirates’ ambassador to Russia. He also has a passion for the cultural power of literature, as demonstrated by his involvement with several literary awards, including the prestigious Man Booker Prize. That intelligence and focus illuminate his words. The compassion and humility his faith gives him is an inspiration to readers whether they are young followers of Islam looking for answers or curious non-Muslim readers looking to better understand the religion.

Ghobash is not an apologist for Islam because there is no need. He argues that reason and religion can coexist because we are meant to use our intelligence to reject manipulative and myopic interpretations of the scriptures. In essence, he is suggesting a compromise between blind faith and nibbling on the fruit of the Tree of Knowledge of Good and Evil. There are certain heavenly ordained teachings, but followers must be ever-vigilant that these not be perverted by people with personal or political ambitions. He writes: “I want my sons’ generation of Muslims to realize that they have the right to think and decide what is right and what is wrong, what is Islamic and what is peripheral to the faith. It is their burden to bear whatever decision they make.”

The most difficult subject for non-Muslims to understand is how peaceful Muslims can exist simultaneously with Muslim terrorists. This is the same problem Catholics, Protestants and Jews have had to grapple with throughout the centuries as adherents of each of those religions used violence to further some aim. Ghobash explains the differences among Muslims by describing Islam as a pyramid: “The fundamentalist, reductive, ‘authentic’ Muslims are at the top with the loudest voices and the clearest plan. So how is this going to affect you? Well, you need to begin thinking about how people use power in general and what they are using it for. It may seem a little early to have to think about these things, but there is a lot of power and influence at stake. And power tempts.” He warns the reader not to underestimate the influence of the small minority of extremists on the 70 percent of Muslims who are illiterate and the 100 million Arabs between the ages of 15 and 29, 28 percent of whom are unemployed.

In the end, Ghobash encourages the reader to accept a modern, enlightened path that embraces diversity, not just within Islam but among all religions: “If you begin to accept the individual diversity of your fellow Muslims, you are likely to do the same for those of other faiths as well.” It is this sort of wisdom that creates hope for a world in which people are smart enough to work together toward a common good rather than claw at one another while slowly sinking in quicksand.

The oncologic pathologist Ali A. Rizvi is in the unenviable position of being in the two religious groups that are, according to a 2014 Pew Research Center study, ranked lowest by Americans: atheists and Muslims. His book, “The Atheist Muslim: A Journey From Religion to Reason,” is just what the title promises: a close look at Rizvi’s journey from his Muslim upbringing to his rejection of Islam as well as all religion. The arguments presented are thoughtful, articulate, well documented, logical and made accessible by many personal anecdotes and pop culture references.

The American minister and author Norman Vincent Peale allegedly said, “The trouble with most of us is that we would rather be ruined by praise than saved by criticism.” This is especially true when someone is audacious enough to criticize religion. Rizvi clearly wants to save the world from the ravages of irrational thinking that excuses all sorts of violence and destruction. He approaches his subject with the kind of scientist’s rationality that ushered in the Age of Reason, yet he does so also with a passion for humanity that is inspiring. Most of Rizvi’s general arguments against religion are familiar, from Bertrand Russell’s famous essay “Why I Am Not a Christian” to the popular books by the contemporary atheists Christopher Hitchens and Richard Dawkins. However, his open personality and earnestness make this book so compelling that Rizvi may well become the Dawkins or Hitchens for the millennial generation.

Rizvi’s specific criticisms of the Muslim orthodoxy as stated in the Quran are surgically accurate. He cites various passages that are either contradictory or seemingly absurd in the modern world. But this is not a moving target. For centuries we have known that the holy books of most religions have the same weaknesses. The older they are, the more they are the product of their specific time and fraught with the misinformation of that era. Rizvi’s descriptions of historical sects of Islam and their conflicts with one another are especially illuminating. He concludes that a current disagreement “would never be an issue if its consequences weren’t so deadly. In effect, it is similar to two groups fighting about whether the green or the blue unicorn is the right one.”

How would a person of faith, like Ghobash, respond? Faith is the belief in something for which there is no conclusive evidence. To demand concrete proof of God’s existence contradicts the very notion of faith, which requires a person to examine their interior world rather than anything on the outside. But faith does not preclude logic. Choosing to demonstrate faith in humanity’s ultimate goodness, despite all the evidence to the contrary, allows us to embrace certain religious teachings. But it does not relieve us of the responsibility of choosing which teachings express that faith and dismissing those that do not. Both authors would agree to that. And that should give us all hope.

Kareem Abdul-Jabbar is a recipient of the Presidential Medal of Freedom and the N.B.A.’s all-time leading scorer. His book “Coach Wooden and Me” will be published in May.