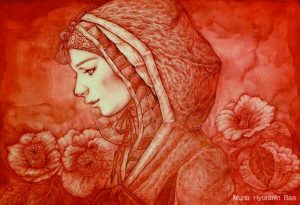 The relationship between Muslims and Koreans can be traced back to the 9th century and even earlier. Korea’s first contact with Muslims happened in the 7th century, when Arab and Persian traders and navigators came to Silla (one of the Three former Kingdoms of Korea) through Tang China (617-907). At that time, many travelers and traders traversed both land and sea from areas like Persia and other Islamic territories, who were mainly concerned with trading rather than spreading Islam. Some of them decided to settle in the Peninsula, becoming soldiers and government officials.

Although there aren’t any Korean sources from the Silla dynasty that refer to Muslims and Islam, there are references to Korea in some early world geographies by Muslim scholars as in Ibn Khurdadbih’s General Survey of Roads and Kingdoms, that was published in the mid-9th century. Afterwards, clay figurines and stone statues of Royal Guardians with distinctly Persian characteristics were discovered in Gyeongju, the old capital of Silla. But because there aren’t any Korean sources that mention these Muslims, it is assumed that they must have blended into Korean society very quickly. On the other hand, Arab accounts of Korea paint a very attractive picture of the Peninsula, richly endowed with gold and a very pleasant climate.

After the later Three Kingdoms of Korea, Silla, Hubaekje and Hugoguryeo were united and King Taejo Wang established the Goryeo dynasty, the Muslim presence reached a new height. In the 11th century, Arab traders sailed into Korean harbors on several occasions to engage in trade of rare ingredients needed for Chinese medicine prescriptions. In return, king Taejo Wang provided them with gold and cloth.

When the Mongol Yuan dynasty (1279-1368) took over Song China and all of China, the Eurasia land links were opened. As a result, Muslims started to travel by land rather than by sea. During this dynasty, many non-Mongols were employed. Some of them were Arabs, Persians, Central Asian Muslims, Turks and Uighurs. They helped them in running the empire, served in their army and got administrative posts. At that time, many Muslim officials from the Mongols were sent to Korea with the responsibility to check if the instructions given to the Goryeo dynasty were heeded. That caused many Muslim merchants to move and open up shops in Korea.

The rapid growth, however, came to an abrupt halt in 1427. During the Joseon dynasty – ruled by Sejong the Great – Korean Muslims were prohibited from performing Islamic rites and wearing traditional clothes. This in favor of what was the norm among the majority of the Koreans. The dynasty only maintained regular contact with China and Japan, but was isolated from the rest of the world. That is why this dynasty is sometimes labeled a “hermit kingdom”. Thus, in 1427, the contact of Korea with the Muslim world came to a halt.

The Muslim society expanded with 200 members within the first year. By the 1960s, the membership included 3,000 Korean Muslims. In 1967, the Korea Muslim Federation was established and the Korean Central Mosque opened in Itaewon, Seoul in 1976. The latter had sparked Korean society’s interest in the religion. A little year after the opening, 15,000 Korean Muslims were counted, and the number surged to 35,000, resulting in the establishment of 5 mosques in total by the year of 1990. Today, there are about 150,000 Muslims in Korea; an estimated 50,000 are natives born in Korea, and about 100,000 immigrant workers, students and businessmen from Pakistan, Bangladesh and Indonesia.

All over Korea, you can find halal options in a bunch of restaurants and grocery stores. The most popular area for Muslim foreigners in Seoul would be Itaewon. There’s even a muslim street, more than often jammed with Muslims and tourists.

They aren’t missing out in the educational field either; the first Islamic elementary school, Prince Sultan Bin Abdul Aziz Elementary School, opened in Seoul in 2009. It offers students the best Islamic education. The school is open for Korean Muslims, foreign Muslims and non-Muslim Korean children as a basis and is part of the Korean primar.