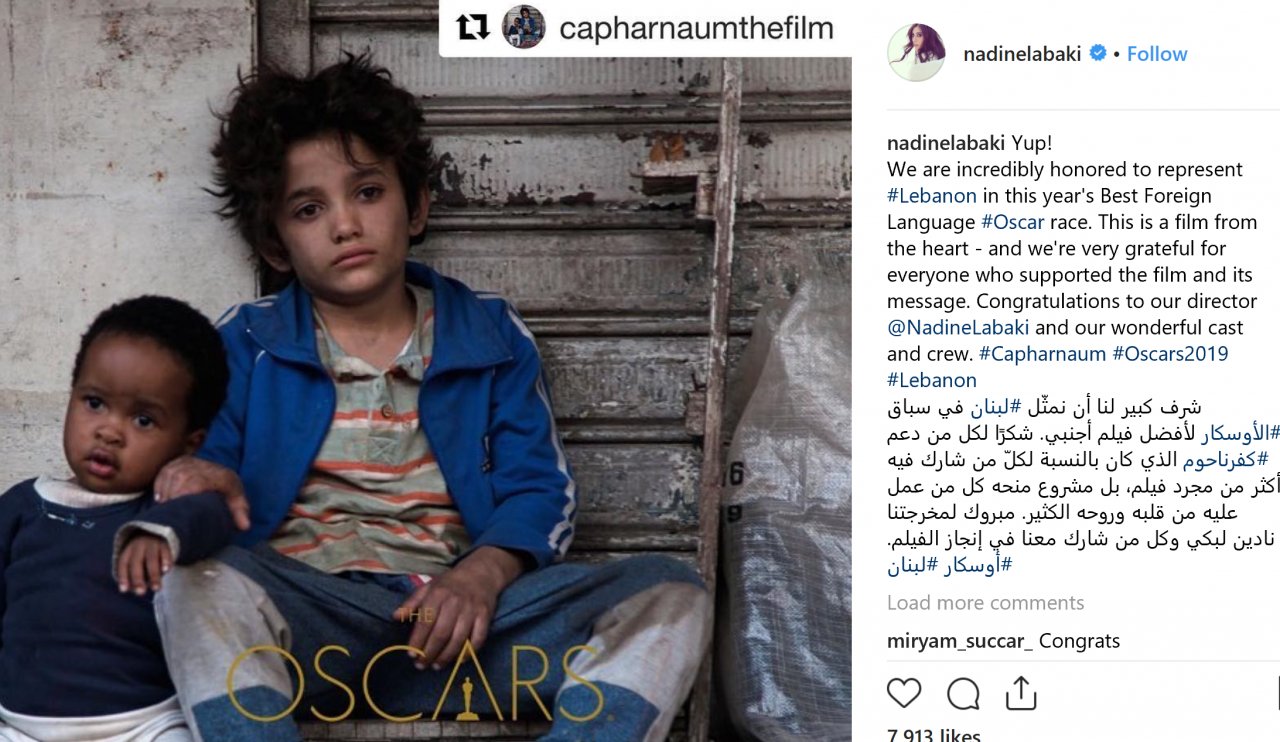 All it took her was a story, a vision, and a lens to transmit the darker reality of Beirut; a reality that hides behind the crowded shopping streets, historical settings, and vociferous nightlife of the capital.

The award-winning Lebanese director Nadine Labaki's newest movie “Capharnaüm” sheds light on the harsh actuality of the country’s marginalized groups. The new movie, which has officially debuted in Lebanese movie theaters a few days ago, has been chosen to represent Lebanon in the Oscars under the “Best Foreign Language Film” category.

The entry news was shared with Lebanese audiences, movie fans, and the world through the official social media account of “Capharnaüm” and that of Labaki.

“We are incredibly honored to represent Lebanon in this year’s Best Foreign Language Oscar race,” posted Labaki on her Instagram page. “We’re very grateful for everyone who supported the film and its message.”

The nomination will make “Capharnaüm” the second Lebanese movie to ever get selected to the Oscars after Ziad Doueiri’s movie “The Insult,” which was nominated in 2018. Nominees of 2019 are set to be released in January.

Over a period of 2 hours and 30 minutes, Labaki traces the journey of a 13-year-old boy named Zain who sues his parents for bringing him into a life of chaos and poverty. The movie’s cast was chosen to be non-professional actors but, people who have actually lived the life Labaki tries to transmit in her movie. Through the young boy’s struggles and voyage, the director set forth harsh messages echoing a reality that words might fail to describe.

“The movie is absolutely heartbreaking simply because of how real it is,” said Hiba Chehab, a locale who has seen the movie right after its release. “Not for a second can you tell that the characters are acting because they definitely are not.”

Beyond the echoing success of the movie in the minds of those who have seen it and those who have yet to watch it, “Capharnaüm” left a huge mark in the movie’s main actor Zain Al Rafeaa. Al Rafeaa is a young charismatic Syrian refugee that caught the attention of Labaki before casting him and then accepting him as the main actor of her movie.

“When I saw Zain, it was very obvious to me that he was going to be our hero,” reported Labaki to the UNHCR adding that his awareness of the movie’s topic and his sad reality made him perfect for the role.

The movie built the first blocks of a life-changing event for Zain and his family.