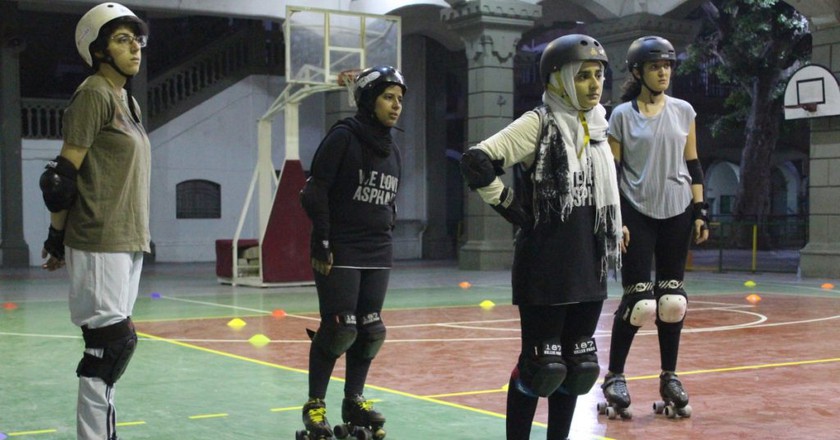 Having moved from Denmark to intern with GAME in January 2015, an organization which encourages street sports, Elisabeth Wolfhechel started Roller Derby Beirut. A player herself, she saw the importance of encouraging the sport in the city. The team started as one of the GAME’s initiatives wherein weekly sessions of several street sports are conducted at different venues in Lebanon.

Wolfhechel was beyond dedicated to the cause as roller derby equipment is not sold in Lebanon. She would accumulate donations from across the world and even went as far as setting up a donation stand in the 2014 Roller Derby World Cup. To this day the team depends on donations of extra equipment.

In comes Nada Ben Jemaa, the current team manager of Roller Derby Beirut and a student at the American University of Beirut (AUB). Having recently moved to Beirut herself, she wondered whether there was a team and came upon Roller Derby’ Beirut’s Facebook page. Elisabeth answered and the rest was history.

All the team members seem to operate almost like a family, with nicknames given to each member. Some this nicknames are Shiny Tiny, Resting Kickface, and Lazy Cake. This closeness was achieved even though the members hail from UAE, Bahrain, Yemen, Tunisia, Egypt, and Beirut. The girls join together once a week for two hours in Gemmayze, a district in Beirut, to practice and just have plain fun!

That is not without a message, as all the girls have a can-do attitude and a feminist drive to boot. Being pioneered by women, the team is inadvertently a testament to these girls’ success at female empowerment. They also spread a message of diversity and acceptance as the members themselves are a pretty diverse bunch. A lot of the members never even expected to find an escape in Roller Derby.

On their way to professionalism, it hit them that they were the first to achieve this feat. The team has also helped them feel a bit less homesick especially with members who come from politically unsettled countries. It has also provided an outlet for the girls’ frustrations and helps them laugh. In a video interview with Huck Magazine, member Hadeel Al- Hubaishi A.K.A Shiny Tiny shed light on her struggle being away from home at a time of unrest for Yemen and how the team had helped her. This shows how important these small activities could be to people in Beirut. The team is not only a step forward in Beirut’s growth as a city but also a huge leap in female empowerment as these girls constantly prove that women can do anything.