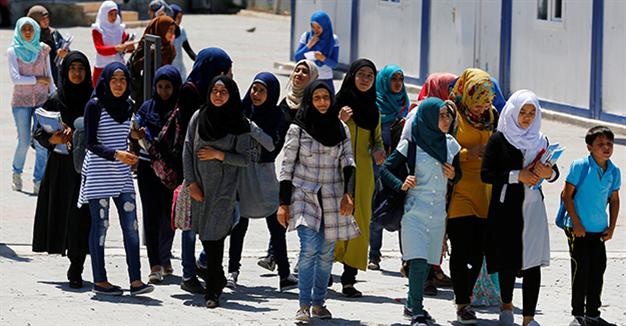 Syrian refugee school children walk to their classes at a refugee camp in Osmaniye, Turkey, May 17, 2016. REUTERS photo

Only 170,000 of 625,000 school-aged Syrian children living in Turkey are receiving formal education at Temporary Education Centers (GEM) inside and outside refugee camps, according to the Education Ministry.
Education Minister İsmet Yılmaz provided information on the education situation of Syrian refugee children upon a parliamentary question by main opposition Republican People’s Party (CHP) Istanbul deputy İlhan Cihaner.

There are currently estimated to be 1 million children among the around 3 million Syrians hosted in Turkey, 625,000 of whom are of school age.

Over 170,000 Syrian students, ranging from pre-school to 12th grade, are enrolled in these centers and the ministry has begun technical work for an electronic information sharing system for those who want to get more detailed information on the issue, Yılmaz stated.

Upon a question on the role that the Directorate of Religious Affairs’ (Diyanet) Diyanet Foundation (TDV) plays in the selection of teachers for these students, Yılmaz said the foundation, together with the ministry, supported 15 of the GEMs in line with protocols approved by local governors. He added that the TDV had not played any role regarding teacher selection, other than providing translation support when necessary.