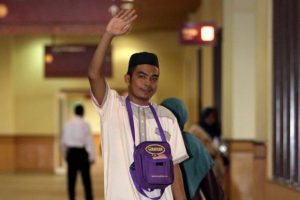 20-year-old Muhammad Ramadhan Alias from Malaysia, a final-stage leukemia patient was told he had just months to live. His final wish was to visit the two holy cities of Makkah and Madinah so he set off for Madinah first and planned to perform Umrah in Makkah thereafter.

However, he was unexpectedly rushed to the Al-Ansar Hospital in Madinah where he passed away. He was buried in the Al-Baqi cemetery next to the Prophet’s Mosque (peace and blessings be upon him).

Muhammad’s sister Maryam told Malaysia’s The Star that the family were saddened to hear the news but at the same time they were happy that he died in the blessed city of Madinah:

“But at the same time we are happy for two reasons, one is that he had his wish fulfilled and the other is that we believe only the lucky ones die in the holy land and he is one of the lucky and chosen ones”.

Muhammad’s father will be travelling to Makkah to fulfill the Umrah on his son’s behalf and will then travel to Madinah to visit his son’s grave.

May Allah grant us all death in the city of the messenger (peace and blessings be upon him).