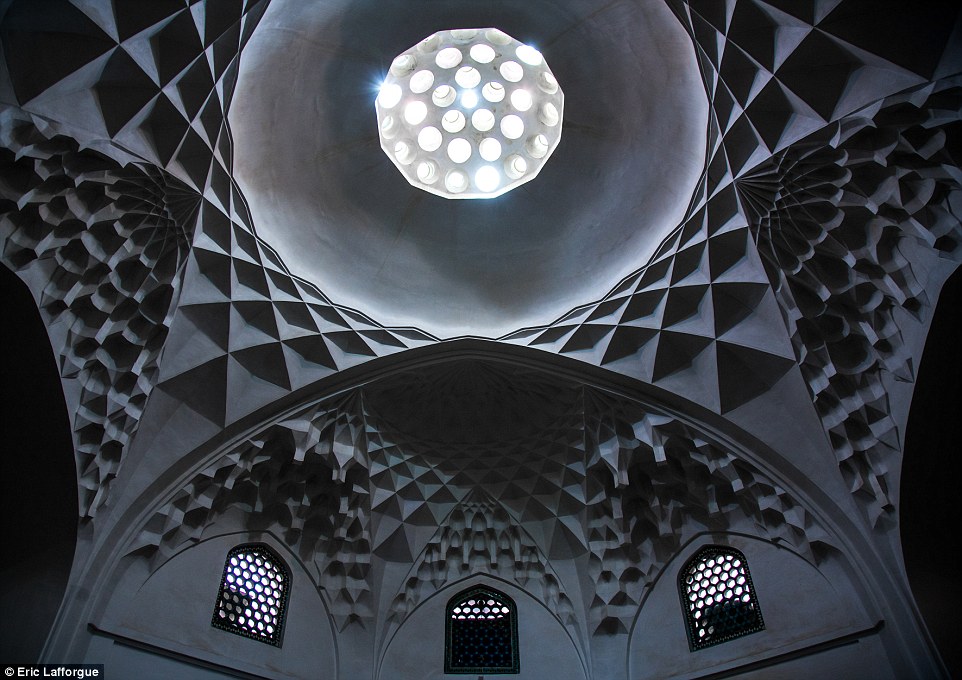 The town of Kashan, halfway to Isfahan from Tehran, hosts the best historical houses, including the 18th century Abbasian Historical House, which features this ceiling

By Caroline Mcguire for The Daily Mail

For the past few decades, restrictions on travel to Iran has meant the country has been largely shut off from the Western world, but as visa sanctions are lifted in the light of a landmark nuclear deal, the local tourism industry is hoping for a flurry of visitors.

It's not hard to see why Iran is listed as one of the top travel destinations of 2016, with its rich culture and history.

Among the standout aspects of the nation is its beautiful ancient architecture, with the cities and towns littered with ornate and eye-catching mosques, public baths and markets.

And unlike many other countries - the roof is not an afterthought, with many ceilings built as the centrepiece to the building, with many of the tile designs showcasing a display of intricate geometric patterns that date back several centuries.

Here are the results of his incredible photo series, which has been titled Head Up In Iran.

The town of Kashan, halfway to Isfahan from Tehran, hosts the best historical houses, including the 18th century Abbasian Historical House, which features this ceiling 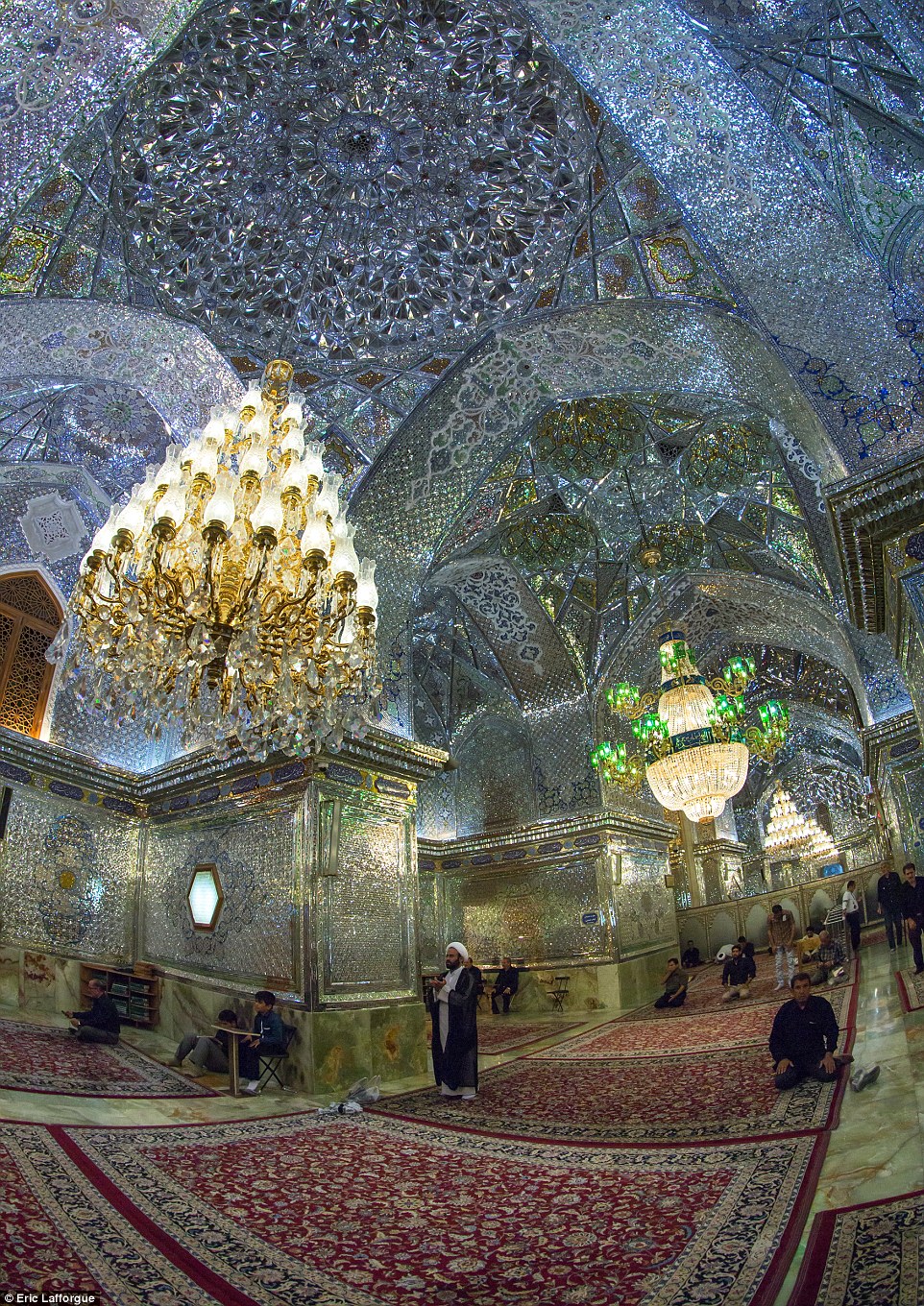 The Muslim Shiite People Hall Of The Shah-e-cheragh Mausoleum in Shiraz. Shah-e-Cheragh is a funerary monument and mosque where the tomb of Amir Ahmad and his brother Mir Muhammad, sons of the seventh Imam and brothers of Imam Reza, lie. Lafforgue said: 'It is not always possible to enter the place, it depends on the mood of the guards. The whole ceiling its covered with pieces of dazzling glass intermixed with multi-coloured tiles, interspersed with glass. The marble floor and Iranian carpets are reflected in the mirrors' 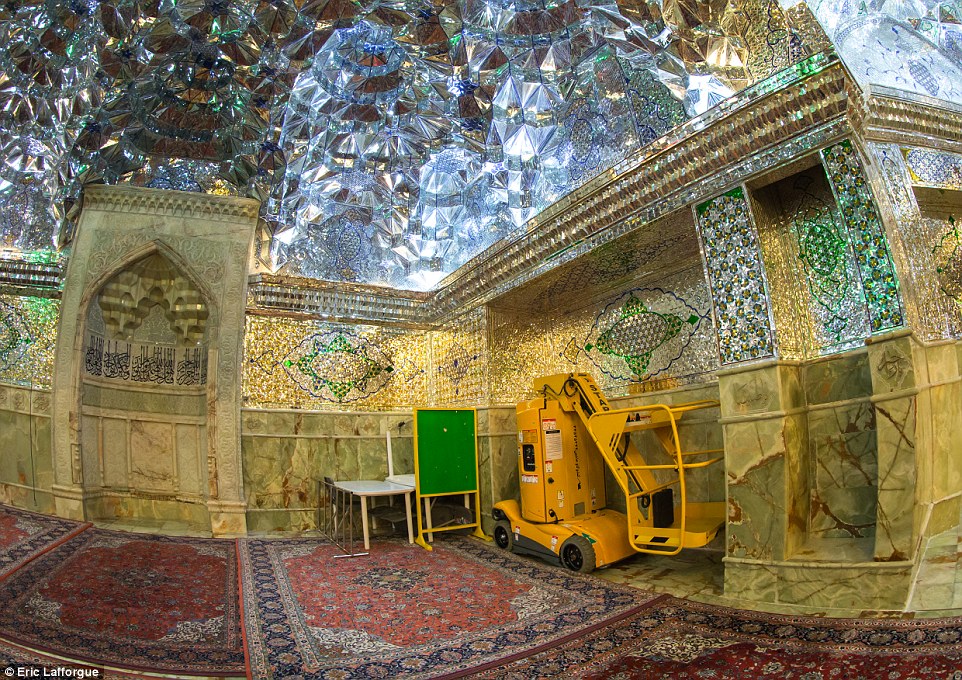 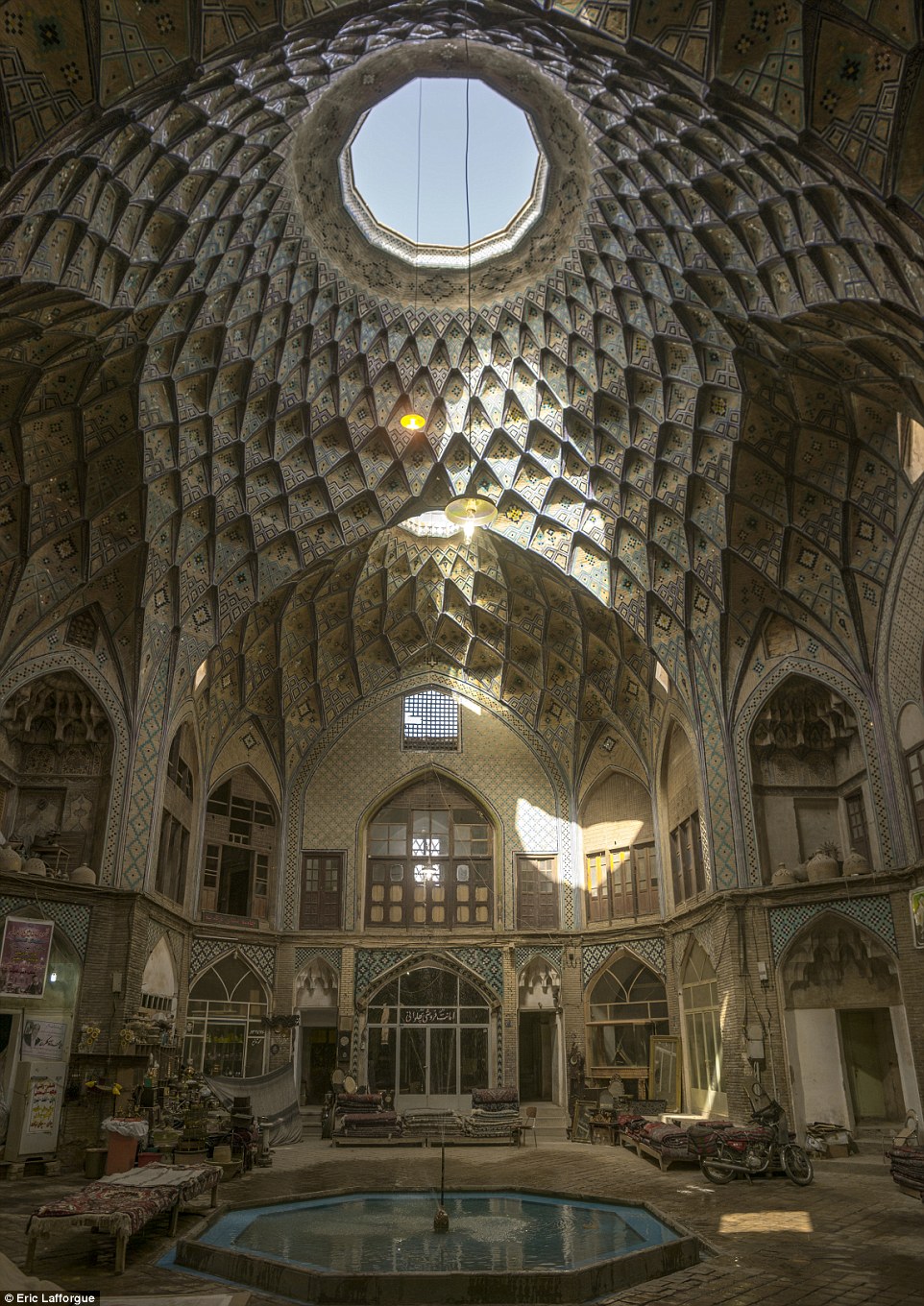 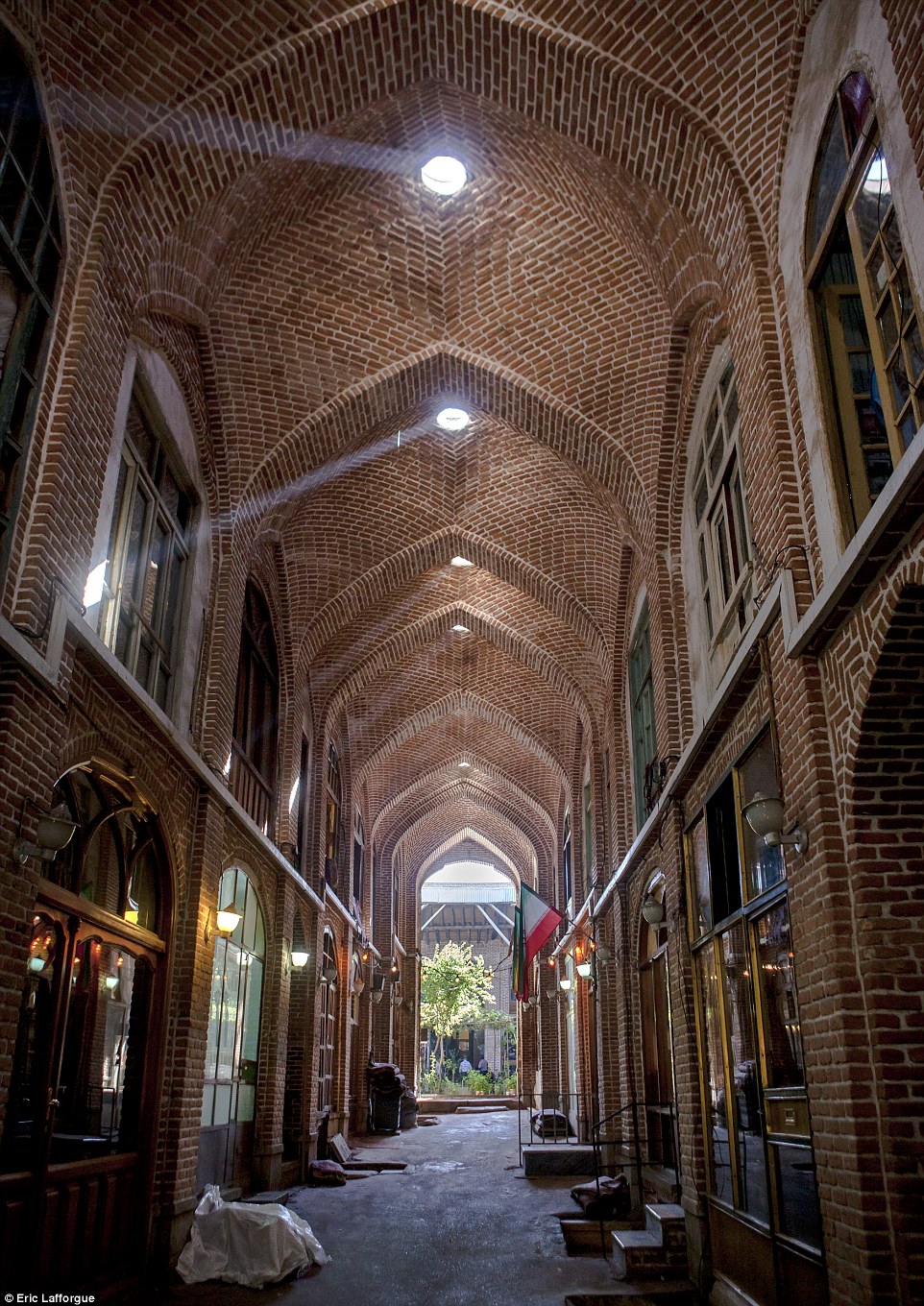 Rays of light inside the Old Bazaar, Tabriz. It is one of the oldest bazaars in the Middle East and the largest covered bazaar in the world 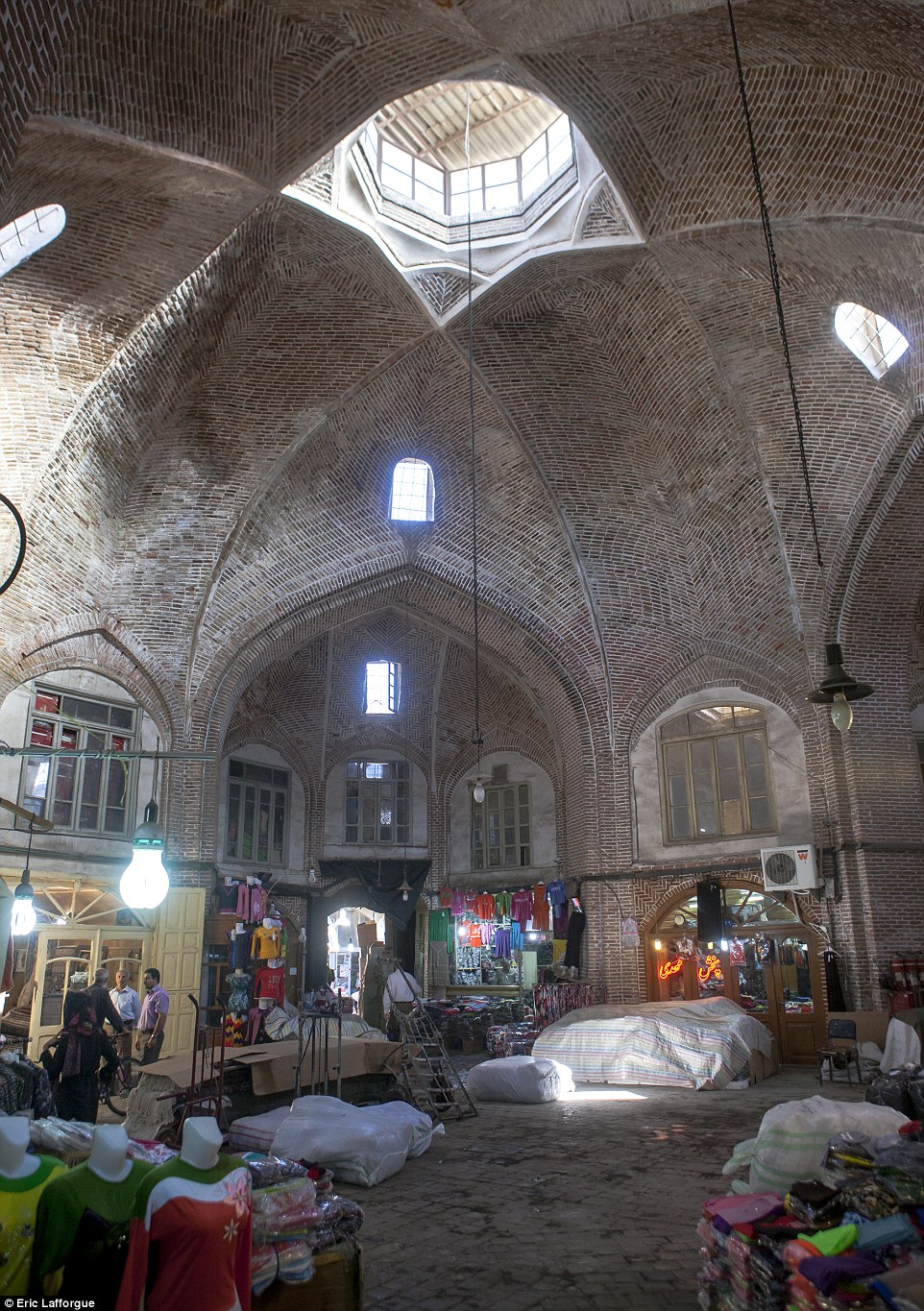 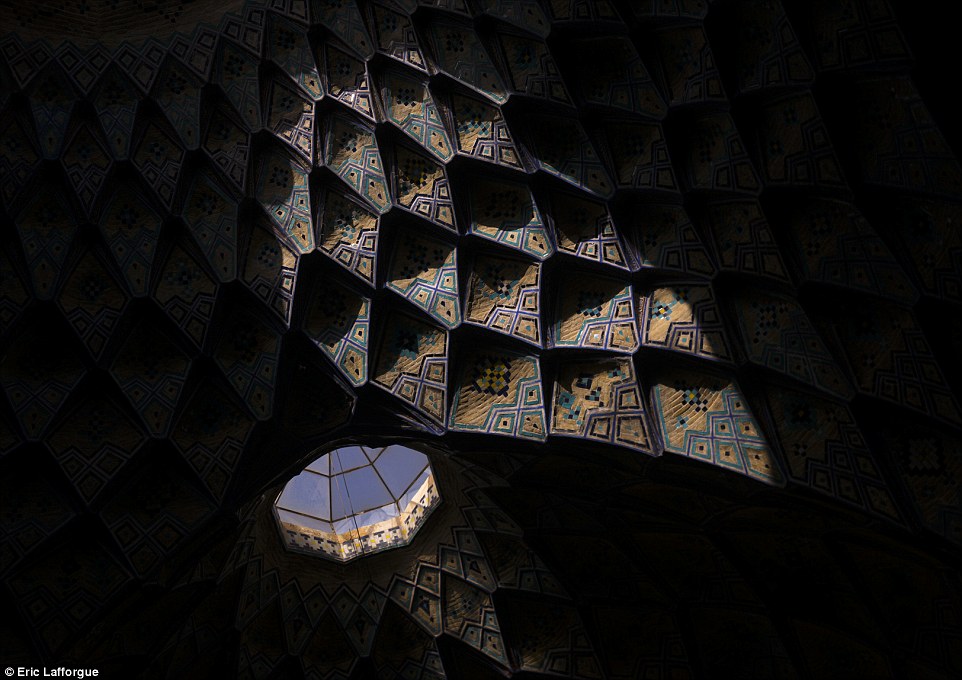 The dome of Timche Ye Amin Al Dowleh Caravanserai In the bazaar in Kashan. The bazaar is still in use and is a few miles in length 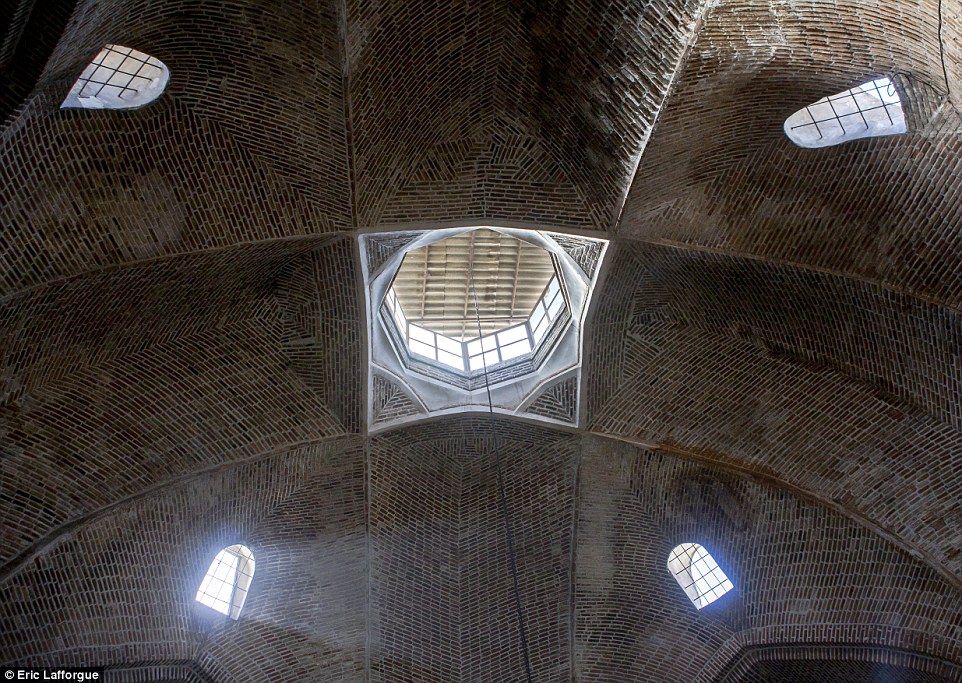 The ceiling in The Old Bazaar in Tabriz, which is a maze of roofed brick buildings and enclosed areas that consist of several sub-bazaars 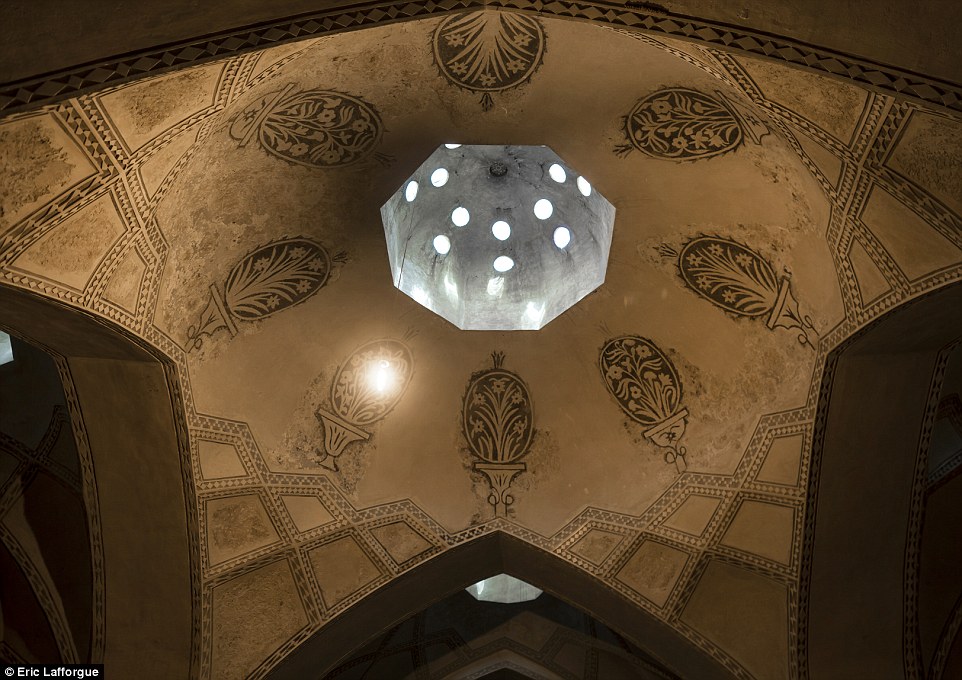 The ceiling in Hamman-e Vakil Bath Isfahan. Vakil Bath is an old public bath in Shiraz, that was constructed in the mid-1700s 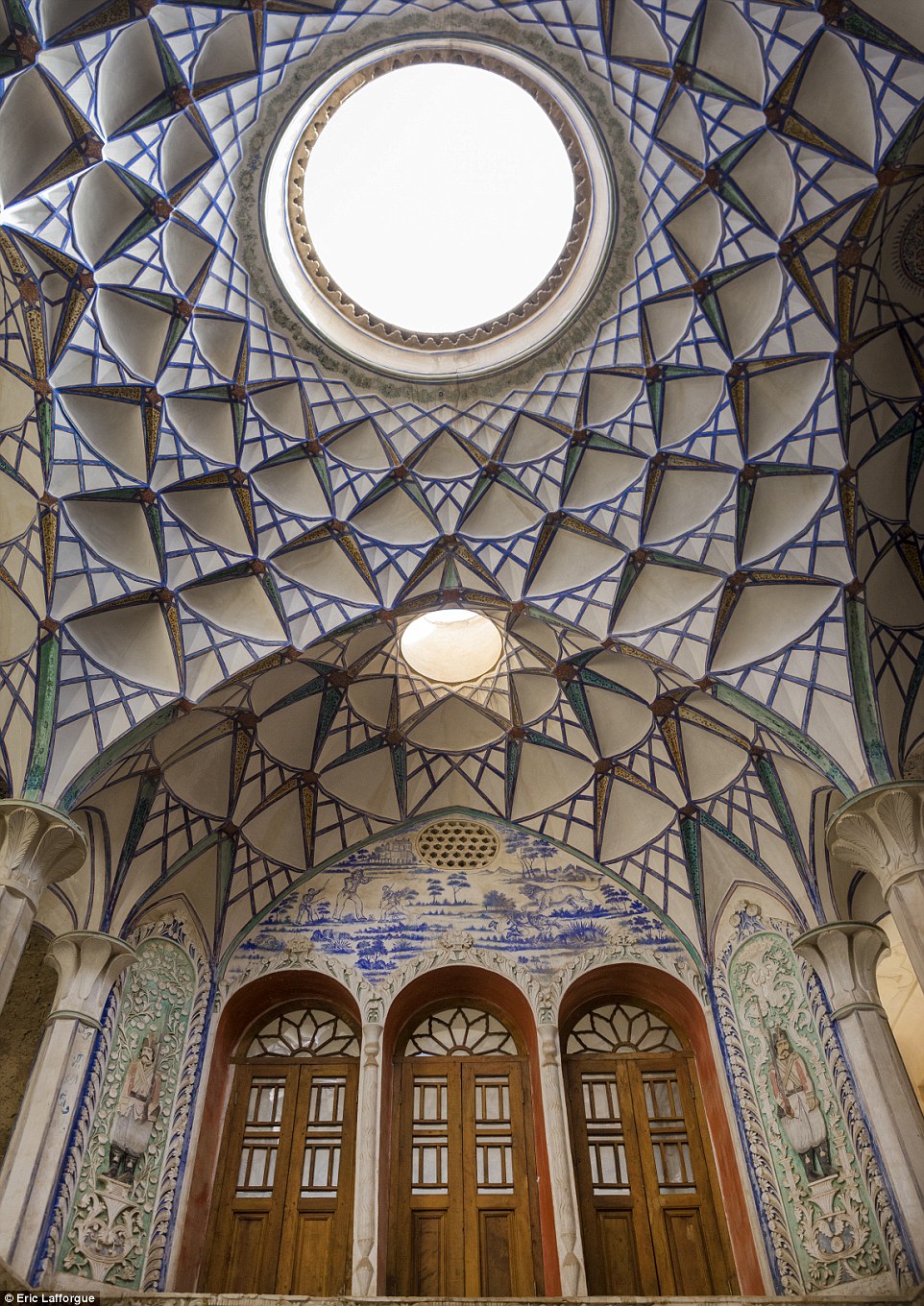 The ceiling in the Sultan Amir Ahmad Bathhouse, a traditional Iranian public bathhouse in Kashan that was constructed in the 16th century 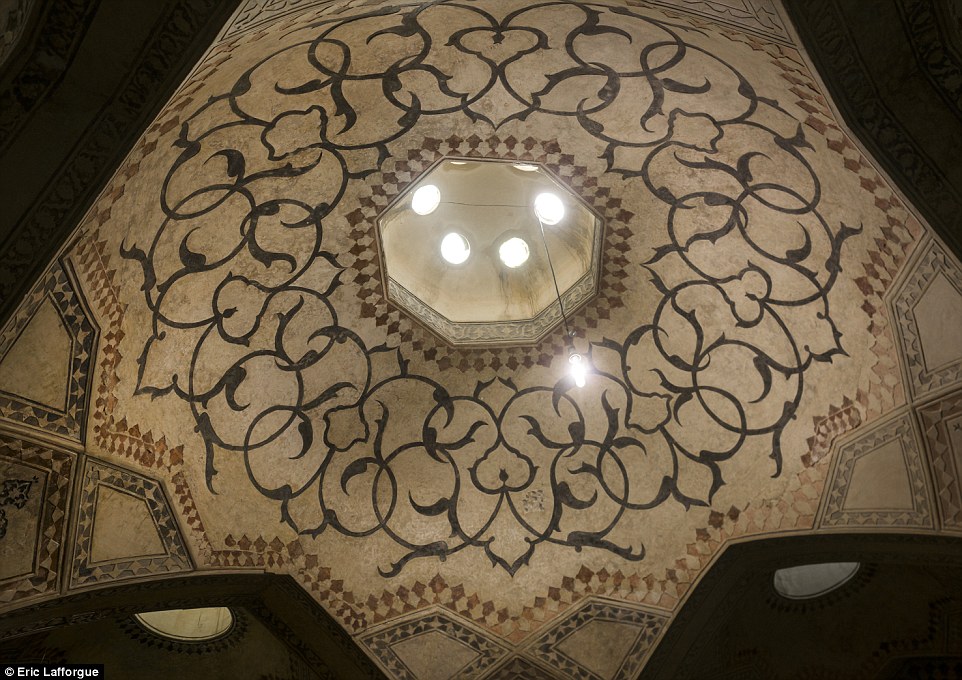 The Karim Khan Fort is a citadel located in downtown Shiraz, and inside the castle is a public bath house with this tiled ceiling 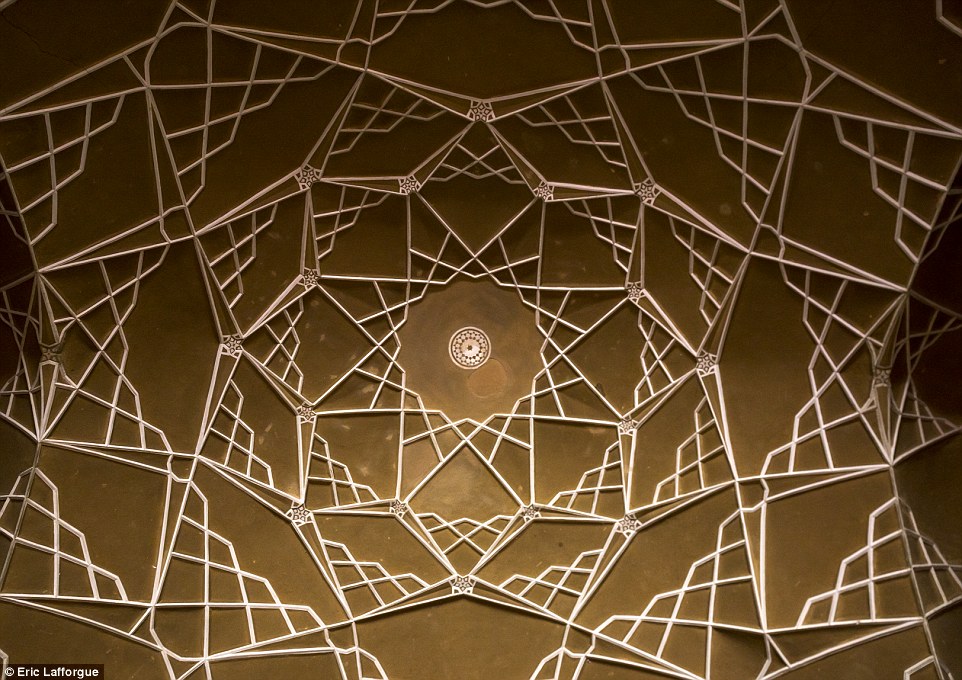 One of the ceilings inside the Abbasi House - a large traditional historical house located in Kashan, Isfahan Province, that was built during the late 18th century 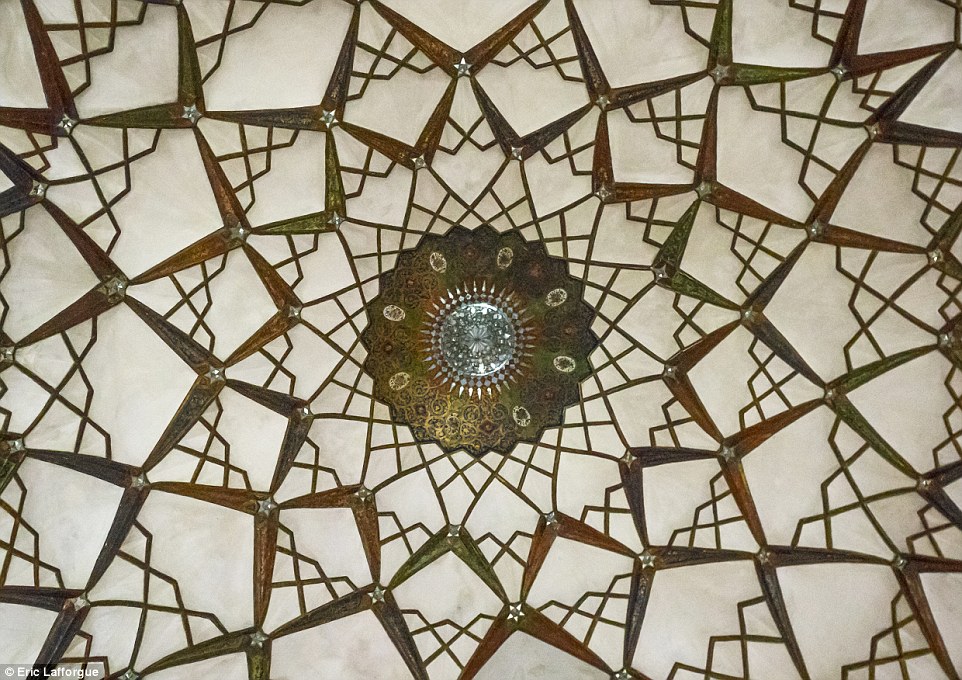 A ceiling in Tabatabaei Historical House built in 1880, Kashan. The picture shows how heavily mathematics and geometry featured in Islamic architecture 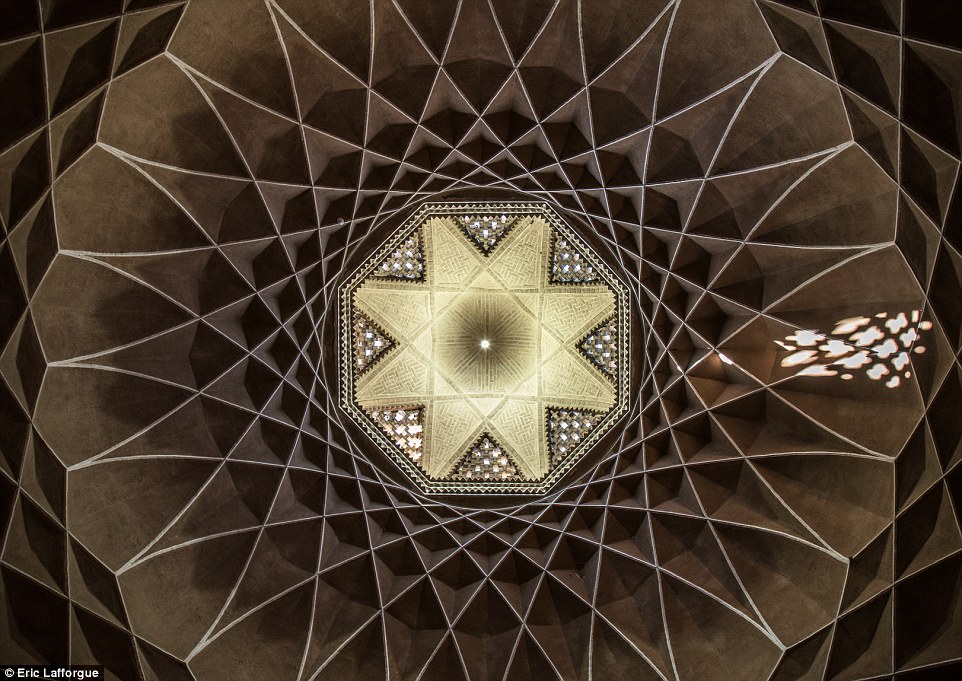 This ceiling in the Dolatabad Garden, Yazd, is part of a huge wind catcher, which was the traditional air con in this arid area 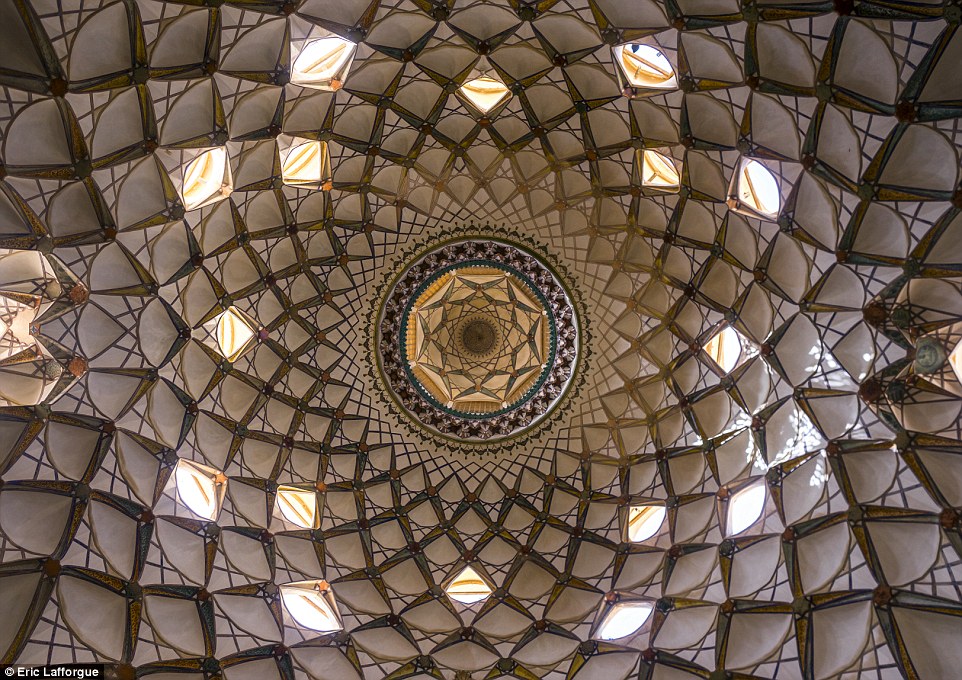 This ceiling in the Borujerdi House, a historic house in Kashan, was built in 1857. It took 18 years to build the masterpiece 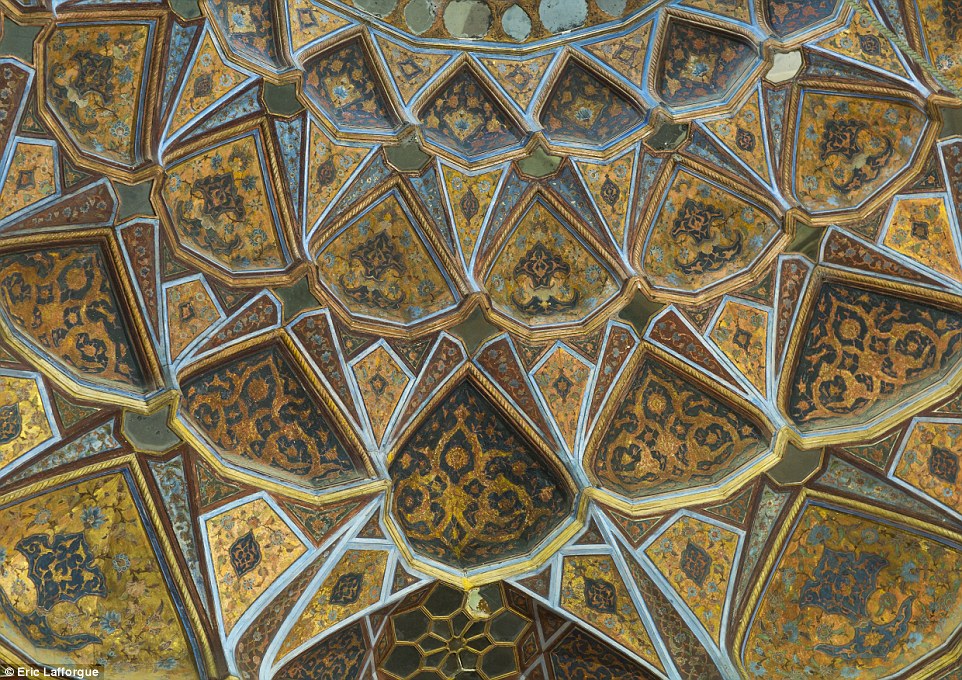 This painted ceiling can be found inside Behesht Palace, Isfahan. The work of art was built in 1669 and it is the only one of this kind left in Iran 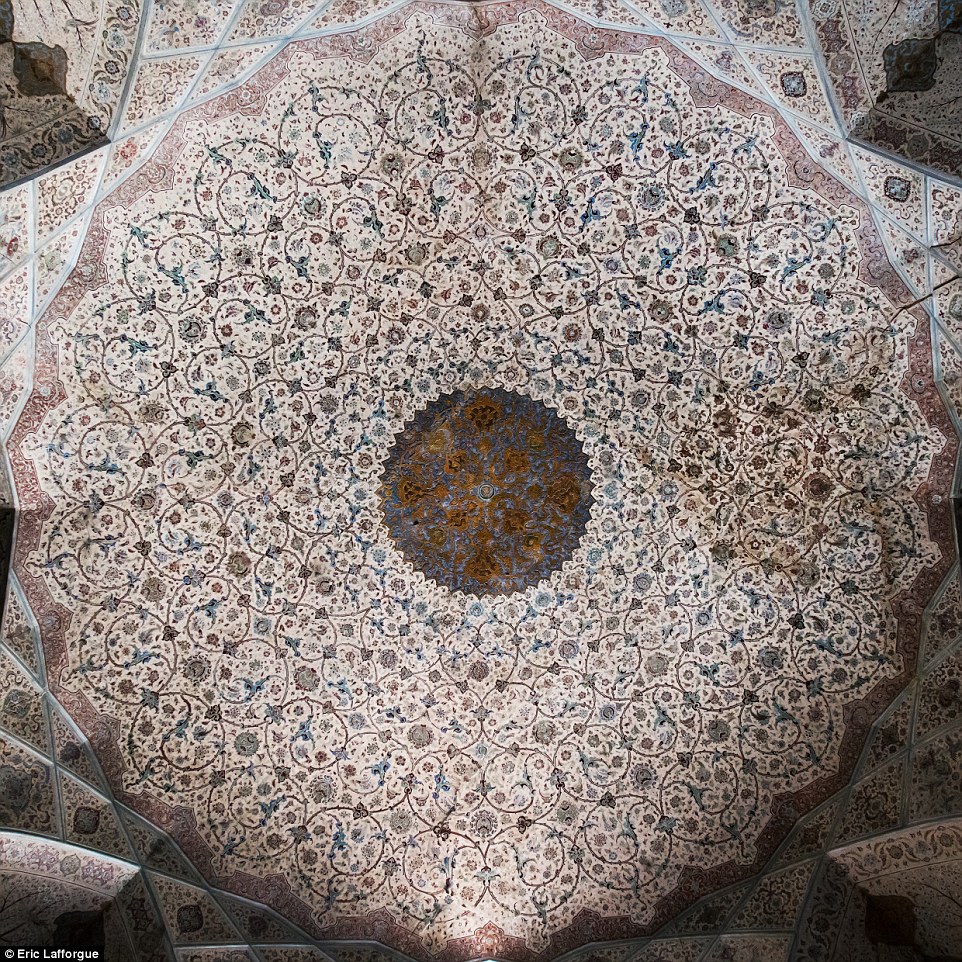 This ceiling in Ali Qapu, a grand palace in Isfahan, has been restored and repaired by Iranian and Italian artists and masters 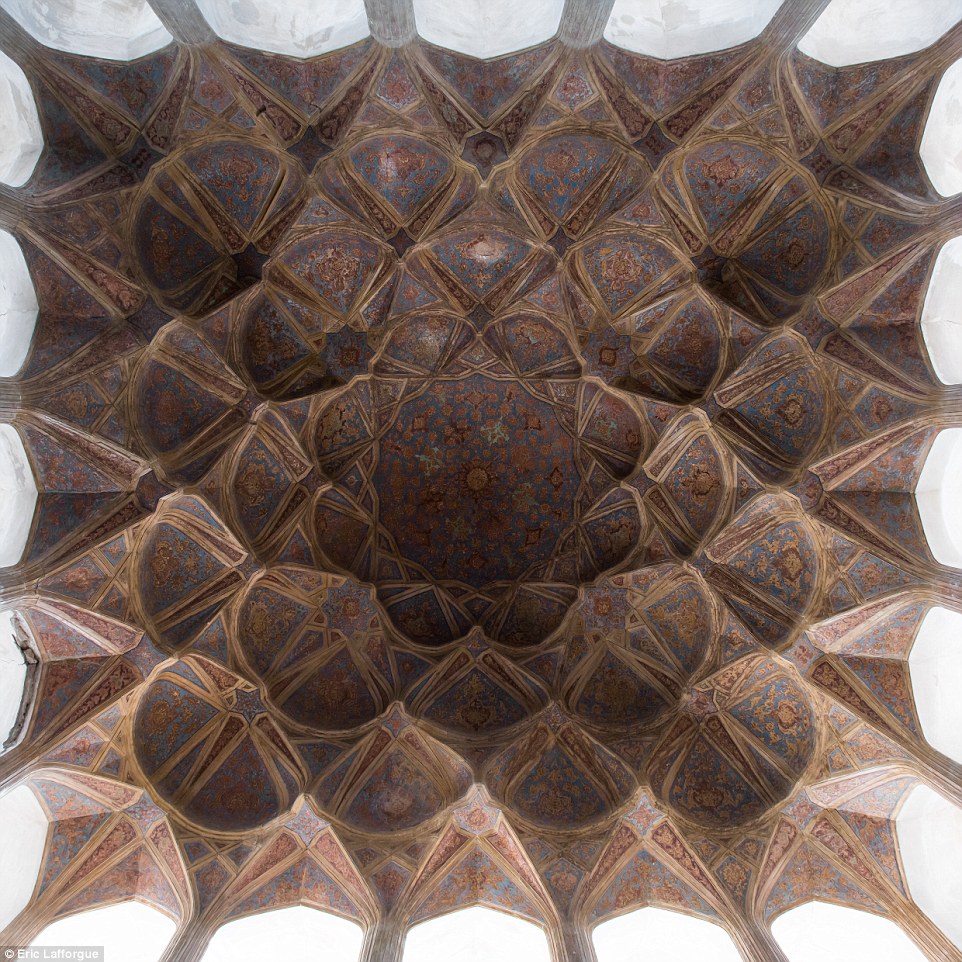 Pictured is the famous acoustic ceiling in the music room of Ali Qapu palace. The palace is depicted on the reverse of the Iranian 20,000 rials banknote 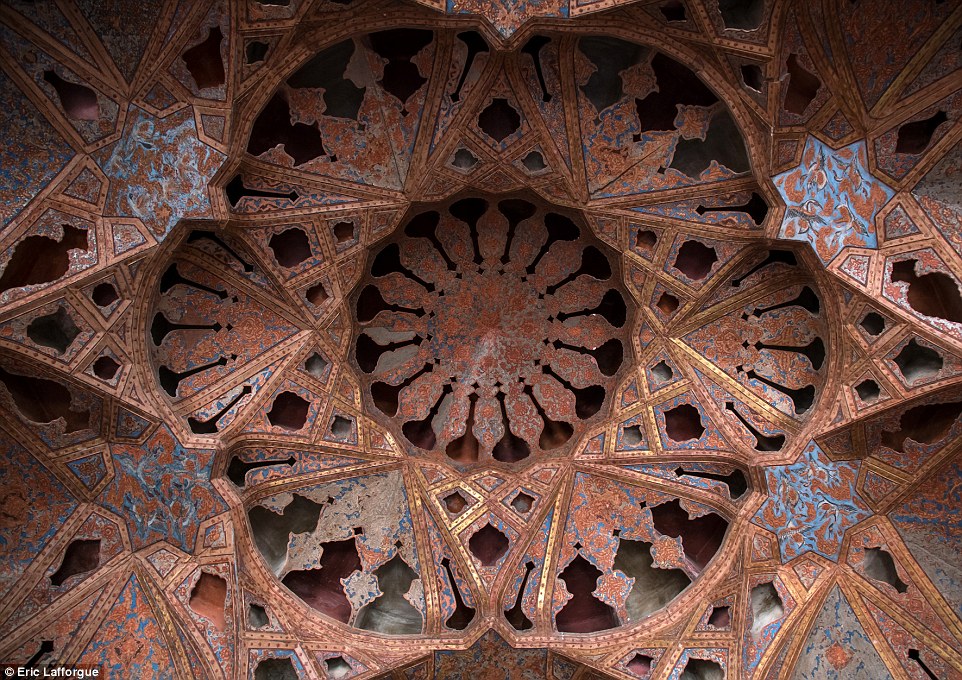 The acoustic ceiling in the music room of Ali Qapu palace. The 3D design was perfect for intimate music, especially Iranian ballad, which was part of Iranian traditional music performed in the 1600s, when it was built 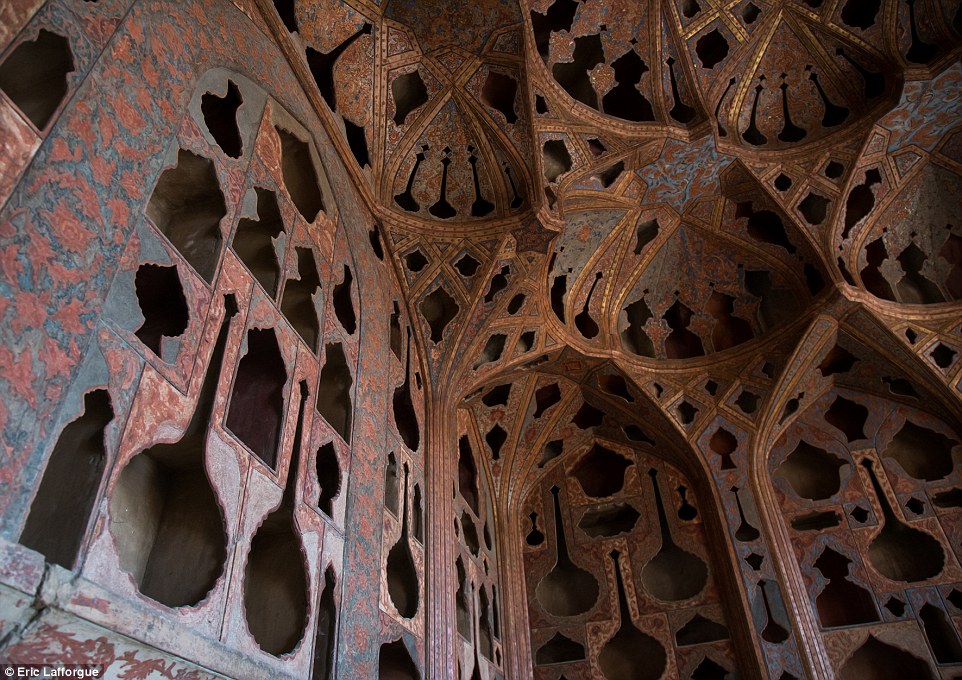 The ceiling in the music room at the top of of Ali Qapu palace has cut-out stucco decorations of vases and goblets, which served to enhance the sound of music played for the king 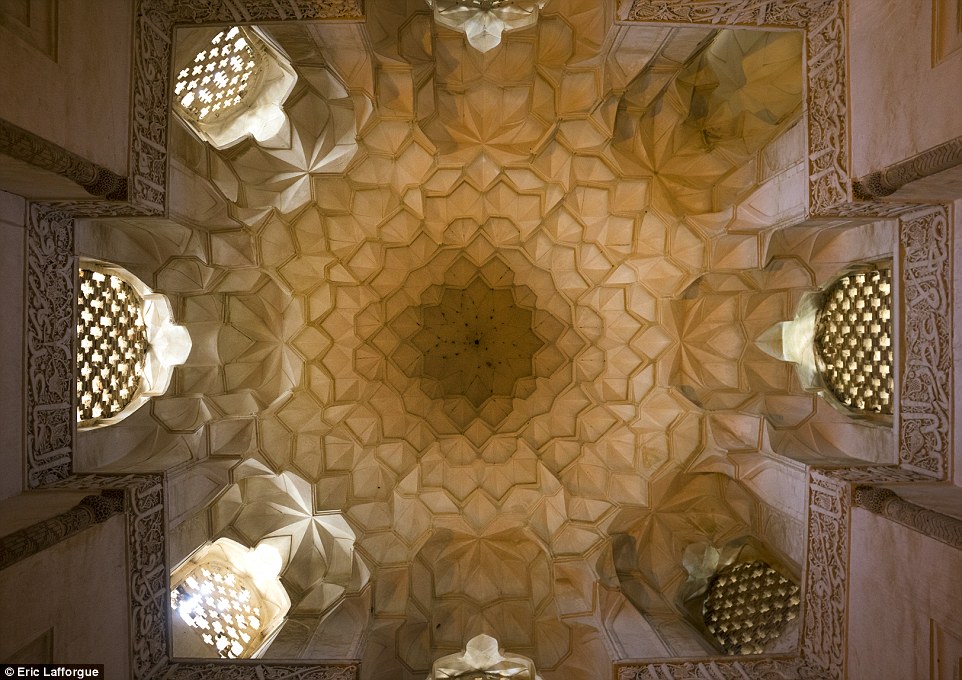 The ceiling in Jameh Mosque, Natanz. The mosque is one of the best-preserved of all Ilkhanid-era buildings 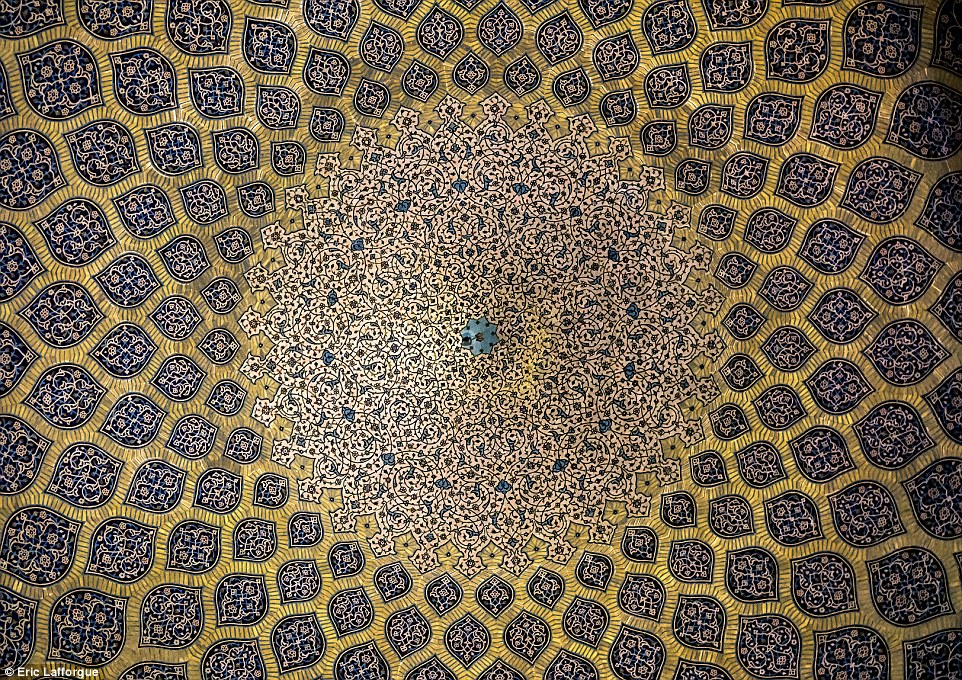 The ceiling of the dome in Sheikh Lotfollah Mosque. The construction of the ceiling started in 1603 and the decoration seems to lead the eye upwards toward its centre, as the rings of ornamental bands filled with Arabesque patterns become smaller and smaller 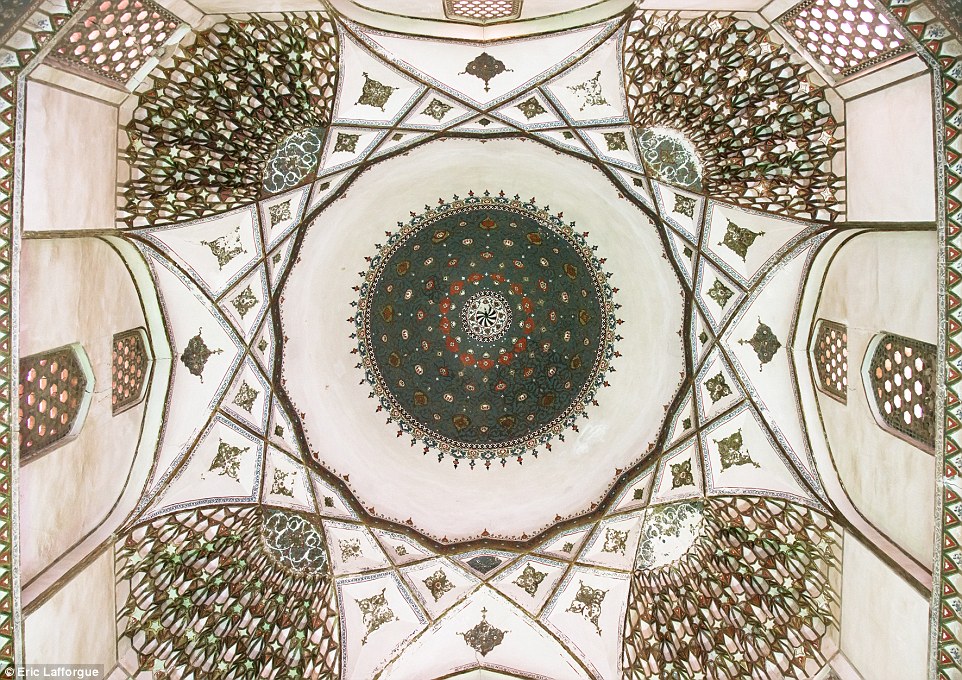 The ceiling in Three Domes Moshtaghie Mosque, Kerman. Lafforgue said: 'Many specialists think the most exquisite and delicate architecture ever created by mankind can be found in Iran. Each mosque has diverse styles of tile work, unique colors and symbolic designs' 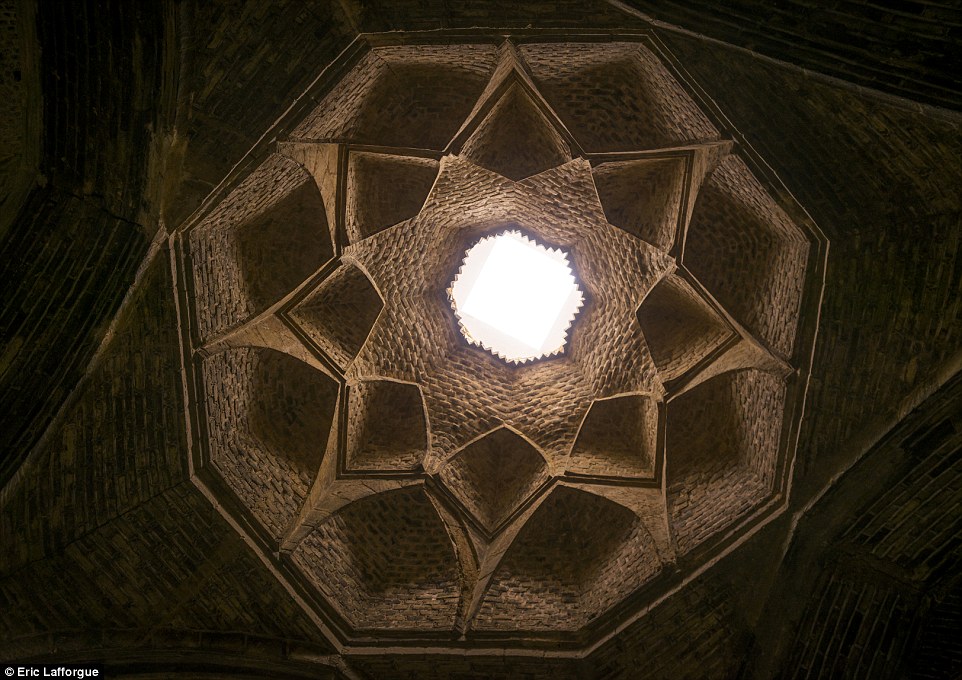 The ceiling In Friday Mosque, located in Isfahan, 211 miles south of Tehran. The mosque is typical architectural expression from the Seljuk rule in Persia 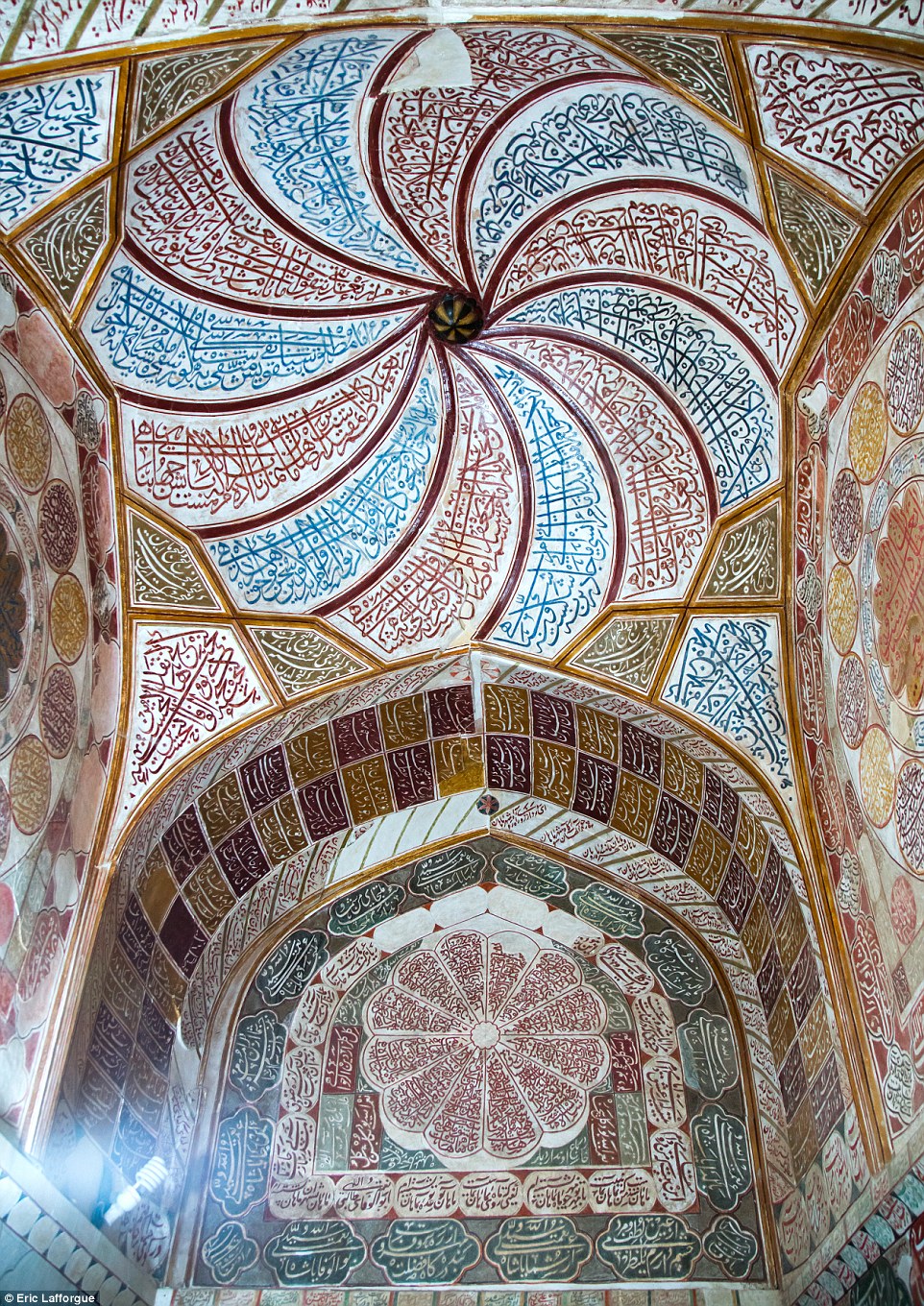 This image shows elaborate decorations of the meditation room of the tomb of the Shah Nematollah Vali Shrine, located in Mahan. Lafforgue said: 'This kind of ceiling decoration is not common, as the ceiling has been filled with Quran verses and prayers. The calligraphy is linked to geometry as the proportions of the letters are all governed by mathematics' 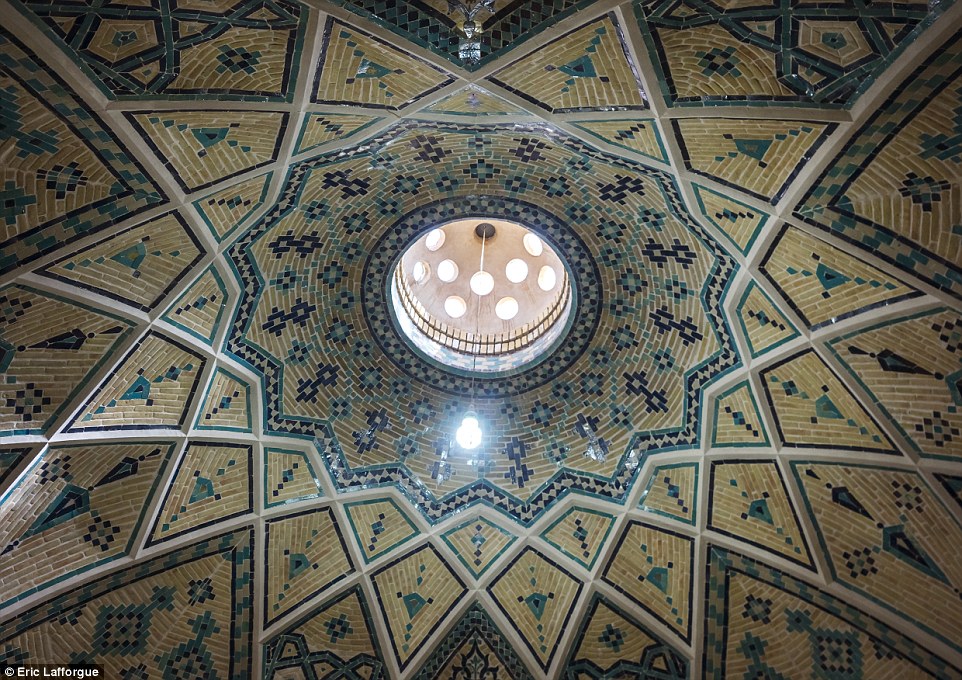 The ceiling In Sultan Amir Ahmad Bathhouse, Kashan. Also known as the Qasemi Bathhouse, the building is a traditional Iranian public bathhouse that was constructed in the 16th century 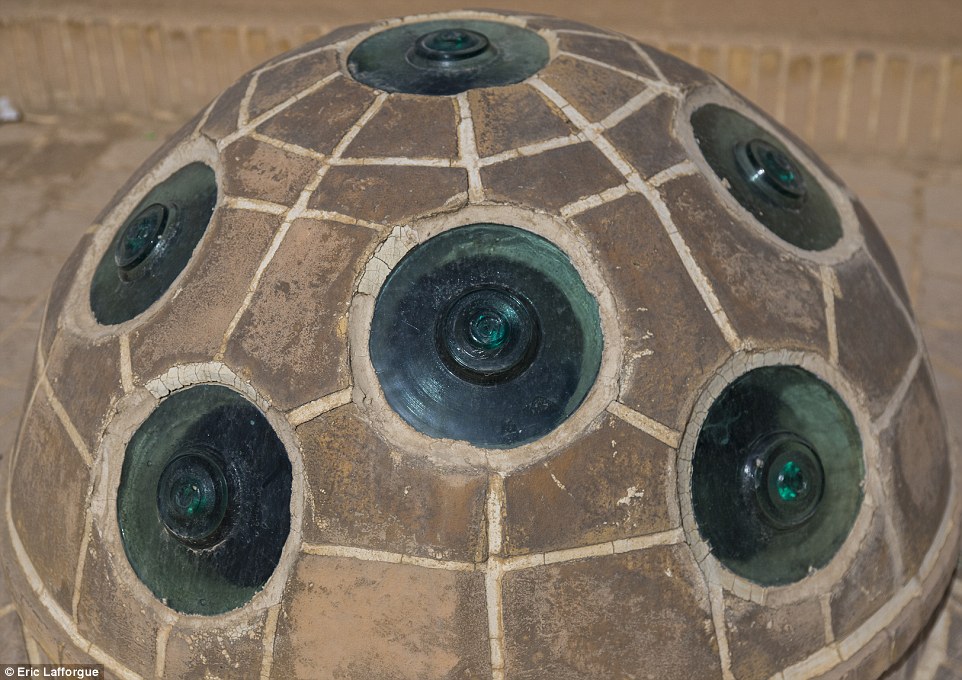 The Sultan Amir Ahmad Bathhouse roof. Larrorgue said: 'They started to use ground glass when they saw that children were going on the roofs to watch the women having baths' 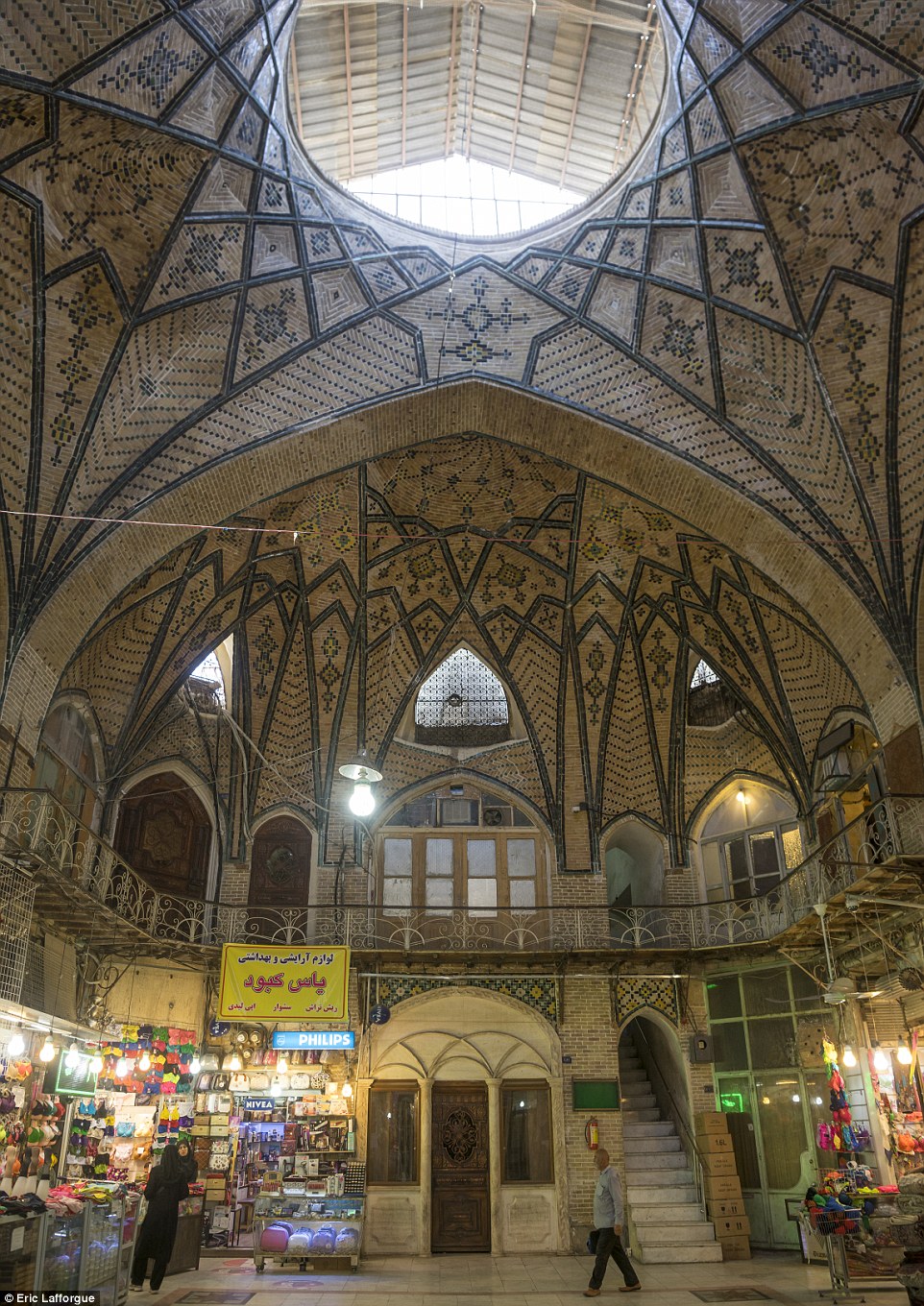 The Grand Bazaar Tehran is an old historical market in the capital that is split into several corridors over six miles in length, each specialising in different types of goods 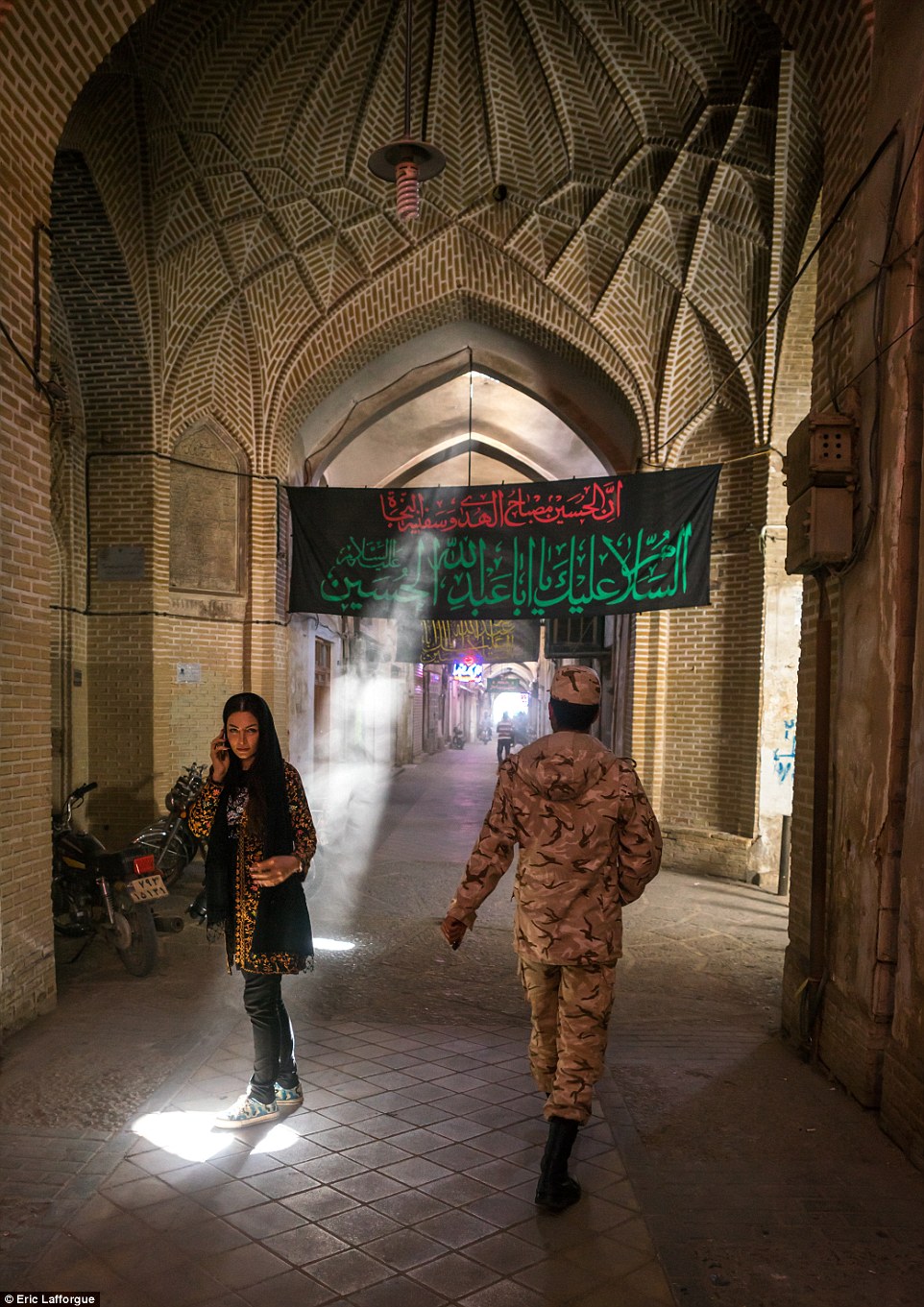 A woman and a soldier pass by each other in the bazaar in Yard, which is one of the oldest historical places in the central Iranian town