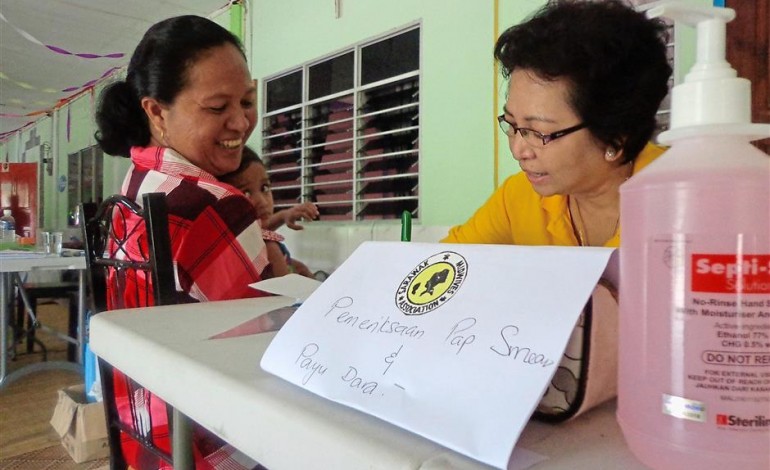 The longhouse is a modern one – double-storeyed, built with bricks and concrete, equipped with running water and electricity.

There is a primary school nearby, as well as a small Klinik Kesihatan (public health clinic) manned by a medical assistant, with a doctor swinging by every month or so.

The Iban inhabitants are prima- rily pepper farmers, and earn a decent living in general.

However, like many interior areas in Malaysia, access to this community, Rumah Entalau in Nanga Entalau, Lubok Antu, Sri Aman, Sarawak, is difficult.

There is extremely limited mobile phone coverage in the area – none at all in many places – and the only road in is a so-called jalan balak (logging road), made by timber companies to access their sources of wood, and now maintained by the government.

The first several kilometres of this road from the main (tarred) one is covered with loose gravel; the rest is just dirt.

It hugs the sides of the hills, often with deep ravines dropping off to one side with only the flimsiest of metal barriers as protection between vehicle and a fatal plunge.

It also winds up and down, frequently at steep 30°-45° slopes, with plenty of sharp turns that have no line of sight for oncoming traffic.

One needs both a four-wheel drive (4WD) and experience to safely traverse this road, as evidenced by the fact that all three of our group’s 4WDs, driven by town locals unused to such terrain, broke down at various times during our journey. 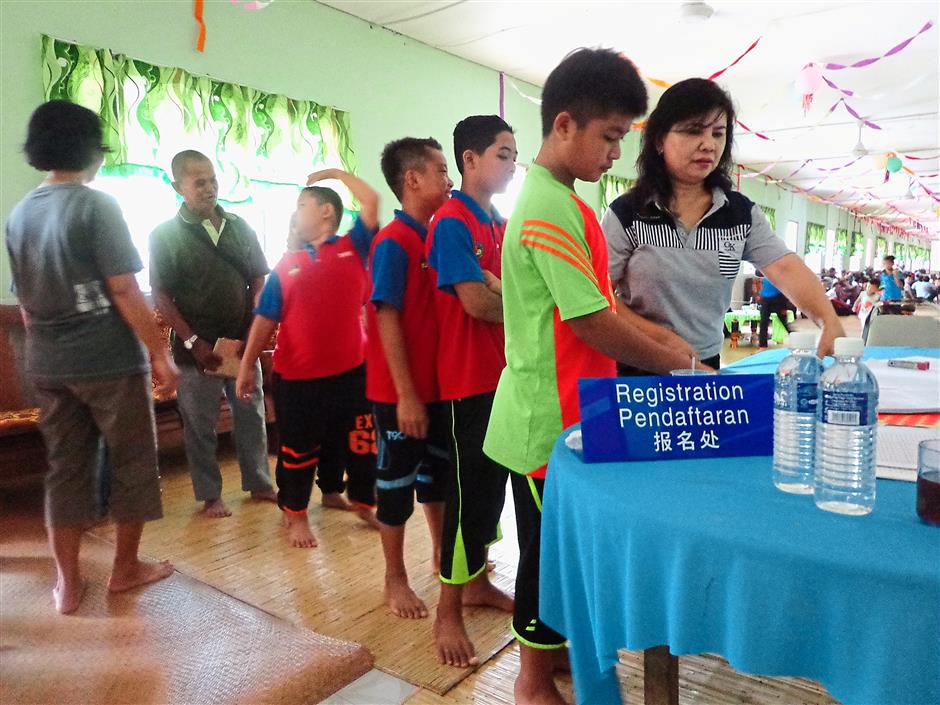 Some of the pupils from SK Nanga Entalau lining up to get registered for health screening.

A local teacher, who kindly gave some of us a ride out to the main road after our vehicle gave up the ghost after stalling for the third time, told us their vehicles are specially modified for the road.

And true enough, compared to our earlier bone-thumping, start-stop ride, his drive was much smoother – though still rather bone-jarring – and confident, eating up the kilometres at twice the speed of our previous vehicle.

While it took us around two hours to reach the parking lot of Rumah Entalau from the main road, the teacher said, in ideal conditions, it usually takes the locals only about 45 minutes. (Rumah Entalau lies across a narrow river that must be crossed by boat, so all vehicles have to be parked on the opposite bank in the community’s parking lot.)

But all the experience in the world makes no difference when it rains, turning the road into mud so slippery, it’s too dangerous to drive on.

At times like these, any medical emergencies have to be sent via the river to Hospital Betong – a journey of about three to four hours in narrow longboats.

Even by road, the distance to this district hospital is about one-and-a-quarter hours away, though the bumpy nature of the road is bound to make an already-ill patient feel even worse.

Additionally, the hospital is not equipped to handle more complex cases, and such patients need to be sent further to the larger Hospital Sri Aman, a further two hours’ drive away. 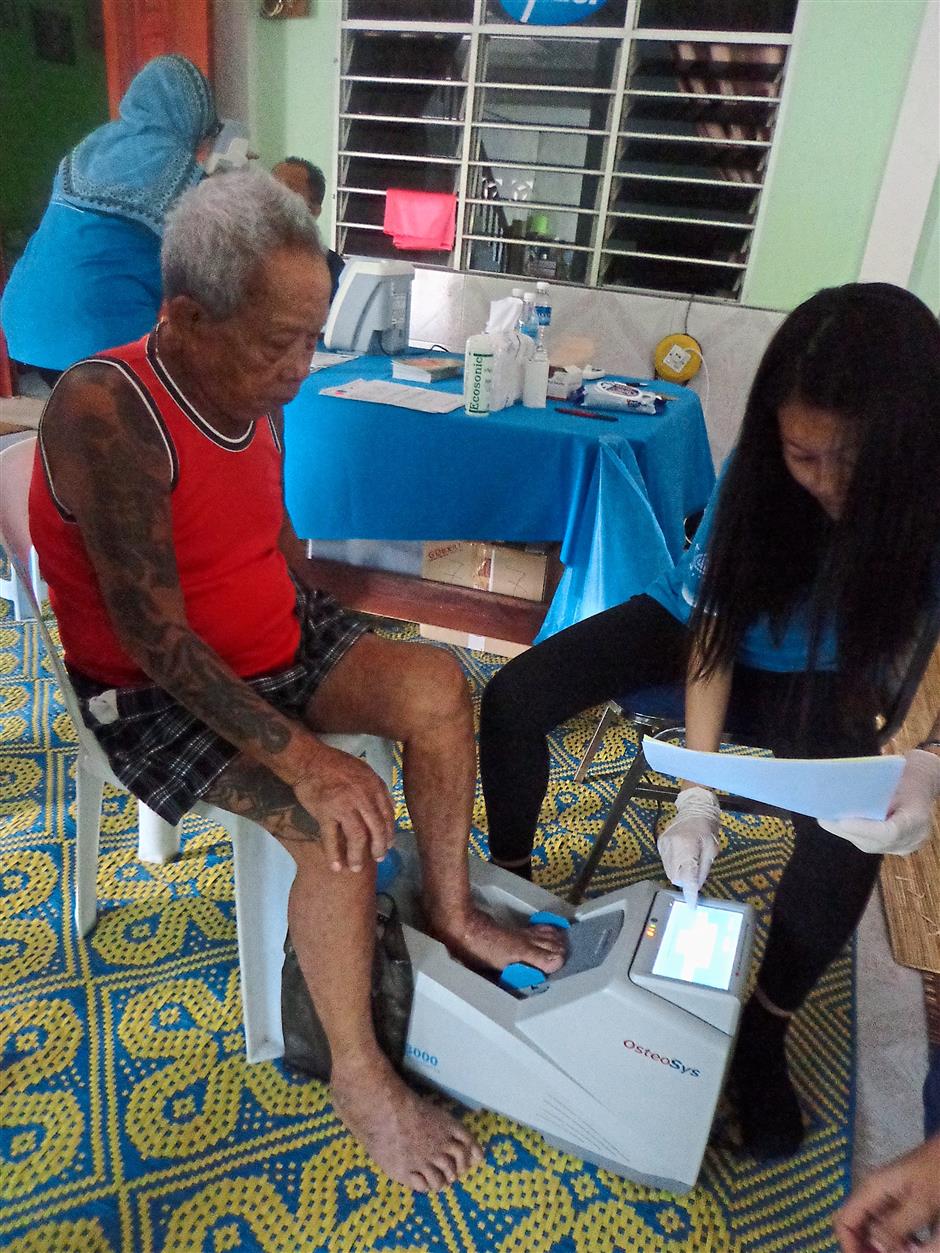 An older Iban gentleman getting his bone density measured.

This is the reason why expecting mothers usually pack up during their last month of pregnancy and move to town to stay with relatives – so that they need not worry about getting to the hospital on time when they go into labour.

It doesn’t always work though, as the longhouse’s secretary, Bungkong Gura, shares: “They cannot give birth here. We have had mothers giving birth on the longboats on the way to the hospital before.”

The clinic’s medical assistant is only allowed to dispense medications for simple ailments like the cold and flu, as well as chronic di- seases like hypertension and diabetes.

As a community of primarily farmers who have more than adequate physical activity and restricted access to junk food, one would expect that the inhabitants of Rumah Entalau would be quite healthy.

However, health screening carried out as part of Pfizer Malaysia’s Local Health Fellows Programme, which also included four other nearby longhouses and the communities of Nanga Murat, Nanga Pan and Annah Rais, showed otherwise.

A total of 397 adults and 33 children were screened during the programme, with 121 adults and 20 children from Nanga Entalau itself.

Carol Tan, a training manager with Pfizer Malaysia and an active volunteer with the company’s corporate social responsibility (CSR) programmes, says: “Some of them don’t go to the clinic regularly (for check-ups and collecting medication). Some don’t take medications regularly – compliance is not there.” 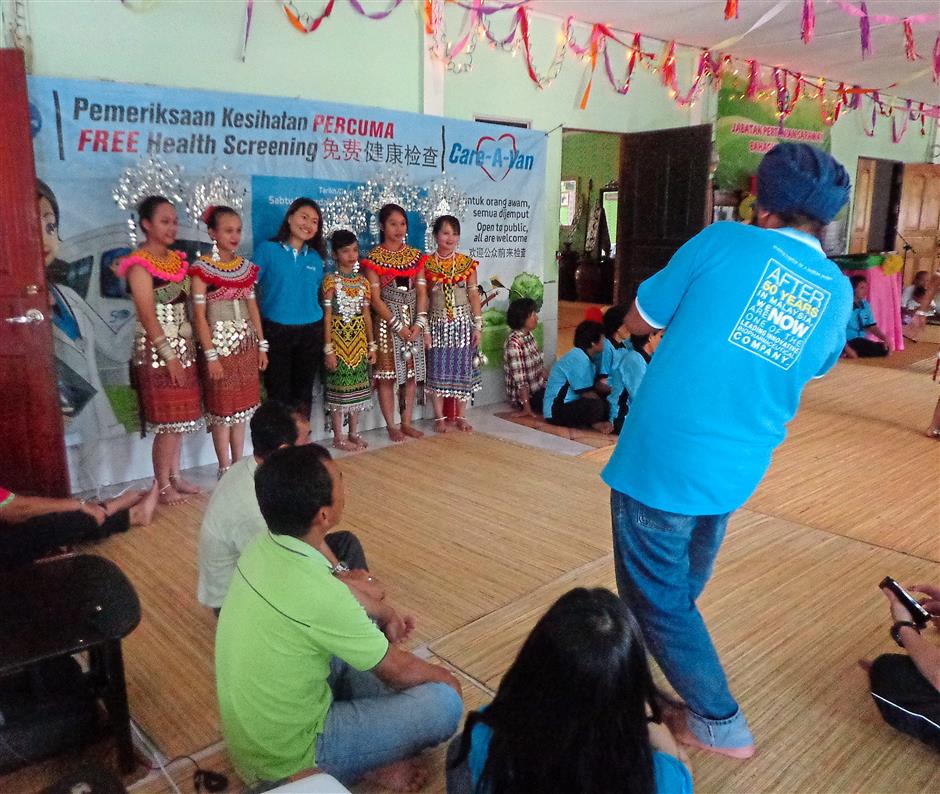 Tan (in blue shirt) posing for a photo with some of the longhouses teenagers, all dressed up in their native Iban finery to welcome the visitors. As the one in charge of the blood pressure station, Tan notes: “Most of those with high blood pressure are females who don’t go out and stay at home to take care of the kids and house.”

Around 13 Pfizer Malaysia Local Health Fellows participated in this ninth version of the programme, manning the registration, height and weight for body mass index (where medical history is also taken), blood pressure, intra-ocular pressure (to check for glaucoma) and bone density, blood test and deworming stations.

At Rumah Entalau, the company’s medical director, Dr Vicknesh Welluppillai, was also present to offer medical consultation to those with particular problems.

He says: “I saw about 20-25 people. Most of them are quite alright. And surprisingly, not many of the males are smokers, because in rural areas, men tend to smoke more.

“I only had to refer three or four people to the hospital for high sugar, high blood pressure and high cholesterol.”

He notes that the presence of high cholesterol and blood pressure levels might be due to the community’s diet, which incorporates a lot of salted and barbecued food.

The Pfizer team also gave talks on basic hygiene, nutrition and disaster preparedness at each stop.

Says Bryan Teng from the Pfizer Ipoh sales department and a Local Health Fellows pioneer: “These people know a bit about their health, but they don’t know that things can be done to prevent diseases.”

This annual programme is a local offshoot of Pfizer’s Global Health Fellows Programme, which sends the company’s employees on voluntary short-term assignments to developing nations to help promote access to quality and efficient healthcare.

The Local Health Fellows are all volunteers who have previously served with Care-A-Van, another monthly voluntary CSR programme that offers free mobile health screening services to less privileged rural and semi-urban communities – a prerequisite before they can apply for the Health Fellows Programme.

The volunteers, who can come from any department within Pfizer, are also expected to maintain their work output and must have been with the company for a certain period of time.