By AP for Hürriyet Daily News 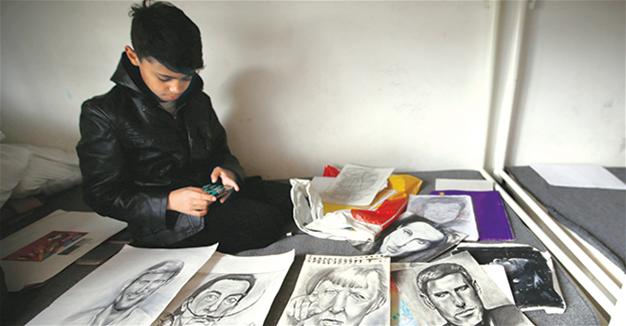 Farhad Nouri is known among migrants as Little Picasso. The 10-year-old from Afghanistan, who is stranded in Serbia together with his parents and two younger brothers, has earned his nickname for two reasons: he knows how to draw and he loves Pablo Picasso.

“One day I will draw him too,” Nouri said of the famous Spanish artist, his big dark eyes shining with delight

His talent has earned Nouri the status of a local celebrity. He recently met U.S. actor Mandy Patinkin, who works with refugees with the International Rescue Committee, and who has urged President Donald Trump to be more welcoming to people displaced from war-torn countries.

“Merkel maybe can do something to open the border,” Nouri said in English, which he has learned over the year since he fled war and poverty in his home country.

Nouri also likes to draw portraits of his family and friends, fairytale castles, nature or anything else that comes to mind. Painting, he said, has helped during the flight.

“I was in Turkey, I was in Greece,” Nouri said of the trip. “Here in the camp I like my painting, I like drawing my feelings and faces.”

The Nouri family is among several thousand migrants who have been stuck in Serbia looking for ways to reach western Europe amid closed borders and mounting anti-migrant sentiments.

Nouri said his family would like to go to Switzerland or the United States. Memories of the family home in Afghanistan have been blurred, he said.

“I remember the door when we are going away, I remember that day,” he said. “When I think I can remember something.”

Nouri’s temporary home in Serbia, where the family has formally applied for asylum, is a narrow and damp room with bunk beds, a wardrobe and a small table.

The former workers’ barracks had previously hosted refugees from the 1990s wars in the former Yugoslavia.

Nouri said he plays with other children in the refugee camp and attends Serbian language classes in the camp during the day. He usually draws at night, in his bed, while it is quiet outside.

“I teach myself. Sometimes I see from the videos, on YouTube, and I learn,” he said.

Nouri said he hopes his family will be able to build a new life in Switzerland. He said one day he will become a painter and a photographer, and will play guitar.