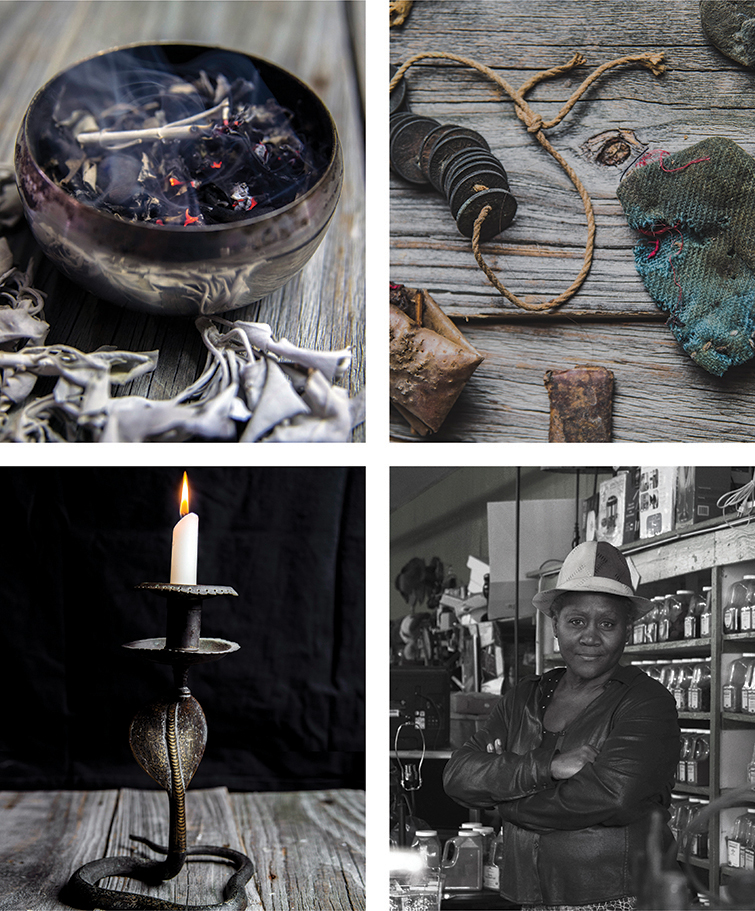 Until the mid-20th century, the Lowcountry was a hotbed of hoodoo. Each area had its own root doctor. Dr. Snake, Dr. Bug, Dr. Crow, PP.H. Washington, Dr. Eagle, held court openly in downtown Beaufort. Anyone could go to Dr. Eagle’s office and get a potion. Former local restaurateur saw cars lined up as far away as Alabama.

Some people have a lawyer on retainer? I have a root doctor on retainer,” said Roger Pinckney, author of “Blue Roots: African-American Magic of the Gullah People.”
Although this West African spiritual tradition has retreated to the closet, rootwork is most assuredly alive in the Lowcountry.
Also known as hoodoo, rootwork traveled with slaves to the Georgia and South Carolina sea island plantations. There, slaves and their descendants, called Gullah, intertwined their folk beliefs with Christianity.
Afraid of slave revolt, plantation owners permitted this homegrown way of healing to continue. And even visited slave quarters for their own physical ailments. The practice flourished post-slavery, spurred on by the physical remoteness of slaves and their descendants who remained behind on the sea islands.

THE ABCS OF ROOTS AND ROOT DOCTORS
Luck, love, health, prosperity, revenge, and protection from enemies and evil spirits are the most common reasons for hiring root doctors.
Generally, they wear two hats: The herbalist dispenses ointments and potions; the conjurer applies and lifts spells. After leaving Africa, root doctors had to experiment with herbs indigenous to the South and divine new remedies.
Cloth sacks called “roots” are filled in secret with various ingredients, stitched up, and worn as amulets, carried inside shoes, or sewn inside clothing. Sometimes roots work their magic by being buried, placed beneath doorknobs, or otherwise tossed.
Dirt surrounding graves, or “goofer dust,” is considered a potent base material because root doctors believe the lifeblood of the deceased inheres in the soil. Hence, for example, goofer dust surrounding a rich person’s grave bodes well for enhancing prosperity.
Other common ingredients include herbs, powders, bones, feathers, hair, fingernails, ground pepper, etc.
Hexes are typically accompanied by short ceremonies during which root doctors pray, incant magical words or enter a trance.

THE HIGH SHERIFF V. DR. BUZZARD
Until the mid-20th century, the Lowcountry was a hotbed of hoodoo. Each area had its own root doctor. Dr. Snake, Dr. Bug, Dr. Crow. P.H. Washington, Dr. Eagle, held court openly at 1408 Congress Street in downtown Beaufort.
“Anyone could go to Dr. Eagle’s office and get a potion,” said Thomas McTeer, son of Ed McTeer, Beaufort County’s “High Sheriff” from 1926-1962, aka “The White Witch Doctor.”
Harry Chakidef, former local restaurateur, saw cars lined up as far away as Alabama.
But not all root doctors were male. Many early ones were also midwives. And Dr. Eagle’s common law wife, Valerie Boles, Minerva in “Midnight in the Garden of Good and Evil,” took over her husband’s practice after he died.
“I remember a case in North Carolina where both husband and wife were root doctors,” said Jamal Touré, historian and owner of Day Clean Journeys. “He had trained his wife and she became more successful so he killed her.”
The granddaddy of them all was Dr. Buzzard. He reigned on St. Helena Island, was revered nationwide, and had a particular knack for “chewing the root” – chomping on an unidentified substance in front of intended victims. He’d often perform the ritual in court and witnesses who’d been previously prepared to testify suddenly refused.
Medical doctors began reporting patients with illnesses they couldn’t solve. People complained of being hexed. Dead animals and mysterious powders appeared on courthouse steps. “Into this seething caldron of root, spell and hex stepped the new Sheriff,” wrote Roger Pinckney in his book, “Blue Roots: African-American Magic of the Gullah People.”
There was no law against casting and removing spells, but practicing medicine without a license was illegal.
The High Sheriff never carried a gun, but was a skilled lawman. So he allowed stories of his success at collaring criminals to circulate along with speculation he was spiritually gifted. He studied rootwork, and townsfolk eventually turned to him for help. After Dr. Buzzard’s son drowned – and rumors spread McTeer rooted him – the white and black root princes made peace. Dr. Buzzard was convicted of practicing medicine without a license, paid a small fine, and agreed to limit his practice to conjuring. In “Coffin Point: The Strange Cases of Ed McTeer, Witchdoctor Sheriff," author Baynard Woods recounts Dr. Buzzard’s lawyer criticizing his client’s punishment “for what the root brotherhood had been doing with impunity for generations.”
After losing his re-election bid, McTeer saw patients regularly. During conjuring ceremonies, he wore blue-tinted glasses, wielded a carved driftwood club called a mandrake, and exploded gunpowder from behind an African mask.
By the time he and Dr. Buzzard died, the Lady’s Island Bridge had been built. And tourists began snatching up land often lost by Gullahs unable to pay tax arrears.
“The influx tended to smother the local culture,” McTeer’s son Thomas said.

Holy sage (top left) at the mlk herb shop in Savannah, GA. Owned by Consuelo Lawson (bottom right.) The items were used to remove roots in a ceremony along with the candle.

RETREAT UNDERGROUND
Today root practice exists primarily in the shadows. Twentieth-century laws and medical advancements have made practitioners even more wary of prosecution. But stigma is an equal deterrent. Some people claim they’re engaging in devil worship.
“I think it’s because it came from black people that it’s maligned,” said Aiken psychotherapist and author of “Low Country Shamanism,” Paul Leslie. “They don’t want to be ridiculed.” Historians are hoping to change the tide of understanding. And authorities on West African culture like Greg Grant and Jim Bacote of the Geechee Kunda cultural center are trying to preserve this library of knowledge.
But with root doctors preferring anonymity, how do you find one if you’re in the market?
Word of mouth. Find someone who knows someone, convince them you’re a true believer, and mean it. Watch and listen.
“Plenty of people claim to not know things and yet there’s their candles and rituals when they take you to their back rooms,” said Leslie.
Touré recalls the serendipity of meeting a stranger in Walmart who’d driven all the way from Columbia in search of Dr. Lavender, Savannah’s then resident root doctor, who’s recently deceased. Touré steered him.
“Are you a root doctor?” I ask. Touré laughs uproariously. “I share my knowledge with people,” he said.
“I consider myself an herbalist,” Grant said. Schooled in the use of botanicals by his godparents, Grant has used home remedies all his life.
“A lot of men come up to me with prostate problems,” he confessed. “I tell them to get berries off the saw palmetto, steep the berries, squeeze it out and drink the liquid.” But he’s careful to add disclaimers and not dispense to anyone.
“This is where things have gotten to. You have to be PC. You never know who you’re talking to,” he laments, also recounting the medicinal qualities of rabbit tobacco or “life everlasting” for colds, toothaches and asthma; sweet gum twigs for digestion; willow twigs for headaches; and green huckleberries for skin ailments. And blackheads? Grant said people used to wash their face first thing in the morning with urine.
When asked if he's a root doctor, Thomas McTeery said, "My wife laughs that I am. She believes the mantle” – transference of power between root doctors – “was put on me.”
“I’ll use dust off my father’s grave and something else that strikes me as important, maybe a sea shell,” he said, admitting the occasional roots he makes for sick friends. He likens the ritual to communion.
Angel Hakim, originally from Savannah, now practices in Maryland. She advertises as a “spiritual medium.”
“My daddy was a root doctor nicknamed Prophet,” she said, taught by Mother Kent, a dark powerful lady with snow white hair from Rocky Ford. As a child, Hakim watched pine trees bow and balls of light travel from Mother Kent’s hand while she prayed. “When she stood up, lightning danced through her living room.”
Hakim only practices “white magic.” She communes with spirits, reads the tarot, and works with candles, oils and baths. She’ll “dress and bless” gold pieces to combat negative financial forces. When it comes to relationships, she won’t help people leave their spouses or use black magic remedies like burying roots under young trees to force relationships to grow. After all, she pointed out, what if you eventually want out of the relationship? She believes the bad energy you put out comes back to you. She will, however, help clients “coax” love along.

COST
If you manage to find a root doctor, what’ll it cost in this generally cash-intensive business?
“There are cultural parasites out there,” said Touré. “But they were there in the late 1800s, 1900s, too. We don’t have the Better Business Bureau.” He recommends taking a hard look at people with knowledge and gauging their sincerity. Hakim said rootwork requiring exorbitant sums and repeat visits raised red flags.
Some claim the Sheriff was a fake. But he never charged, and many more proclaim him a great friend to the Gullah people.
Still, costs vary depending on the practitioner’s skill and the complexity and gravity of your dilemma. How much you’re willing and able to pay gets factored in along with the “desperation of the person who wants the service,” Touré said.

BUT DOES IT WORK?
“If rootwork were not effective, the practice would have died out centuries ago,” Pinckney wrote in Blue Root. His research suggests current belief is widespread and growing with believers exceeding 50 percent of Carolina whites and reaching 100 percent among Gullahs dealing with crises.
“You have to believe the root is working for you in order for it to work,” said Thomas McTeer.
The signs are out there in the Lowcountry. Houses painted haint blue. Telephones on graves. Coins left behind as offerings on Minerva’s final resting place. The innocent looking conch shell on a friend’s side table. Displaced graveyard dirt. The brown leaves of rabbit tobacco alongside country roads in November, ripe for picking.