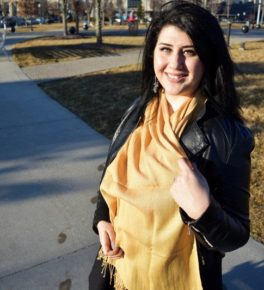 Maiden Syria’s founder, Maha Al-Barazi, volunteered for three weeks during the summer of 2015 teaching Syrian refugee kids in Istanbul, Turkey. During her trip, she met a woman named Um Mohammad, a Syrian refugee. Like many other women, she made scarves for a living along with her children. These women worked for a wage of 4 cents per scarf; meanwhile their employer sold the scarves for $5.50 each. Al-Barazi was extremely moved and inspired by the stories heard that she had the idea of bringing the scarves to the rest of the world to make a difference in the lives of these displaced refugees. Al-Barazi is a Syrian immigrant that migrated with her family to Los Angeles in 1996. She is a full-time Special Education teacher in the Metro Detroit area, an adult ESL teacher for refugees in Michigan, an ongoing volunteer, and an evermore advocate for all children and refugees.

This year, MALA is spotlighting individual stories from men and women who take a stand to eliminate violence against women, both nationally and globally. Our community looks forward to supporting UN Women’s Orange the World Campaign to support efforts to end violence against women and girls worldwide. UN Women and partners around the world are marking the 16 Days of Activism Against Gender-Based Violence, launching from International Day for the Elimination of Violence against Women on November 25th until UN’s International Human Rights Day on December 10th.

A month before my wedding I decided to travel 5473 miles to Istanbul, Turkey where over 2.7 million refugees have been displaced out of Syria since the nearing six-year conflict. After years of feeling like my hands were tied, I decided that I was going to do something about the largest humanitarian and refugee crisis of our era. I packed one and a half suitcases of donated school supplies, raised money for my ticket and was on my way with a handful of volunteers to teach at a three-week summer school camp where there are as many as a half million Syrian refugee children that are not attending school in Turkey.

I had just graduated with a degree in Special Education and was prepared to take on the exciting role of teaching English to hundreds of Syrian refugee children for three weeks. I had written out pages of lesson plans for the hungry minds that I would soon remember forever. I researched different strategies for teaching children that had been affected by war. When you’re about to teach children for a short three weeks that have lost three years of education, you make sure that you are equipped with the greatest strategies and the most engaging lesson plans.

At the end of my trip, we went to a predominantly Syrian-refugee neighborhood to distribute food boxes. We went door to door to visit the families in need and were invited into their empty basement level one-bedroom homes. Despite the little these families had we were greeted with immense hospitality. That day I met one of the most important people in my life today, Um Mohammad, which translates to “the mother of Mohammad.” Um Mohammad is a woman that is considered a true leader amongst the Syrian refugees in her community. A mother of six children, she is raising them all on her own while her husband chases the refugee dream of a better life for the family somewhere in Europe.

Like millions of Syrian refugees in Turkey, Um Mohammad is from Aleppo, where she left the home that took her and her husband ten years to save up for. What’s left of her home and past life is a pile of rubble after major shelling in the neighborhood. Luckily, she was in Istanbul with her family at that time and was spared the brutality that has befallen hundreds of thousands of Syrians. Um Mohammad took us from one house to another introducing us to many Syrian refugee families in the neighborhood. Um Mohammad’s story is like that of thousands of Syrian women in Istanbul; she is a single parent raising six children on her own, pays rent, feeds her children, and keeps her head up high for hope.

Like many of the Syrian women in Istanbul, Um Mohammad makes Pashmina scarves for a living. She is looked up to as the community leader because every time a new Syrian refugee family arrives to the neighborhood, she teaches the woman in the family how to survive and make it in their new environment. Um Mohammad recruits these women to make scarves for a living – one of the only viable jobs available to them. They spend their days working on the scarves, earning a wage of 4¢ a scarf and up to $2.00 a day. In a typical month the women bring home around $56, significantly less than the average monthly salary of $480 that a Turkish citizen earns. This is why the whole family is obligated to work – including children. Boys older than twelve years old work as bus boys in factories and are tasked with cleaning the machinery and serving coffee and tea. Girls and boys under the age of twelve stay at home with their mothers to help make the scarves. After hearing this story something inside of me moved.

I couldn’t stand the fact that these women were being taken advantage of by not earning a fair wage. Is it because they’re refugees? Do people really think that refugees are of lesser worth? I was outraged and decided that I needed to do something about it. I had a vision of selling a scarf to every single American household to help these women and children have a better chance at life. I exchanged numbers with Um Mohammad and promised that I would get in touch with her. Later that evening I pitched my idea to the volunteers, asking if anyone would like to participate in taking scarves back to the United States with the intention of selling them and forwarding 100% of the proceeds to the Syrian refugee families in need. Many of the volunteers thought it was a great idea and donated enough to purchase the first batch of scarves. Two of these volunteers would later join me on this mission that we ended up calling Maiden Syria. We sold all one hundred scarves in the first six months of operation and are now on our third order of scarves.

I may not be helping a large number of refugees in Istanbul, but I know that I am trying to spread hope and education amongst the families in desperate need. Maiden Syria now sponsors a family of five orphans that lost their father to the war and their mother to a brutal fight with cancer. We’ve also helped register 20 children in school and purchased new school uniforms, backpacks, and the school necessities that they’ll need to succeed. With the help of hundreds of donors Maiden Syria has been able to help refugees obtain the necessities they need – including heaters, fridges, medical supplies and even toys for children during the holidays to help ease the pain and suffering that they’ve unjustly had to experience. Most importantly though, I’ve made a heartfelt connection with these people and plan to continue working for the refugees until they’re able to live with the dignity they deserve.