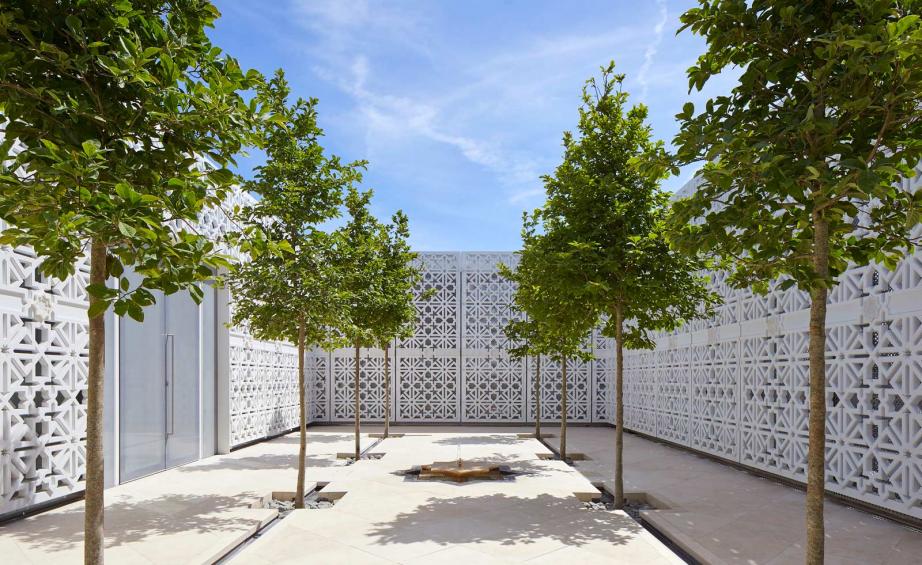 Maki & Associates, led by Fumihiko Maki, has designed a new London headquarters for the Aga Khan Foundation, the Aga Khan Centre in Kings Cross. The Pritzker prize-winning architecture practice cut out a series of Islamic courtyards and gardens from a ten-storey block providing offices, a library and exhibition space. With its light-coloured limestone facade, modern engineering and unique sheltered spaces for reflection, the architecture promotes openness and contemplation through its form.

The building brings the Institute of Ismaili Studies, the Aga Khan University, the Institute for the Study of Muslim Civilisations and the Aga Khan Foundation UK together, after existing for 40 years in London at various locations, in their joint mission to open up a dialogue and understanding of Muslim cultures. A new library at the centre of the building provides a home for the centres’ unique collections of books and manuscripts.

As well as a standard brief of practical requirements, the Aga Khan, the 49th hereditary Imam of the Shi’a Imami Ismaili Muslims, delivered a handwritten letter that was a conceptual brief for the architects, creatively written from the heart. He expressed his hopes of what the Aga Khan Centre could provide for its inhabitants, specifying a ‘network of unique rooftop spaces’ that could communicate the teachings and essence of Islamic culture.

The exterior of the Aga Khan Centre. Photography: Edmund Sumner

‘If all the green spaces are relatively small, relatively secret and can be physically contained, then the overall approach gives us the opportunity to create for each space a sense of seclusion, environmental privilege and contained beauty,’ he wrote.

Gary Kamemoto, lead architect on the project and director at Maki & Associates, kept this letter on his desk throughout the entire design process, referring back to it for inspiration and guidance.

Developed into the plan are a series of terraces, gardens and courtyards. Each with different designs, influences and moods, they lift inspiration from Islamic garden traditions across the world from North Africa, Spain, Middle East, Persia and India. Maki & Associates worked with garden designers including Madison Cox, Nelson Byrd Woltz and Tom Stuart-Smith to create carefully crafted, unique feelings within each of the areas.

From the Spanish travertine-lined cloister with a purple garden of sage, rosemary and lavender; to the Syrian courtyard of red jasper tiles patterned with an abstraction of the Sufi script planted with pomegranate trees that reach up to a framed piece of sky; and the rooftop ‘community garden’ paved with Indian sandstone and planted with quince, hazelnut and wild strawberries for picking – each garden expresses a new facet of Islamic culture in an elegant and poetic way.

The Garden of Tranquillity, inspired by covered loggias found in the Middle East, Persia and Egypt, at the Aga Khan Centre in King’s Cross. Photography: Hufton+Crow

Kamemoto describes the Aga Khan Centre as ‘mille-feuille’ the delicately layered vanilla French pastry. ‘It’s layered vertically with different tones,’ he says of the architecture, through which the layered materials and design express the different functions within the building:  the ground floor is a layer of glass, letting the building become one with public space around it – a Turkish restaurant, stationary shop, café and exhibition space will bring people into the building, while an entrance at the north and the south of the plan allows it to be a permeable thoroughfare.

The library at the centre of the ‘vertical university campus’ on the second and third floors, is expressed through a glass double-height entrance. The upper floors above, with their square windows, hold the offices, with the top floor, the icing sugar on the top, is a peak of glass and light, a ceremonial space for the Aga Kahn foundation.

The building overlooks Cubitt Square in Kings Cross, where it neatly slots into the carefully planned masterplan, that specified the size and shape limits of the architecture to allow light to street level and the preservation of historic views.

While Kings Cross has an industrial architectural history of red, brown and black bricks, Kamemoto was inspired by the use of limestone in bands around windows at St Pancras. Further research revealed that it was a Portland Limestone, present in all buildings commissioned by the British crown in London – a material that can be seen in the architecture lining the historic crossroads of Regents and Oxford street. Kamemoto searched for a material that could reflect this royal heritage in a new way, finding the Calizia Capri hard limestone in Granada and Cordoba – Spanish cities known for their Islamic architecture.

In a subversion of the old buildings of central London where windows are recessed deep into their stone facades, the Aga Khan Centre’s windows sit flush against the stone in a continuous surface reflecting the modernism of a Mies van der Rohe skyscraper or a sculptural Bauhaus residence. ‘It’s a very modern building, but it’s our interpretation of melding Islamic culture and the tradition of London architecture,’ says Kamemoto.

Inside, a silver travertine from Italy completes the flooring in the ground floor lobby and the central staircase that leads up to the first floor atrium. A huge artwork pulses 40m through heart of the building. The colourful waterfall of primary coloured gridded shapes is designed by Rasheed Aareen, a UK-based Pakistani artist, who was selected from a design competition.