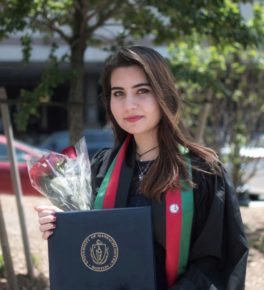 I was born in Balkh a historical province in northern Afghanistan home to the first proto-urban civilization in the area which arose during the 2nd millennium BC. The blue mosque embroiled with Islamic calligraphy and Persian poetry is the iconic building that captures the heart of your imagination. My original home city is also famous for hospitality and the most delicious food flavored by the diverse flavors of Afghanistan and Central Asia.

I was very little that we fled the City of Mazar -e- Sharif and became refugee in Russia. The City was under siege by rival Mujahedeen factions and then the Taliban which ensued horrific crimes. My parents wanted to educate their daughters but there was no hope for our education in Afghanistan under the Taliban.

I grew up in Moscow, Russia. It was somewhat different, in terms of the way people communicated in a very straightforward way as oppose to trying to be more diplomatic in their interactions. Also, there was significantly less tolerance to differences in nationality and culture than that there is in the United States. Despite having been raised there for as long as I can remember, I felt excluded on almost daily basis in school and in public.

I went to high school in Boston. It was a small high school called Boston Community Leadership Academy with a total student body of around 400 students. It was a very diverse school and had very few students who would be considered white in the United States. The teachers and guidance counselors were very helpful, supportive and encouraging.

The current political climate has affected me in many ways due to my Muslim identity, however the overall political and immigration system of the United States has significantly affected my life. I think racism has become more acceptable and there have been instances that I felt like I was mistreated simply because people heard me speak a different language.

In September of 2016 I faced the most challenges in my life because my father was very ill. I was 22 years old at the time and I decided to travel to Afghanistan and do my best to help my father get better. My father had a difficult time remembering my name or performing basic functions. I managed to take him to India and admit him into a hospital there. It was very difficult to do that in patriarchal societies as a 22 years old woman without any friends or family around, but I did overcome it and my father was absolutely healthy by the time we returned to Afghanistan.