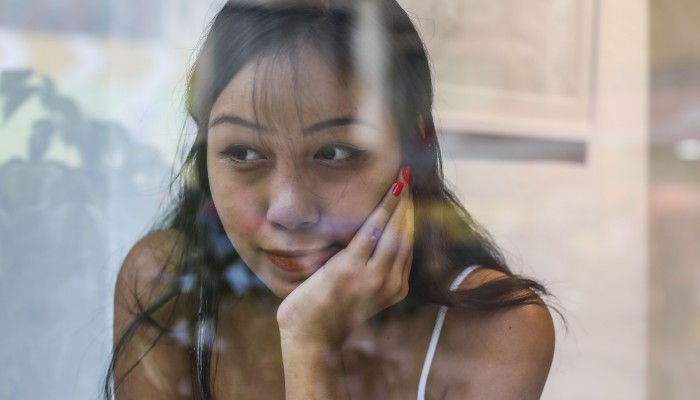 She smokes, she swears and she has written her own six pillars representing her artistic practice: religion, culture, society, roles, gender and humanity. Malaysian artist Engku Iman challenges stereotypes and people’s expectations of her as a Muslim and a woman.

A recent artwork, Kilang Agama, which means “religion factory” in Malay, comprises one of her family’s old prayer mats which she provocatively cut into squares. She produced it after a research trip in 2015 to Kelantan, one of the country’s most religiously conservative states.

The work is featured in a solo exhibition of her art in Hong Kong, called “Rukun Iman”, a term meaning the six pillars of Islam, and it is so close to her own name – passed down through royal lineage – that it’s as if it is her birthright to subvert it.

The vandalised prayer mat has been reassembled and placed on a wooden base to make a sliding puzzle. On it are painted symbols that give an unflattering summary of the Kelantan trip.

A 7-Eleven logo covers up the original, woven niche that must always point at Mecca when a Muslim prays. The convenience stores were her lifeline in Kelantan, she says, because she felt thoroughly deprived during her fortnight in the backward state. All her material needs were fulfilled at a 7-Eleven: air-conditioned havens with free Wi-fi and perfectly edible food.

A picture of a derelict house represents what she feels are the warped priorities of the state: piety ahead of people’s livelihoods; an image of a Rayani Air plane refers to Malaysia’s only sharia-law compliant airline, which survived for less than two years because of the poor quality of its service.

For all its cynicism, Kilang Agama was nonetheless included in a group exhibition at the National Visual Arts Gallery in 2016. Iman says there was no issue with censors, who do not permit the public display of art that risks offending Muslim sensibilities, because she is not attacking the religion. She says her work merely integrates the secular with the sublime, and the slide puzzle format alludes to individuals’ search for spiritual fulfilment.