Malaysia is home to more than two million ethnic Indians who live among a predominantly Muslim Malay population of some 32 million. 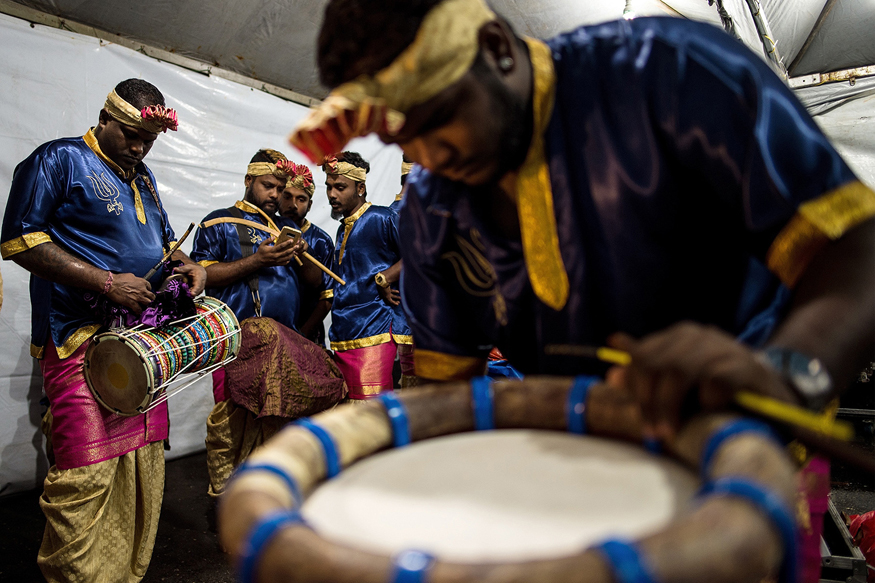 Malaysian Indian musicians bang drums on a stage shrouded in smoke, singing in Tamil, as dancers wearing shimmering gold outfits adorned with peacock feathers gyrate to the pounding rhythm. The "urumee melam" ensemble are performing a traditional form of folk music brought to Malaysia generations ago by Indian laborers but which is now enjoying a revival among the country's South Asian community.

Malaysia is home to more than two million ethnic Indians who live among a predominantly Muslim Malay population of some 32 million. They are descendants of Indians who came to Malaysia during British colonial rule in the 19th and 20th centuries to work on expansive agricultural plantations. The laborers, mostly from the southern state of Tamil Nadu, brought with them the "urumee melam", which would be played at Hindu temples on the estates.

"It was the music of the working class -- entire communities played it with every ritual," Eddin Khoo, director of Pusaka, an organisation that supports traditional performing arts in Malaysia, told AFP. The "urumee melam" takes its name from the urumee, the intricately carved, double-headed drums made using goat hide that are the lead instrument in the ensembles, which feature other traditional Indian drums. In Tamil Nadu, the groups were traditionally associated with inauspicious events such as funerals. But in Malaysia they have come to be seen by most in a positive light, and perform at cultural shows and festivals.

After Malaysia's independence in 1957, huge numbers of ethnic Indian agricultural workers lost their jobs over the years as they were replaced by cheaper labor from other parts of Asia and some plantations ceased operations. Many moved to cities and took up menial jobs and ended up in slums, struggling to survive with tales of broken families and unemployment all too common. While some have become successful, many members of the mostly Hindu minority remain trapped in poverty and see little chance of advancement as discriminatory policies favor the Malay majority in areas ranging from employment to education.

Muslim Malays make up over 60 percent of the country's population, with sizable ethnic Chinese and Indian minorities as well as indigenous groups. Malaysia's Indians have stayed in touch with their cultural roots in many ways, such as celebrating major Hindu festivals, but the tradition of "urumee melam" faded amid the upheavals of the post-independence era.

However a push by community leaders and a growing interest in Tamil history and culture among the younger generation of Malaysian Indians means the beat of the urumee drums is now being increasingly heard across the country. The recent urumee melam performance was part of a festival in Bukit Sentosa, central Malaysia, celebrating the folk music that brought together several bands, which played in front of an audience of hundreds of spectators.

The drummers thumped urumees with curved sticks while exotically dressed dancers twirled on stage, including some carrying water jars on their heads. "I play urumee because it's my cultural music, and I'm hoping to bring this culture to the next generation," Vigneswaran Subramaniam, 32, one of the musicians, tells AFP. There are now believed to be hundreds of urumee melam players around Malaysia, playing regular shows in some temples and performing at Hindu festivals such as Thaipusam.

Bala Tharmalingam, from Malaysia Hindu Sangam, an organisation representing the Hindu community, said his group had encouraged people to take up the folk music. "We made the Indian community understand that music or learning or dance was not purely for entertainment, but preserving culture," he said.