By WILLIAM GRIMES for The NewYork Times

Malick Sidibé, whose black-and-white photographs of young partygoers captured the exuberance of newly independent Mali in the 1960s and ’70s and made him one of Africa’s most celebrated artists after his work was shown abroad in the 1990s, died on Thursday in Bamako, Mali. He was 80.

His son Karim Sidibé said the cause was complications of diabetes, The Associated Press reported.

Mr. Sidibé started out taking pictures at weddings and christenings in the 1950s, using a Kodak Brownie camera, but after opening his own studio he branched out into a more ambitious form of social reporting. He attended Saturday-night parties at which young Malians, dressed to the nines, danced the twist, the rumba and the merengue to the Beatles, James Brown and Afro-Caribbean music. This was Mali’s youthquake, and Mr. Sidibé was its photographic witness.

“For me, photography is all about youth,” he told The Daily Telegraph of London in 2008. “It’s about a happy world full of joy, not some kid crying on a street corner or a sick person.”

His small-format photographs, surrounded by a brown tape border, were intended to be kept as souvenirs or sent as postcards. But after Western collectors discovered his work in the 1990s, they began presenting it, in enlarged sizes, in galleries and museums in Europe and the United States. He quickly became, with the older Seydou Keita, Mali’s most famous photographer and an international star.

Mr. Sidibé was the first African to receive the Hasselblad Award, in 2003, and at the 2007 Venice Biennale he received the Golden Lion Award for Lifetime Achievement, the first given to either a photographer or an African artist.

“He really changed the way Westerners look at Africa,” said Jack Shainman, whose Manhattan gallery currently has an exhibition of Mr. Sidibé’s work. (It runs through next Saturday.) “He captured the newfound freedom after colonialism — that time, and that moment,” he said.

Malick Sidibé was born in 1935 or 1936 in Soloba, a village in what was then French Sudan. He grew up in an extended family of 60 and herded sheep and cattle for his father.

He was chosen by the village chief to be the first child in his family to attend school, a white institution in Yanfolila, where he learned French. His skill at drawing with charcoal earned him a place at the Sudan School for Craftsmen (now the National Arts Institute), where he was trained as a jewelry maker.

A French expatriate photographer, Gérard Guillat-Guignard, hired Mr. Sidibé to decorate his combined studio and shop, Photo Service Boutique, and then took him on as an apprentice. While running the cash register and delivering photographs to customers, Mr. Sidibé closely observed Mr. Guillat and absorbed the fundamentals of photography. 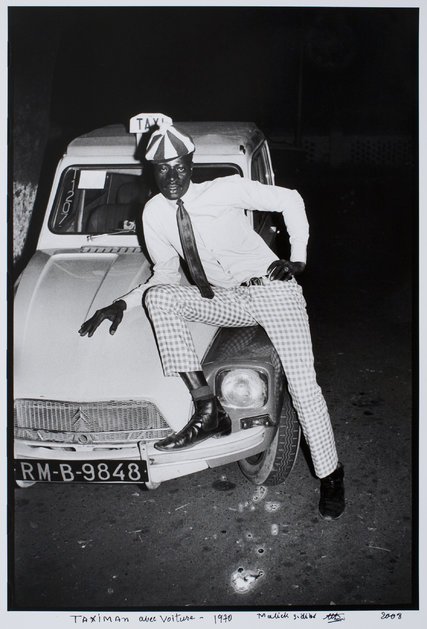 Before long, he started working commercially. “I did the African events, the photos of Africans, and he did the European events — the major balls, official events,” Mr. Sidibé told the photography website gwinzegal.com in 2008.

After going out on his own, he created Studio Malick in 1958, where he specialized in portrait photography with his own distinctive touch. He coaxed his subjects into more informal poses that gave his work a lively, vibrant quality. Tonally bold and beautifully composed, they often showed subjects glorying in a new possession — a sheep or a motorcycle — or showing off in modern clothes.

“Generally, women come to get photographed as soon as they have a new hairdo or purchase a trendy piece of jewelry: a bracelet, a necklace, a handbag,” Mr. Sidibé told The Los Angeles Times in 2002. “For men, it’s when they buy a new bicycle or motorcycle.”

He found a rich subject in the parties and dances put on by social clubs with names like the Sputniks, the Black Socks and Las Vegas. On some nights, he would attend four parties, one after the other, photographing young Malians able, for the first time, to dance close together.

“At that time, young people were very motivated,” he told the French newspaper Libération in 1995. “Every Saturday night you had to dress elegantly. People would plan their outfits all week long. To make an impression, you had to be impeccable, with a trouser crease so sharp you could cut off the head of a chicken with it.”

He later produced a portrait series called “Vue de Dos,” which showed women with their backs turned to the camera.

In the early 1990s, when he had turned to camera repair work to earn a living, Mr. Sidibé was discovered by the photographer Françoise Huguier and by André Magnin, a curator who had been sent to West Africa by Jean Pigozzi, a French collector.

Mr. Magnin organized an exhibition of Mr. Sidibé’s work at the Cartier Foundation for Contemporary Art in Paris, and a coffee-table book appeared soon after. In 1999, Jeffrey Deitch showed Mr. Sidibé’s party photos in Manhattan in the show “The Clubs of Bamako.” A documentary about him, “Dolce Vita Africana,” was shown on British television in 2008.

He is survived by three wives and 17 children.

As he grew older, Mr. Sidibé stopped going to the parties, unable to blend in, but he remained sentimental about the era and the free and easy way that young Malians of all classes mingled on the dance floor.

“I loved the music and the atmosphere, but above all I loved the dancers,” he told The Telegraph. “The moments when young people dance and play as though the stars belong to them — that’s what I loved the most.”