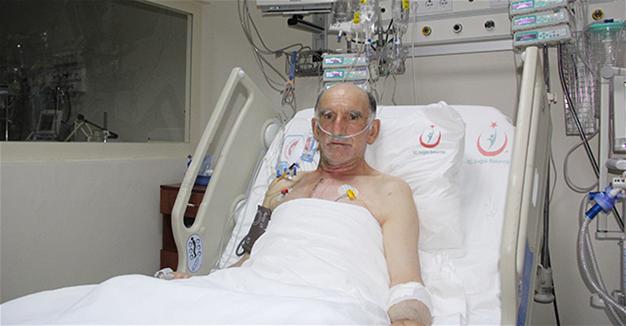 A man survived miraculously after his heart stopped beating 40 times in an hour after undergoing bypass surgery in the eastern province of Erzincan, Doğan News Agency has reported.

The 66-year-old man, Bekir Demirtaş, went to hospital with a complaint of chest pain on Oct. 3.

A group of doctors that consisted of doctors Oruç Alper Onk and Ümit Kahraman and junior Doctor Şerif Yurt performed bypass surgery on three of Demirtaş’s blood vessels at the Mengücek Gazi Training and Research Hospital in Erzincan on Oct. 4 following an angioplasty.

Onk said Demirtaş’s heart stopped while he was preparing to take the service from the intensive care unit.

“When we cut the hoses which were being used for the evacuation of blood, his heart stopped. While cutting the hoses, his heart’s membrane was torn. A lot of blood circulated around the heart due to the incident. So we intervened on the spot because we could not have made it to the operation room,” he said. “His heart stopped beating 40 times in an hour.”

“We opened up his rib cage and did cardiac massage. But we did not get a response from the patient. So we took him to the operating room again. We carried out bypass surgeries on two other blood vessels again and his heart started to beat again,” he said.

Demirtaş was kept in intensive care unit for three days. He was later taken to the service after he woke up.

“We carried out almost 500 cardiac surgeries. But this was the first time we witnessed such an incident. We intervened at least 40 times,” he said.

Meanwhile, Demirtaş sang a song when he was in the intensive care unit after coming back to life.

Demirtaş thanked all the nurses, doctors and other medics who took care of him.

He said that he was healthy enough to wrestle, fight and dance the horon.