If you were to Google search the definition of ‘mansplaining’, it would say “to explain something to someone, typically a man to a woman, in a manner regarded as condescending or patronizing.”

Having explained that, if you were to ask any Muslim women in the past few days about mansplaining, they would direct you to the IlmFest 2016 Facebook thread.

Ilmfest is a festival held in many different cities from all over with keynote lectures, live performances, interviews, and talent shows. It is meant to engage the Muslim community. It is also supposed to be engaging to both male and female Muslims. Keyword: Supposed.

In a tale as old as time, the whole debacle originated when a woman voiced her grievances with the lack of female speakers attending the event on the Ilmfest 2016 Facebook page.

Rather than address the issue at hand, men and women, whom I can only assume are self-proclaimed “meninists”, jumped at the chance to prove their “noteworthy” cause.

Once again, instead of listening to the issues that actually matter to women, their voices were overshadowed with comments such as:

“ALL THE FEMALE SPEAKERS ARE STAYING AT HOME MAKING THEIR HUSBANDS SANDWICHES, AS THEY GET MORE GOOD DEEDS FOR DOING THAT. YOU SHOULD USE THEM AS ROLE MODELS AND DO THE SAME!”

In case you needed to see the real deal, here it is:

Yes, that was sadly a direct quote. Ill-founded comments such as “I encourage oppression” among other sexist remarks, began to flood the page.

Meanwhile, others took the all too familiar route of shutting down an opinion by posting inapplicable snippets of Quranic verses to silence those who would dare argue with the word of God. 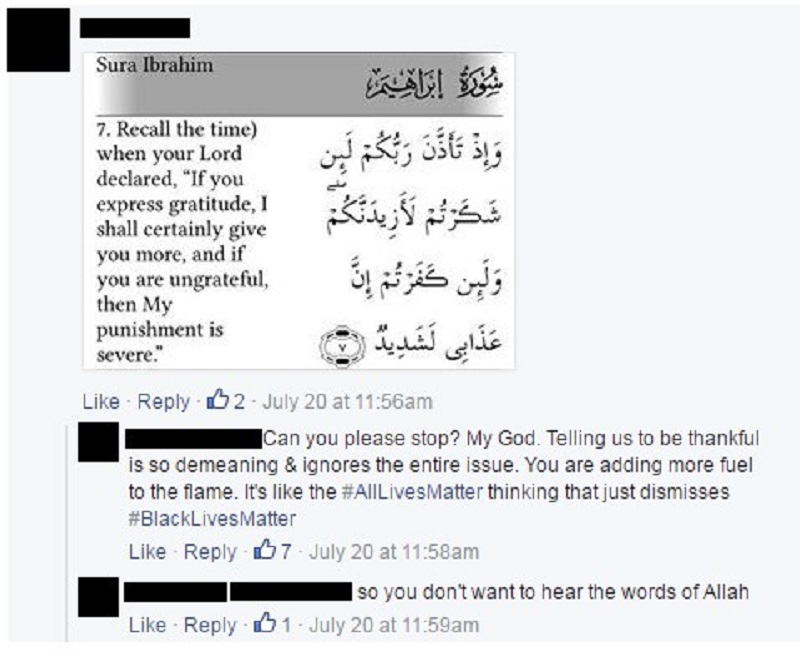 Personally, my favorite rationale on the feed (*note the sheer sarcasm) was the amount of women bringing down their own. Even worse, silencing them, as men have done for centuries.

In reference to many stating they wouldn’t be attending the event due to the lack of female representation, comments such as, “Thank you for letting us know you won’t be attending. I’m sure this event will be a million times better without these feminists complaining instead of saying Alhamdullilah,”literally began to flood the feed.

NOW I DON’T KNOW ABOUT YOU, AND MAYBE IT’S JUST BECAUSE I’VE HAD A REALLY LONG WEEK, BUT I AM SO EXHAUSTED FROM HAVING TO DEAL WITH OTHER MUSLIM WOMEN WHO SPEW THE WORD FEMINIST AS AN INSULT, NOT REALIZING THAT THEY ARE PART OF THE PROBLEM.

So, I’m going to try and break down why the representation of women at these events matter,  how all too common Muslim male misogyny perpetuates stereotypes, and note how many kick ass Muslim women actually existed so you can stop shoving out-of-text hadiths down  my throat.

I find that whenever a Muslim woman begins to speak up about her rights, Muslim men stand up without hesitation reciting verses of how men and women were created differently with specific roles to each gender. Why isn’t this same ideology applied when addressing the panel?

As Muslim women, we go through our own experiences, and we’re tired of having to listen to men give us lectures on things they will never have to encounter first hand.

If history is any indication, diversity is difficult, people. But we need that blend of differences to grow, regardless of how uncomfortable it may make you feel. If it does make you uncomfortable, it’s called cognitive dissonance. And although it may give you mental stress because we may not be on the same page all the time, when you put yourself out there to gain knowledge from someone different than you, i.e., the opposite sex, you come out of it learning something important. You can’t go around the rest of your life thinking your way is the only way.

The more diverse an organization or workplace, the more successful the environment, and the greater possibility it strengthens groups. That is what the Muslim Ummah needs right now – diversity.

Many people from IlmFest 2016 noted that it was not a lack of willingness to include Muslim female speakers, but a lack of available female scholars available to speak. If that is the case, maybe a little help is in order. Here is a list that you can sift through for your next conference. It’s from the Muslim Women Speakers Organization, in alphabetical order. You’re welcome.

But let me get back to complaining for a minute…

Moving on to the very blatant misogyny displayed on the feed, (again, by both men and women! Shame on you!), let’s take a look at how this rhetoric can effect our community. Seriously people, it’s ugly. We have enough stacked up against us during this political climate, rather than to worry about attacks from our own community.

Yes, I know I’m complaining, but it has to be said! I’m so tired of Muslim men claiming “You should know your worth in Islam sister!”  Yet, they go on to treat women in a manner that is in no way shape or form condoned by Islam. Representation of Muslims in the media starts with us.

They need to acknowledge the cultural mistreatment of women, and that religion has nothing to do with the chauvinist opinions.

Our men cannot continue to silence us, sisters. And how are they doing that, you ask? Well, when they question serious issues regarding women and pose it as an issue of hayaa/modesty and a lack of adab (etiquette), they are silencing us.

Even before her marriage to the Prophet (p.b.u.h.), Khadija Bint Khuwaylid was one of the elitist figures of Makkah, running an incredibly successful business.

Nusayba bint Ka’b Al Ansariyya, who fought in the Battle of Uhud, sustained several lance wounds from protecting the Prophet. She was a metaphorical beast in her loyalty to the Ummah!

Remember Khawla b. Al-Azwar, who was described to have skills and fighting abilities that could rival Khalid Ibn Al-Walid? Yeah, we still have women like that today, but they’re are being shut down whenever they’re promoted in our community.

Most of know Aisha for her contribution to hadiths, but she also played a central role in the politics, leading the battle of Basra in 656. Aisha was involved in both political and public life, ideas which seems to clash with modern day conservative opinions of the roles of women.

Yes, our women were feminists of their time, fighting for their Ummah, and leading by example. Obviously, these are only a few that I have mentioned, but they were exemplary women in Islam.

Maybe if we had more female scholars speaking at Ilmfest 2016, we would have the opportunity to be enlightened by their dissemination of knowledge.

TO MY MUSLIM BROTHERS, WE ARE DONE WITH YOUR SEXISM. WHAT IS SO THREATENING ABOUT A FEMALE WITH AN OPINION? I MEAN REALLY, OUR VOICE MAKES YOU WANT TO RUSH AT THE FIRST CHANCE TO SILENCE AND MOCK US?

No more, “Oh, she just can’t take a joke!” or, “Haha! Women just stay in the kitchen.” Seriously, man, step up to the plate and be the Muslim the world needs – the man we women would like you to be. Join us is uplifting women – not put us down or silence us.

The issue with this panel thread is so much more than just adding more female speakers on your lineup for a conference. It’s a micro representation of the latent misogyny that occurs every day in the Muslim community – and it needs to come to an end.

At the time of the Prophet (p.b.u.h.) when an issue of concern was mentioned, it was addressed, not rushed to be shushed and point out the fault of others. Acknowledge that the representation of Muslim women scholars is lacking, and that the treatment of Muslim women as a whole has suffered a serious decline. Let us work toward being supportive of one another, and an Ummah the Prophet (p.b.u.h.) would be proud to call his own.

Contributed by Nora Khalil on muslimgirl.com