By Mustafa Nazir Ahmad for The News On Sunday

A conversation with veteran classical dancer, Sheema Kermani on what inspired the dhamal at Lal Shahbaz Qalandar’s shrine, her art and much more 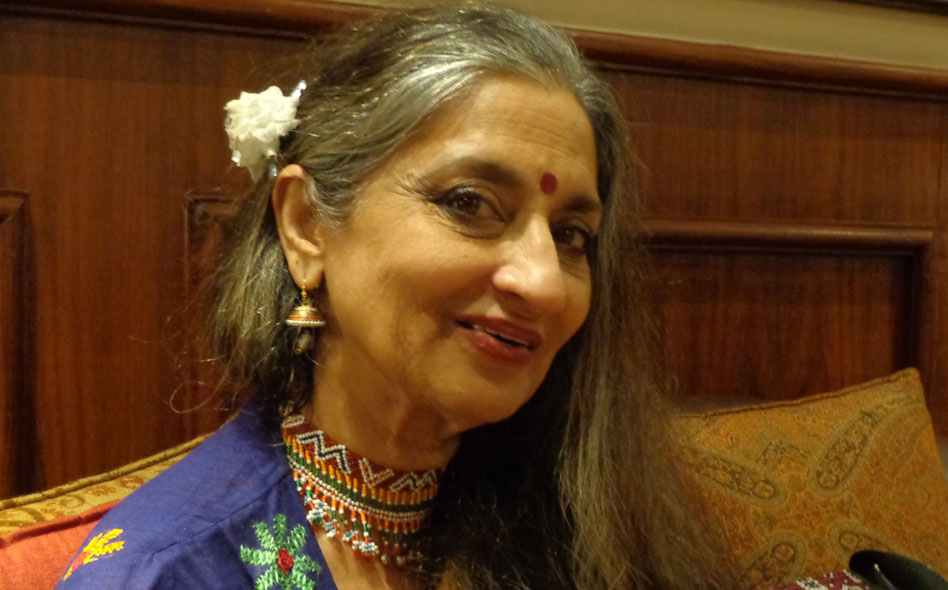 February 27, 1999. Pakistan Peace Coalition Conference, Karachi. Facilitating the session on ‘Art, Culture and Peace’, the confidence she exudes and the passion that drives her leave an everlasting impression. If there were a peace or human rights or cultural activist worth one’s salt, I had thought at the time, her name was Sheema Kermani.

March 8, 2017. HRCP Conference on ‘Opening Spaces for Women Human Rights Defenders’, Islamabad. Speaking at the event being held to mark the International Women’s Day, just two weeks after becoming one with the voiceless in a historic act of defiance at Sehwan, she makes a compelling case for a secular Pakistan led by women. Eighteen years had not blunted her spirits a bit despite the visible white hair that only sought to compound her appeal, as if by some Qalandar-inspired divine intervention.

Four days after the HRCP event, when Sheema Kermani was visiting Islamabad for another conference, I got the much-awaited opportunity to interview her and ask her about what inspired the dhamal at the shrine of Lal Shahbaz Qalandar, what makes her relate to the oppressed, what made her choose dance as a form of expression, and much else.

Kermani’s first reaction after hearing about the suicide attack on the shrine of Lal Shahbaz Qalandar, in which 88 innocent people lost their lives, was of horror and anger. “The majority of devotees at shrines are women and children; it is not attacking the authority or powerful people.” Next, a terrific sadness engulfed her. “The combination of these feelings made me go to Sehwan and do dhamal.” She humbly adds that this was not just her idea and many people were planning to go to Sehwan in the aftermath of the attack.

Our group of hundred or so concerned citizens from Karachi, Hyderabad and Jamshoro started dancing on the road to Sehwan itself, Sheema recalls. However, she did not anticipate that her dhamal would become so popular to encapsulate the mood of the nation tired of years of terrorist attacks. “We did not even take the media with us. The whole idea was that dhamal is a centuries-old tradition and it must continue. People were waiting for someone to make the first move and it clicked.”

Despite the warm reception it received, the dhamal at the shrine of Lal Shahbaz Qalandar is not the first time Kermani has outdone her own expectations. She draws a parallel with her first dance performance as a soloist in the early 1980s, when hundreds of people turned up at an event being organised for a small invited audience. “It was General Zia’s time, so my dance became political in that sense. The dhamal was no different.”

But from where does she find the conviction and strength to raise her voice for the voiceless in a way that she becomes one with them?

“I feel part of those who I support, whether it is the minorities or women of Pakistan. I have seen their frustrations and helplessness first-hand, thus I feel strongly about them and get emotionally attached with the issues that concern them.” She maintains that she is not doing it for others alone, but for herself too. “I am also not doing it on anyone’s behalf. I am doing it since I feel I am part of the powerless. I don’t separate myself.”

Kermani contends that it is our duty as citizens to stand up for the downtrodden in the society. “For instance, if the Christian community is being targeted, non-Christians should be standing at the forefront to defend their rights.” However, reluctant to share what makes her so fearless, she retorts: “I have only loved truth, beauty and revolution, then why fear?”

Kermani founded Tehrik-e-Niswan in 1979 to end the discrimination that exists in a class society, particularly against women. “I wanted to create a platform where women could find space to express themselves.” Identifying working women as the most oppressed of the oppressed, she organised them in trade unions and also arranged adult literacy classes for them.

She deplores that women’s economic independence is not discoursed, though “it is a huge step for her freedom, liberation and independent choices in life.”

Sheema firmly believes that women would be the harbingers of change, but not until “religion becomes a private matter”. Aptly, she also brings in the concept of women’s spine: how straight it is, how strong it is and how much power lies within it. “Women have let go of their spine. If they could find that power within themselves, they would be the agents of change.”

The plays of Tehrik-e-Niswan also reinforce the same message. In one of the community plays, women travelling in a bus throw out a fellow male passenger who was trying to touch them. “After watching the play, many women turn up to say that now they feel they must not be quiet and let men run over their bodies like they do. When you bring it to that point, women are ready for change because they have had enough.”

In line with her assertion that men use religion as a tool to exploit women, Kermani contends that no religion asks women not to stand straight or be ashamed of their bodies. “The minute a woman stands straight, she feels strong and no male can harass her.” She adds that what dress a woman wears does not matter; what matters is “her stance, physical being, presence and aura”. She asserts that dance also energises women and gives them the energy to overcome their physical weakness through an intellectual understanding of it.

The Urdu adaptation of Aristophanes’ play Lysistrata, first performed in 411 BC, by Tehrik-e-Niswan is in harmony with Kermani’s firebrand reputation. In Jang Ab Nahin Hogi, Pakistan and India become the two warring tribes of the original Greek play who signed a peace agreement only after the women decided to deny conjugal rights to their husbands. The play, which has been successfully performed in both India and Pakistan many times, “empowers women since they feel inspired that there is a possibility of a different kind of a world.” She hastens to add that “we are not suggesting that women should do this, but just saying that there are options.”

Strange as it may seem, dance was not Kermani’s first love. It was painting! She went to an art college, held solo exhibitions and taught fine arts for a few years before turning to dance, which she had been learning as one of her hobbies. “I became a performer when I realised that dance was being totally suppressed in Pakistan.”

Her rebellious nature has always made her do things that are different. When decided to become a performer, hardly anyone in Pakistan was dancing. “Why should I not dance and why should dance be a dying art form?” However, more than a dancer, Sheema wanted to be a storyteller. “I understood that dance is all about storytelling, especially in the sub-continental tradition.”

Kermani recalls that when she started performing, people used to object that dance is not our culture. “I used to say in response that I am not a Saudi Arabian and my culture is not from Saudi Arabia.” She asserts that our future is tied to our past. “Unless we acknowledge our rich cultural heritage, which is thousands of years old, we cannot move forward.”

Kermani defines ‘secularism’ as “separation of religion and state in public life”. She agrees that there can be problems with secularism as India seems to be currently experiencing, but argues that perhaps Indians have not been able to practice secularism properly because of “too much of communalism”.

Criticising the Pakistani media for its lack of educative aspect, Kermani laments that not a single channel telecasts any classical music programme or does a discussion on the performing arts. “What do people watch on the media then?” She also decries the media for building hysteria through news and for the tone it employs. Most important, she gracefully ignores the television anchors like ‘Dr’ Amir Liaquat Hussain who had derided her in the recent past and used negative language for her.

Kermani has also co-edited a book, with Asif Farrukhi and Kamran Asdar Ali, titled Gender, Politics, and Performance in South Asia, published by Oxford University Press. The book, published in 2015, expresses various aspects of the social impact of the arts: how culture brings people together and leads to harmony and cohesion, counters violence and aggressive attitudes, and urges people to reflect and think. “The book aims at bridging an important gap in the study of South Asia in general and Pakistan in particular.”

Sheema Kermani personifies courage and civilisation in an era marked by their opposites. She radiates the energy that she suggests other women to find within themselves. She does not believe in art for art’s sake. Her commitment is to using her art meaningfully since that “gives meaning to my life”.