This story is adapted from Broadly's Queerly Beloved podcast.

“I also found out that Middle America hates queers, and they hate Muslims too,” says San Francisco drag queen Faluda Islam during a performance earlier this year, reflecting on her travels in America. “They find them both threatening in different ways. So I began to wonder: What if you were to put the two together?”

At that, she disrobes her long, sequined coat to reveal a silk bustier, a wrap-around belly-dancing skirt, and fishnet stockings. Up top, she is wearing a green headscarf, winged eye makeup that reaches nearly to her ears, and bright red lipstick above her black beard. To an upbeat tune, she proceeds to seduce the crowd with flamboyant choreography—fanning her long, graceful fingers through the air, undulating her stomach, and eventually shimmying into the small club’s audience. She’s received with cheers and thrown dollar bills.

Faluda is the drag persona of Bay Area-based artist and curator Zulfikar Ali Bhutto Jr., known to most friends as Zulfi. And she is not merely about camp and fabulousness; she also has an intricate, futurist backstory that functions almost as speculative fiction. “She is a zombie, she was resurrected through Wi-Fi technology and the way she died was in the future queer revolution,” Zulfi explains. “She’s sort of an oracle...she’s able to give an insight into past present and future.” 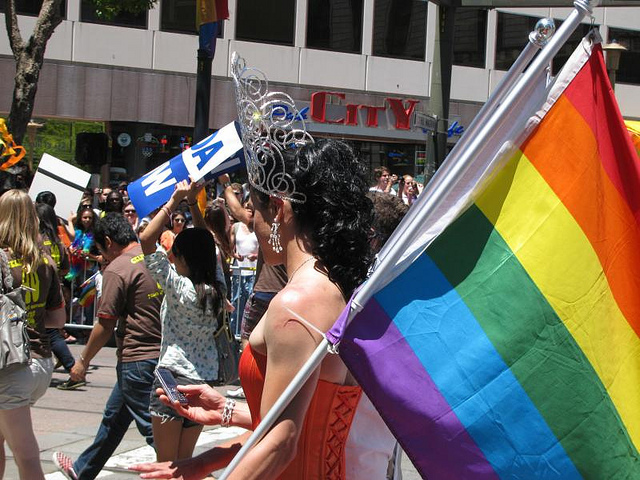 As a character, Faluda is a complex pastiche of many histories and identities drawing from Zulfi’s own identity as a queer, Pakistani-Lebanese-Iranian Muslim. And she often delivers monologues that use satire to get at searing truths about the ways we perceive the “other” as well as queer our hetero-masculine conceptions of activism and revolution. In some ways, her life story is a retelling of that of Zulfi’s father, Murtaza Bhutto, who was a grassroots socialist political organizer in Pakistan before being assassinated when Zulfi was six years old. “Along with that, I talk about injustice, who gets the right to live or die, who is the decider of that,” says Zulfi. “War comes up, aspects of martyrdom come up, Islamophobia comes up.”

As a futurist icon, Faluda Islam’s existence can be traced back to many moments in history. But one you might not expect occurred in early 2015, not long after Zulfi had moved to the United States, settling in San Francisco. He received a call from his then-new friend, Ana Montenegro. She was at a bus stop, crying.

While waiting for her ride, a San Francisco city bus had driven by with an ad that Ana couldn’t believe she was seeing. It featured two images side by side. On the left was a photo of British-Egyptian rapper Abdel-Majed Abdel Bary in a recording booth wearing a tracksuit above the words “Before Becoming Devout.” On the right was an image of the same man wearing a balaclava and holding a blurred human head in his hand, above the words “After Becoming Devout.” Emblazoned above both was the statement: “Yesterday’s moderate is today’s headline.”

“This is like, what the fuck, you know?” recalls Ana.

“Yeah it really was, especially because it was on public transportation,” adds Zulfi. “You’re a Muslim riding a bus—me and many others—and you’re forced to sit in a vehicle that is advertising your expulsion, your criminalization, or simply the paranoia that should be around you, and it was a very scary experience.”

Ana is not Muslim herself, but she had recently come to the US from Colombia to get her MFA at the San Francisco Art Institute, alongside fellow student Zulfi.

“That was the first time I really was made to question where I was,” she recalls. “It really defined our conversations. Where we come from, how people see us, and the differences and similarities between us.”