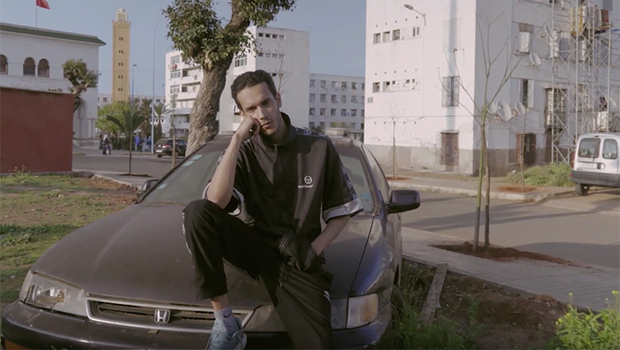 Of the many musical genres birthed in the States, trap has lent itself especially well to the development of a genuinely international and de-territorialized sound, magnetically attracting more traditional sonic cultures and styles across the globe. Morocco’s ‘trap’ scene in particular is remarkably robust; in a country lacking serious music industry infrastructure, a growing number of trap artists have found major local popularity, blending Auto-Tuned vocals delivered in Arabic and classic TR 808-generated beats with elements from traditional music such as the Algerian-born raï.

Among these artists is Issam, an eccentric, effortlessly stylish 25-year old Casablanca native and self-described “child of the internet,” whose songs and videos offer a lens onto contemporary Morocco's urban culture. Issam has gained fame with releases such as “Hasni,”his tribute to the legendary raï performer Cheb Hasni, “Rolex,” and “Bavra,” an exuberant club track that has garnered nearly two million YouTube views to date. Today, he’s debuting “Caviar,” which finds Issam in a more sentimental register, lamenting experiences of cultural exile over a Hasni-sampling beat by French producer King Doudou.

The “Caviar” video, produced by Paris-based Arab arts collective NAAR, extends this melancholic atmosphere, with Issam lingering in front of apartment bloc gardens, a barber shop, a public soccer pitch. Originally planned to be partially shot in Paris, the video’s somber tone mirrors Issam’s reality as a Moroccan artist, as his visa application was recently denied by the French government. The track and its video showcase an increasingly globalized scene in which Arab artists nonetheless remain peripheral participants, due in part to the significant political difficulties in bypassing borders and enjoying the freedom of movement granted to Western performers.

“Caviar” will be included on SAFAR, an album of collaborations between Moroccan and European trap artists such as Shayfeen, Madd, Kaydy Cain to be released by NAAR later this fall. On a call linking Casablanca, Paris, and New York, I spoke with with Issam and NAAR co-founder Mohamed Sqalli to discuss the present and future of Morocco’s rap scene, the role of the Internet in establishing new genres, and the long-term goals of NAAR as a promotional platform for Arab artists in Europe.

Tell me a bit about yourself.

ISSAM: I'm 25 years old, I was born in Casablanca and have lived there since. Up until two years ago, I wasn’t really listening to rap — I was listening to lots of music on SoundCloud, which eventually led me to a lot of rap. Listening to rap felt really good, so I thought to myself, "Why not record my own tracks?" I released “Taba Taba,” which people really seemed to like. That’s how I began to gain recognition, and it made me want to continue making music.

Is there something specific about rap that's comparable to Moroccan or traditional Arabic music?

ISSAM: Innovation is an essential part of music. There wouldn’t be any value in trying to make copycat versions of tracks by Travis Scott or Young Thug. I’m very inspired by these artists, but I’m more interested in making music that includes elements from my home culture in Morocco. I have a lot of pride in the music I’ve released so far, since I’ve created something original that blends these two cultures. Also, this kind of music is more appealing to an international audience. I’ll achieve more success at an international level if my music doesn’t sound like anything people have heard before.

Tell me about “Caviar.”

ISSAM: Last year, I released “Hasni,” which I think can be considered the first track combining trap music and raï. I continue that with “Caviar,” which was made through NAAR. The track was made in collaboration with King Doudou, who uses a sample of Cheb Hasni for the instrumental that I rap over. It deals with the theme of exile and the experience of living far from home. It’s a theme that’s very close to Cheb Hasni, and a concept that’s pretty universal across the Maghreb. It’s familiar to many people, since we’re all exiled from somewhere in some way. “Caviar” has to do with time and the distance that we have from our childhood. When we’re kids, everything appears to us like caviar — everything is delicious, wondrous, and super, but over time, everything spoils a bit. I want my listeners to experience an emotional impact when they listen to it.