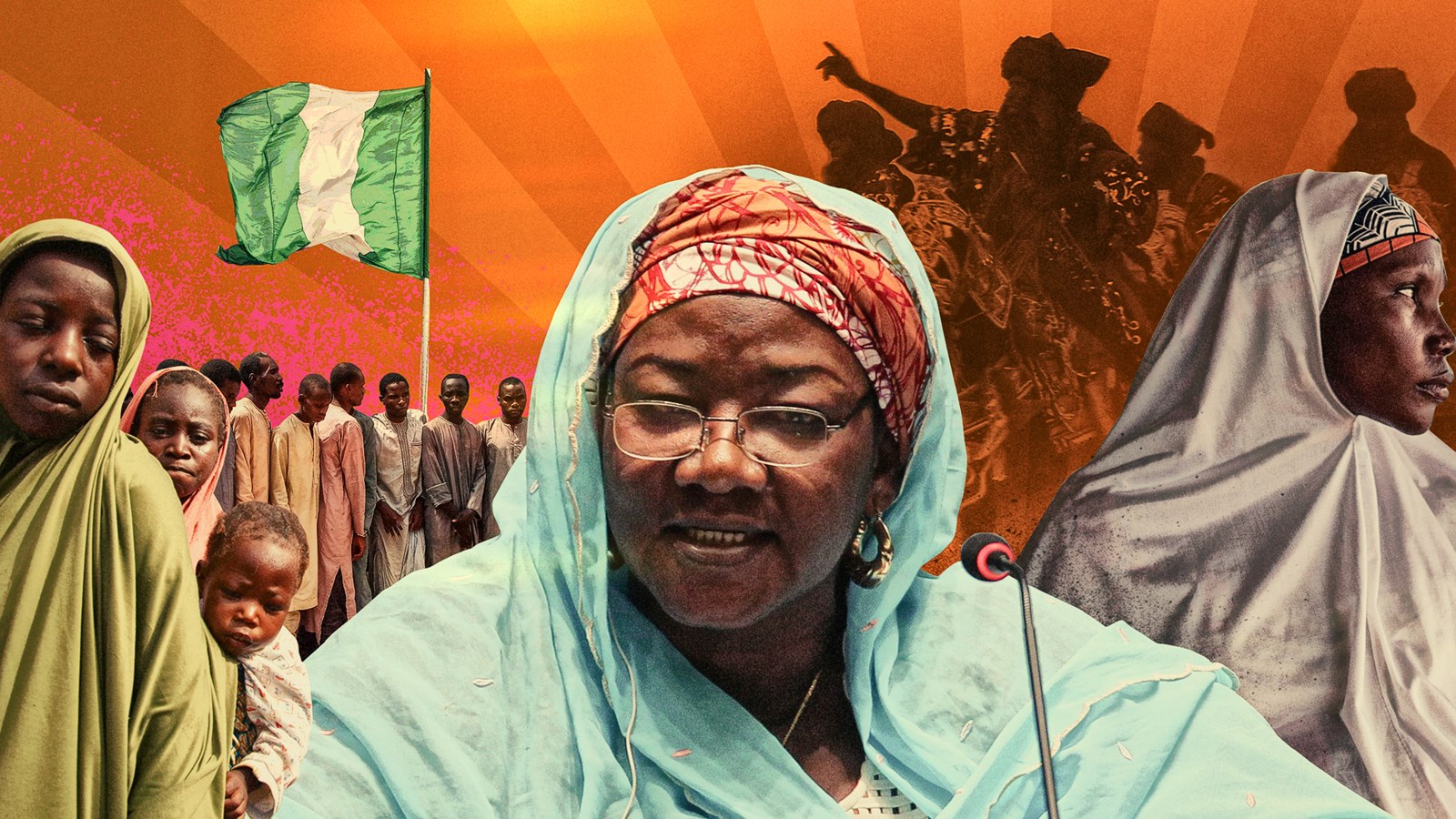 Few people talk openly about Boko Haram in northern Nigeria. Even fewer talk tothem. But in her motherly way, the simple-looking Hamsatu Allamin is fearless and unapologetic. “I talk with Boko Haram even today, and they are open to [a] peace deal,” says Allamin, 60, sitting cross-legged on the floor of a yellowed bungalow, her veil circling her face and spilling down to the gray-green rug.

This educator-turned-mediator looks anything but imposing. But she cracks hard ground digging for peace in a nine-year civil war that has killed 20,000 people. So how can a woman speak to a sect that keeps women silent and slaughters them for not wearing veils?

In this war-ravaged part of the country, the answers are retold with a personal bent and remixed city to city. “If that woman is not a member of Boko Haram, they would have finished her,” a friend in the northern city of Maiduguri, Ahmed Abubakar, tells me. “But if she is not one of them, then she must be a powerful witch using a mysterious power to make them impotent.”

On a recent overcast morning, Allamin, who left public service in 2016 after more than 30 years as an educator, reveals how she might have charmed Boko Haram. Not with witchcraft, but with infectious smiles and a love for listening — all squeezed into a carefree courage that can be disarming even for the deadliest sect in the world.

IT IS ALWAYS IMPORTANT TO SPARE A PEACEMAKER IN EVERY VIOLENCE.

After all, Allamin is a daughter of their soil, from an elite Kanuri family, the same tribe from which Boko Haram emerged. She knows the insurgents and their parents, who were her schoolmates, and she’s proven herself to the insurgents as a good and useful mediator. Working with her husband, a local chief in Konduga, she has resolved complex local disputes, including intervening to prevent the traditional practice of girls marrying under age 18.

Before the war escalated in 2013, Boko Haram insurgents lived in the communities — turning homes into hiding places after launching attacks on military units. “If you report them, you and your family would be the next target,” says Allamin. But the destructive cycle around her forced her to act. After hit-and-run attacks in Maiduguri, the military would invade the communities, searching for perpetrators and arresting every youth in sight, including the innocent. Houses often were razed.

So Allamin started reporting perpetrators to the military, talking to the insurgents about peace and sometimes confronting the insurgents who “brandish their cutlasses” in threat. “Gradually, even Boko Haram understood I was harmless, and they started opening up to me,” she says. As Nigeria-based analyst Justice Nwafor points out: “It is always important to spare a peacemaker in every violence.”

It’s not as if Allamin is taking the insurgents’ side. She helped organize the global “Bring Back Our Girls” campaign — garnering attention from then–first lady Michelle Obama — after Boko Haram abducted more than 200 schoolgirls in 2014. And she’s led the fight to empower women who have escaped their reign of terror. Allamin now tends to more than 30 former so-called wives of Boko Haram from displaced persons camps. She creates a small social network for them, with plans to send the younger ones to school and train the older ones in a trade — though some are pregnant with the offspring of the insurgents.

According to United Nations data, some 7.7 million people — half of whom are children — in northeastern Nigeria need humanitarian assistance. Women wait in line with their children during a community outreach drive sponsored by the International Rescue Committee in Maiduguri, Nigeria, on Oct. 12, 2016.

Still, Nwafor says Boko Haram appears to value Allamin’s skills more than the government. Allamin organized a peace meeting between the Nigerian government and Boko Haram in 2015. The deal failed because of the government’s “lack of interest in peace,” she claims. The government, as is the case on many Boko Haram–related topics, doesn’t comment on Allamin’s efforts.

Peace talks have sputtered on in the years since, and the horrors continue. “Life under Boko Haram is bitter, and women were not allowed to talk or come out of their homes,” says Fatima Umaru, a refugee whose community, Bama, was under Boko Haram rule for eight months before the military recaptured the town in 2015. But military rule comes with its own set of problems. Amnesty International reports that military officers and members of the Civilian Joint Task Force in the northeast have raped and sexually exploited women and girls, often in exchange for food and other necessities.

Families across the region have been shattered by indefinite military detentions. Allamin brought together 1,600 women and girls in what she called the Knifar Movement to increase pressure on officials to release their husbands and fathers, while also pursuing justice against soldiers and others accused of rape.