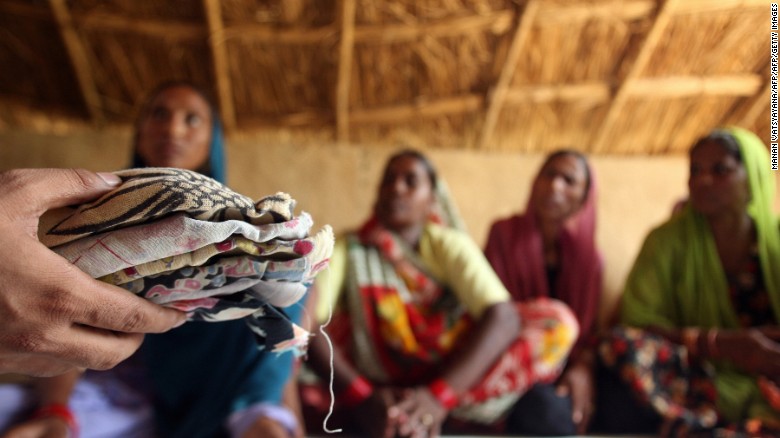 The first time twelve-year-old Maya got her period, she thought she was dying of blood loss. Maya, like many little girls, didn’t really know what the period meant. She ran to her mother and said she was dying. Her mother laughed and held her in her arms. She explained to Maya what a menstrual cycle was and how a sanitary napkin was to be used. Unlike Maya, many little girls aren’t taught about sanitary health in India. “Maya” in Hindu philosophy means ‘illusion’.  Thousands of girls in India today live in the illusion that the menstrual cycle is the wrath of God and that it makes them impure.

In India, not only is menstruation frowned upon, but women are considered impure and polluted. This idea gained prominence during the medieval age in India where women started losing their status as an equal to men. The Hindu text Manu Smriti propounded the idea that women weren’t equal to men. This led to the degradation of women, which in turn led to the idea that women should confined as they were “dependent” on men.

The idea of menstrual blood being impure may have started within the Brahmins, who didn’t let women perform basic actions such as cooking or performing art when they had their period. Women were confined to a separate room until the menstrual cycle was over. Today, this idea still prevails in most parts of India. In Hindu mythology, the history of menstruation stems from the story in Vedas, where Indra had slain Vritra, the three-headed son of Tvashtri, leading him to be seized by sin and tainted with exceedingly great guilt, as he had taken the life of a Brahmin. Women then let upon themselves one third of his guilt and this guilt of Brahmana-murder appears every month as the menstrual flow.

Some anthropologists argue that the concept of the period being impure and sacred is intertwined. In many cultures, a woman is considered sacred during menstruation. It is thought that the sacred blood being in contact with the material world can lead to it becoming “impure”. This was seen in some tribes in Africa and also in some parts of India, even though this has changed in the modern times. In India, as the status of women degraded, there arose the taboo surrounding menstrual blood.

India, along with its great expanse, also has a huge population. Yet, the literacy rate is low among women in most of the parts of the country, especially in rural India. This can be due to various factors, but one of the major factors is due to girls dropping out from school once they have their first period. Women also lack the knowledge of basic sanitary hygiene. According to a study, only 55% women think of menstruation as a natural process, and only 50% of women use clean methods to deal with menstrual hygiene. Women in the rural areas use wood shavings and cotton cloth to absorb blood, while some even use soil and ash. Such methods can cause severe infections and lead to death.

Women also do not have access to sanitary napkins, as they are expensive and are aren’t reusable. The rural women therefore find cheaper means to soak up the menstrual blood. There was a major uproar when the GST (an indirect tax) was levied on sanitary napkins. Sanitary napkins were classified as luxury items and 12% tax were levied on them. Buying one packet of sanitary napkins means an entire family has to go hungry for the next few days. This prohibitive cost hinders the hygiene of most women in India.

The inaccessibility of sanitary napkins coupled with utter ignorance have led to menstruation being a taboo in the country. Unless education about personal hygiene is taught in schools, the taboo and mystery surrounding menstruation are here to stay.