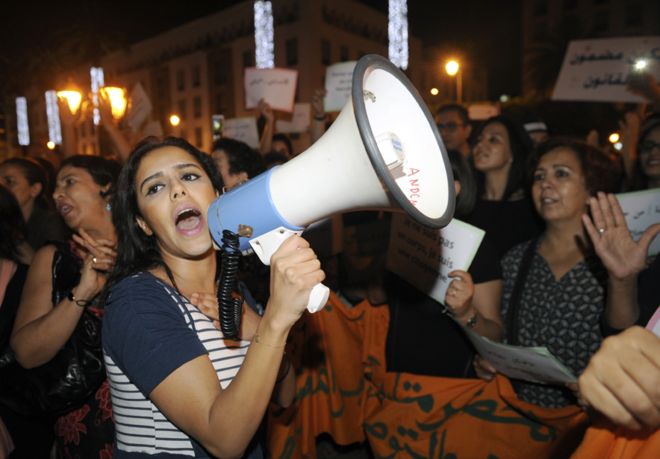 by Morgan Meaker for BBC

In Morocco, it's not easy for women to walk the streets unmolested. Morgan Meaker hears from some who want to put an end to endemic harassment

For Ghizlane Ahblain, the word "whore" is a constant refrain in the soundtrack of her home city, Marrakesh. A stomach-punch of a word, it's hurled from the pink-tinged doorways and from the rickety motorbikes whose engines gasp for breath on the city's choked main roads.

Frustration spills out of the small but fierce 30-year-old Moroccan as she sits on a cafe terrace in central Marrakesh. Like many women in Morocco, Ghizlane experiences sexual harassment on a daily basis. But a few years ago, she started to fight back.  Her tactic is to make a scene, making it harder for men who harass women on the street, both physically and orally. She sparks an argument with the man who mutters: "You've got lovely legs", or loudly accuses another of theft after he makes sexist comments at the bank. "More people should denounce this behaviour," she says. "Men in my country don't know when to stop.

With her master's degree and short skirt, Ghizlane admits she's no typical Moroccan woman. But she's not alone in standing up to sexual harassment.

In Rabat, the country's seaside capital, I wait for Mo outside the central station. She slides along gleaming floor tiles, a curtain of brown hair down her back. Our conversation is awkward. She says she doesn't usually talk about women's rights - her friends aren't very interested.

"My dream is that Moroccan women learn how to stop sexual harassment," she says. "When someone harasses them, I dream of the women breaking his face."

She tried to start a self-defence class but had to apply to the government for permission. Her application was ignored. Instead she's been confronting street harassers herself, one by one. "When someone tries to touch me," she says, "I scream at him. I say, 'Why are you doing this?' These men don't understand. I never get a positive reaction."

But with a draft bill on sexual harassment currently being considered by Morocco's parliament, persistent street harassers could soon face between one and six months in prison or a fine of between $250 (£170) and $1,200 (£800).

It sounds positive. Is there a catch?

"We think it's a terrible bill," says Stephanie Willman Bordat, an American expat who's worked on women's rights here for 21 years. Her office in Rabat is a safe haven from the catcalls and marriage proposals that photographer Frances and I have been attracting on the streets outside.

Later, she emails me a story from 2015 which explains why women don't trust the system. It's from Inezgane, south-west Morocco. After being harassed by a group of men, two women sought refuge in a nearby shop where they waited for the police. When the officers arrived, instead of protecting the pair, they arrested them - because their dresses were, they said, "too short".

But street harassment doesn't just leave women with that silenced, suffocating sense of feeling violated. In Morocco, it also limits their freedoms - the freedom to get an education, to go to work, to feel safe in the place they call home.

And while a shift in attitudes could still take decades, in the short term, reforming the law on sexual harassment does send a clear message - about what is acceptable and what isn't. About who can be picked on with impunity and who can't.

Not every woman in Morocco has the energy to fight back against harassment. Many simply mould their lives around it, avoiding friction. Wandering through Rabat's old city fortress, businesswoman Gitana tells me how she avoids men's comments, and their attempts to touch her, by travelling everywhere by car.

Together, we look down at the beach. The Atlantic ocean blurs into the monochrome Moroccan sky. I notice there are only boys swimming in the water. I ask my new friend, "Do you think, maybe, it would be OK to go swimming… in a bikini?"

Giggling, she says, "I mean, you could…" She pauses awkwardly looking into the blue on blue below. "But I would never…"

I think again of Ghizlane in Marrakech and her daily battles. Before she slipped away into the smoke-laced crowds, she looked at me earnestly, through oblong-shaped glasses, and said: "It's definitely not easy to be Moroccan and a woman.