By Natasha Raheel for The Express Tribune 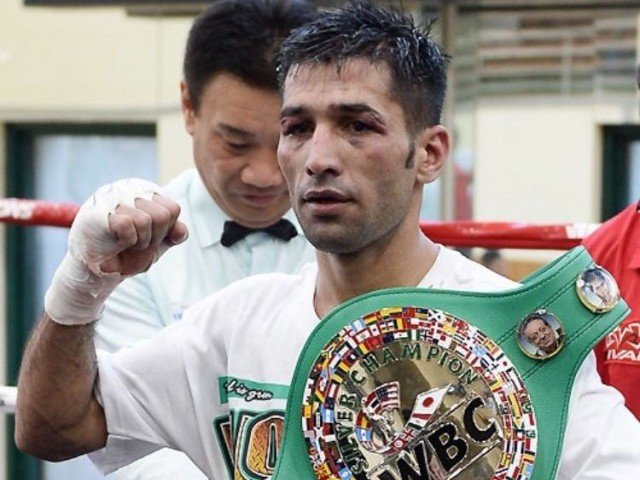 The Quetta-born boxer outplayed Magreamo in a tough 12-round fight and won by a 3-0 unanimous decision.

Magreamo was undefeated in his previous 17 bouts and previously held the WBC International flyweight belt. However, Waseem’s heroics put a dent in the Filipino’s record.

Waseem had captured the Silver title in July by defeating Jether Oliva in what was only his fourth professional bout.

Prior to the match, Waseem told The Express Tribune, “Magramo’s profile is good but it doesn’t intimidate me as I am also undefeated in my professional career.”

The 29-year-old has trained with Jeff Mayweather in Las Vegas the last few months and feels his hard work will reflect in the fight result.

“Only my coach and I know how much effort we’ve put into this. It is not easy and there is a lot of money and people involved; I ran almost 12 miles per day the last two months and went through 120 rounds of sparring,” said Waseem. “My preparation at the end of the day will make the difference in the ring.”

His sentiments were also echoed by his former sparring partner Arshad Hussain, who backed him for a win despite the formidable nature of the challenge.

“I think it will be his most difficult fight, but Waseem is the hardest working boxer I know. He will defend his title successfully,” said Arshad.

Waseem turned pro in October last year and already has four wins, including three knockouts, on his burgeoning CV.

When asked if Magramo could become his knockout victim number four, Waseem refrained from speculating and hinted that his strategy will not be premeditated on ending the fight in a particular round.

“I can’t say I’ll knock him out in a particular round as it is not very nice. I would like to have a knockout win, but it depends on the situation during the fight. I’m very good with body shots so there will be a lot of those,” said the man nicknamed Falcon.